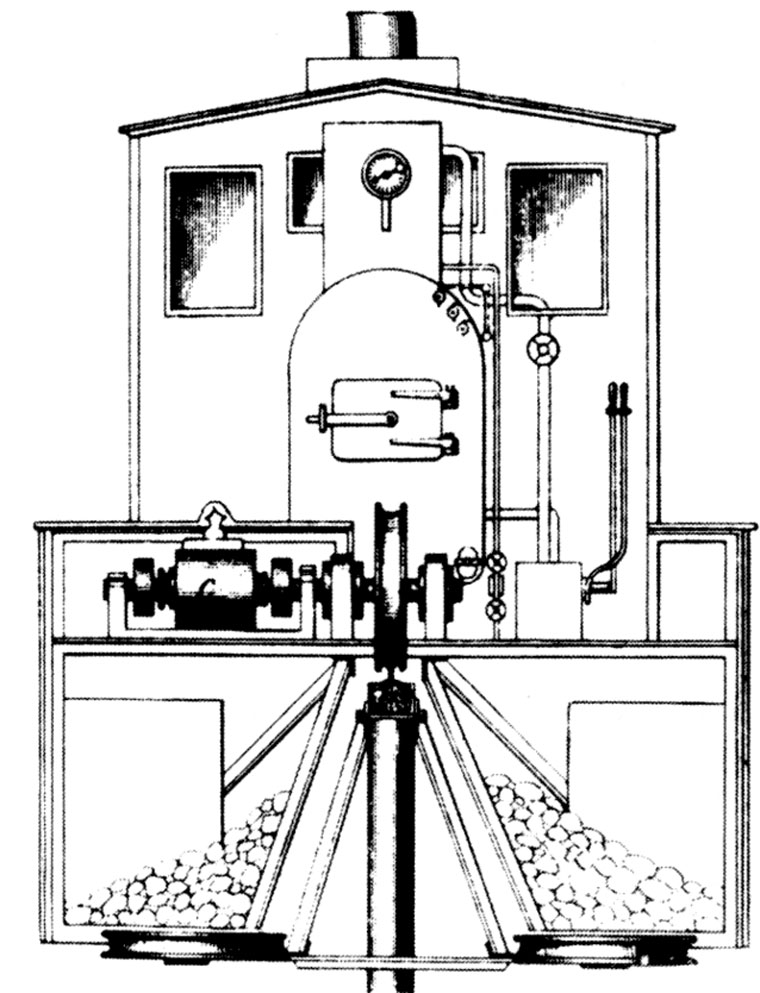 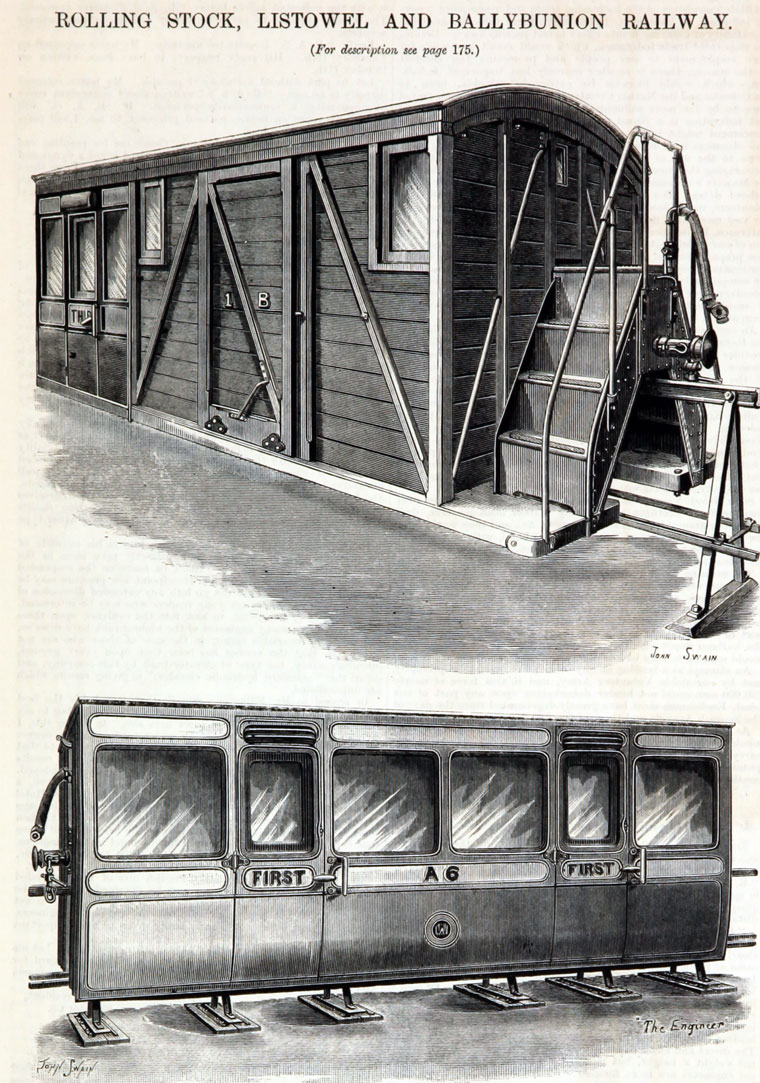 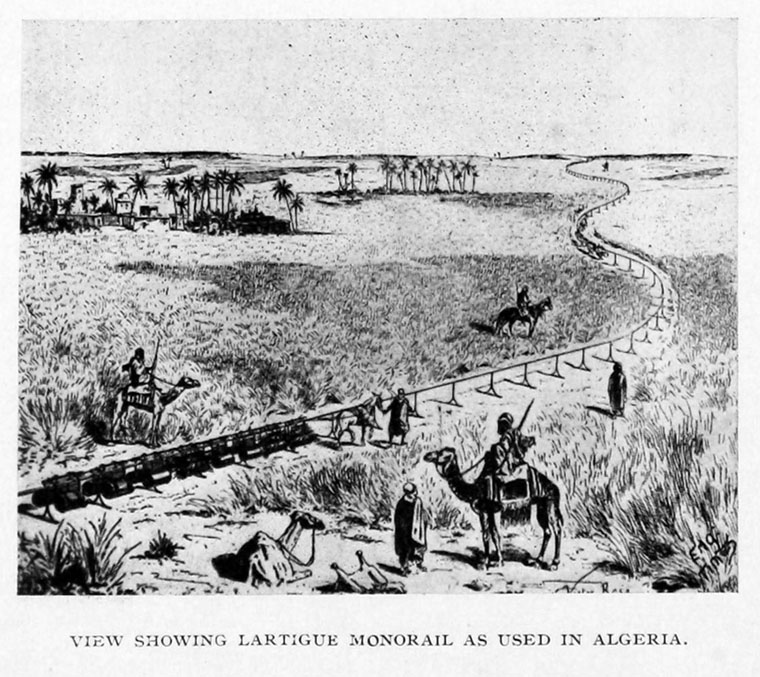 1886 Plan for its first UK installation on the Lynton and Barnstaple Railway.[1]

1888 Lartigue opened a 9.5-mile steam-powered monorail on the Listowel and Ballybunion Railway in SW Ireland

The following description of the Lartigne elevated single rail line included in a treatise on its principal features and advantages issued by the Company, and prepared Messrs. F. B. Behr (managing director) and Georges Petit (civil engineer):—

The Line, which, above all, portable, when applied military, agricultural or manufacturing purposes, is, when reduced to its minimum width, a line composed of rail of the shape a flat bar, extremely rigid when subjected to vertical pressure, but easily bent horizontally. This rail is supported above the ground by trestles or frames, made of angle or any other very stiff section ol iron.

The upper extremity of these trestles is bolted the rail, and the lower extremity rests on the ground, being supported by a bed-plate or sleeper, to which the frame is firmly secured. The sleepers may be different sizes and shapes, according circumstances, and may further be secured in their places, when required, by long pegs driven into the ground through holes drilled near the extremity of the sleepers, thus preventing the line from shifting.

The trestles themselves can strengthened either by cross braces, or struts supporting them in the plane of the Railway, both giving additional stiffness and preventing any movement. These struts would be found particularly useful on heavy slopes.

The rail is divided into such each lengths can be easily handled, and connected by fish-plates, one half of each pair of fish plates being secured to one end of each rail by two bolts two rivets. Two more bolts or rivets connect the other extremity of the pair of fish-plates passing through holes made on purpose.

The other end the rail is provided with two slots on the under side, which fit, or hook on to, the open end the pair of fish-plates. In order to make the joint, the end of the rail is slightly raised that the two slots come over the two bolts between the fish-plates, and, after letting drop into its place, tightening the bolts, and the joint is secure. Two of the holes the fish-plates are oval, to allow for expansion.

As the rail is flat and laterally flexible, curves are made by band, the following way. The line is slightly raised, one man keeping steady at the place where the curve is begin, whilst another shifts the free end the rail in the required direction; the line is then again dropped on to the ground and the curve is made. The direction the line can be changed, if required, in the same way and with equal facility.

The shunting, to pass from one line another, is carried out without any special apparatus, as the line, constructed in the manner already described, contains in itself all that is required for the operation.

It is manifest that this line is above all things easily handled and taken to pieces, there is no difficulty whatever crossing roads or highways on which there is traffic that cannot be obstructed; all that is necessary is to have a loose joint between two rails at one side of the road, and by raising one end of the rail in the manner already described it can be curved aside, leaving the roadway free.

If river has to be crossed, some light piers can be made, if the amount of traffic warrants it, or two wire cables can be stretched across to receive the trestles of the line or it may even be sufficient to construct the trestles of different heights to carry the line over horizontally. If, on the other hand, a ravine has to he crossed, the line can either be carried over it as it would over a river; or it can be taken down the side of the gorge by means of zig-zag lengths which can be connected by curves of as small a radius as ten feet.

On permanent lines, particularly if it is intended to convey passengers, it has been found necessary to arrange matters in a somewhat less rudimentary fashion. Guides to prevent the swinging of the cars and points, sidings, signals, etc, have been introduced, but everything has been done with the same regard to simplicity.

Two grooved wheels run on the rail; each carries fixed axle, the extremities or spindles of which revolve in special grease boxes fitted in a frame, to which is secured on each side of the line, and, by a peculiar arrangement, a kind of car, of the shape and dimensions best suited the work for which it is intended. Owing to the position of the cars their equilibrium increases in proportion to the increase of the load, and several of them connected in suitable manner form the train.

It is, perhaps, well to dwell here on the absolute safety, which is important feature, of this system. The cars cannot be overturned or upset, and, the single rail, running off the line, if possible, would not by any means be so serious an occurrence as on an ordinary railway.

Any system of haulage can be adopted; animal power, steam power, electricity, compressed air, etc, being equally available, and having now all been experimented with on the single rail.

Finally, the arrangement of the trestles the Lartigue Railway renders the attachment of insulators for telegraphic or telephonic wires very easy.

These, generally, are the essential and principal characteristics of Mons. Lartigue's invention, described superficially and without entering into any of the special details construction.