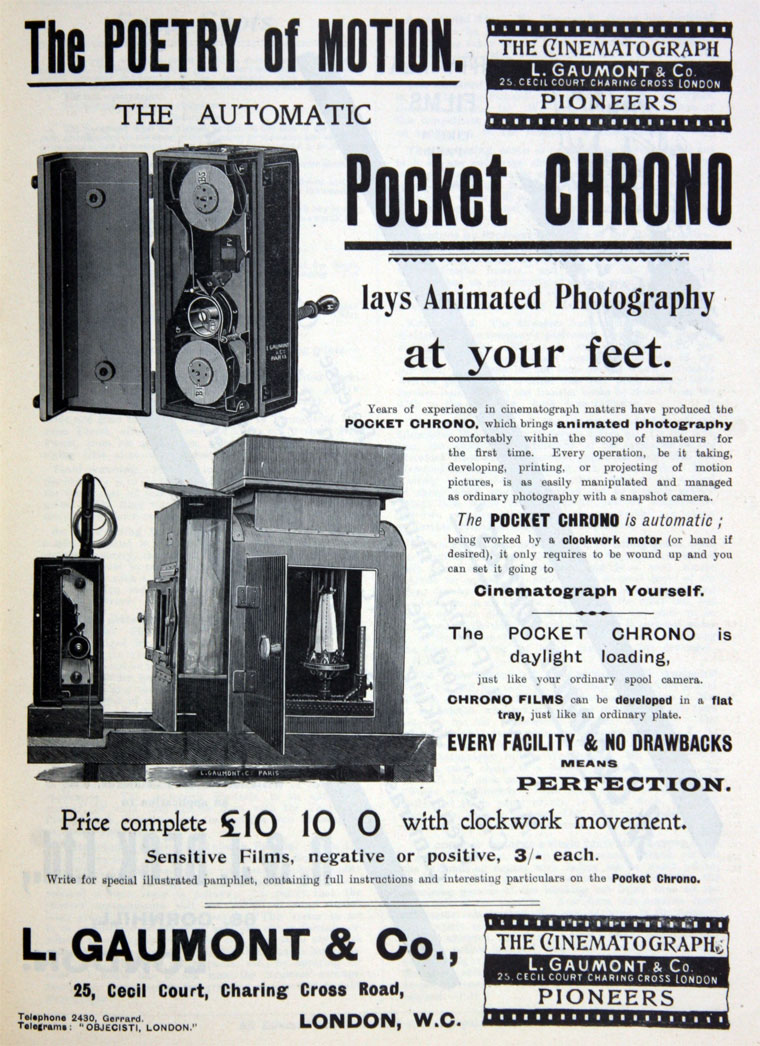 Chronophone equipment made by Léon Gaumont in Paris c.1910, on display at the Musee des Arts et Metiers

The Gaumont Co Ltd., Inventors and Manufacturers of the Chronophone, &c., of 5 and 6, Sherwood Street, Piccadilly Circus, W., and 5, 6, 7 and 8, Denman Street, Shaftesbury Avenue, London, W.

Léon Gaumont (10 May 1864 – 9 August 1946) was a French inventor, engineer, and industrialist who was a pioneer of the motion picture industry. In 1895, in partnership with the engineer Gustave Eiffel, the astronomer Joseph Vallot and the financier Alfred Besnier, he formed a company L. Gaumont et Cie[1]. Initially he sold camera equipment and film. In 1897 he started a business producing motion pictures[2] under the direction of his secretary, Alice Guy. In 1906, the Etablissements Gaumont was founded as a limited company. It flourished until 1914.

1897 John Le Coutour became the British agent for L. Gaumont et Cie handling Gaumont films and Demeny film equipment. Le Coutour was more interested in experimenting with paper films; he founded the Photographic Association; because of this difference in interest, he was dismissed by Gaumont.

1898 Alfred Bromhead, who had been the assistant of Le Coutour, was asked to take over; together with Leon Gaumont he formed the Company; his younger brother Reginald was also involved; the offices were at 25 Cecil Court.

The company quickly became a success and expanded into handling films for Hepworth, Elge (France) and Lumiere (France).

1908 Incorporated as a Limited Company

1912 A. C. Bromhead wanted to move into production so built a studio called Lime Grove in Shepherd's Bush.

1914 Inventors and manufacturers of the Chronophone talking and singing pictures, and the Chonochrome system of coloured cinematography, the Chrono Bioscope, producers of many well known Star films, producers of films of topical events. Publishers of the "Gaumont Graphic" animated newspaper. Extensive theatre, studio, and workshops in Paris for the production of films and manufacture of Bioscope Machinery. Extensive works and studio in London for the production of films. Also an extensive trade done in hiring of films.

1915 Acquired additional property adjacent to the studio and expanded the facilities with more feature film activity.

After the war, the studio struggled to regroup due to a lack of actors and technicians.

1922 the Bromhead brothers bought out Gaumont's interest in the company.

1929 A. C. Bromhead retired. The 5 Ostrer brothers took on control of the studios.

With the advent of talking films, the Ostrer brothers set out to renovate the Lime Grove studio with sound systems. While the renovations were being made, Gainsborough Studios at Islington was used as the production arm.

1937 The Corporation had over 100 subsidiaries and associated companies and many cross-holdings with outside interests; moves were being made to rationalise these holdings[5].

1937 With the British market shrinking, Isadore Ostrer announced that Lime Grove would have to close. C. M. Woolf, one of the original directors of Gaumont-British, and J. Arthur Rank presented a package to take over the production of Lime Grove and move it to Pinewood and let Gainsborough continue its production.

1941 Isadore Ostrer resigned as chairman on the sale of the Ostrer holdings to General Film Distributors Ltd. M. Woolf, J. Arthur Rank and L. W. Farrow (directors of General Film) would join the board with Mr Rank as chairman[6].

1955 Odeon Theatres Limited was renamed Rank Organisation Ltd[8]. One of the main elements of the group was Gaumont-British Picture Corporation Ltd, with its wholly-owned subsidiaries Cinema-Television Ltd, which owned Bush Radio, and British Optical and Precision Engineers Ltd.