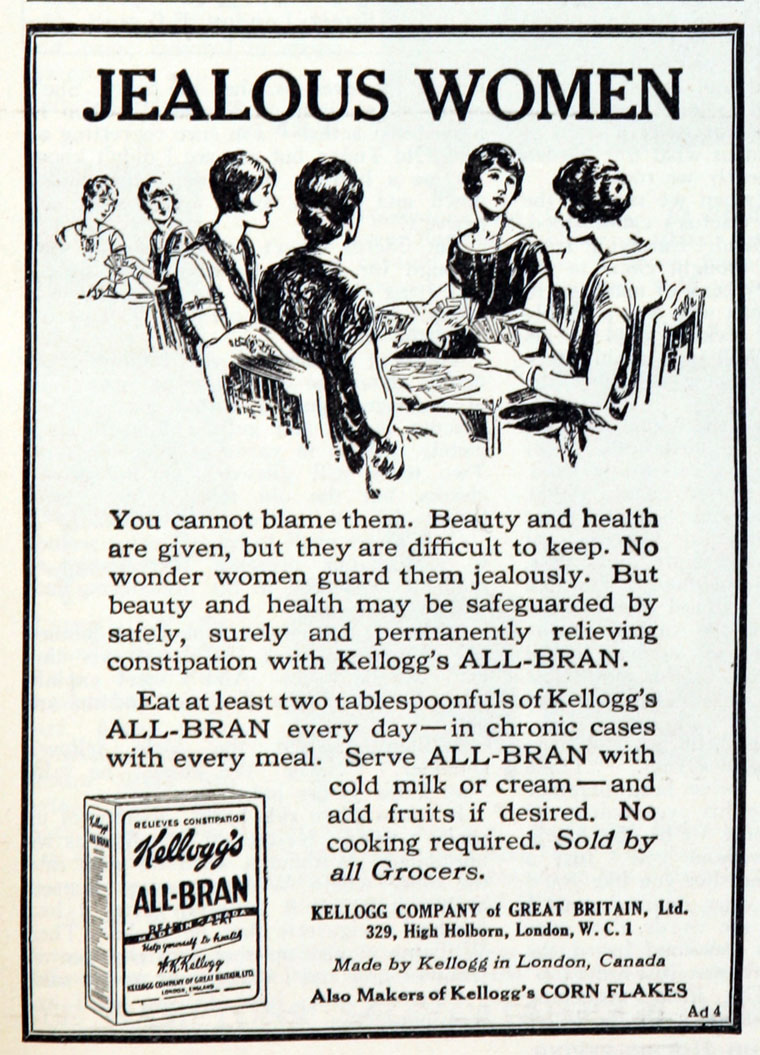 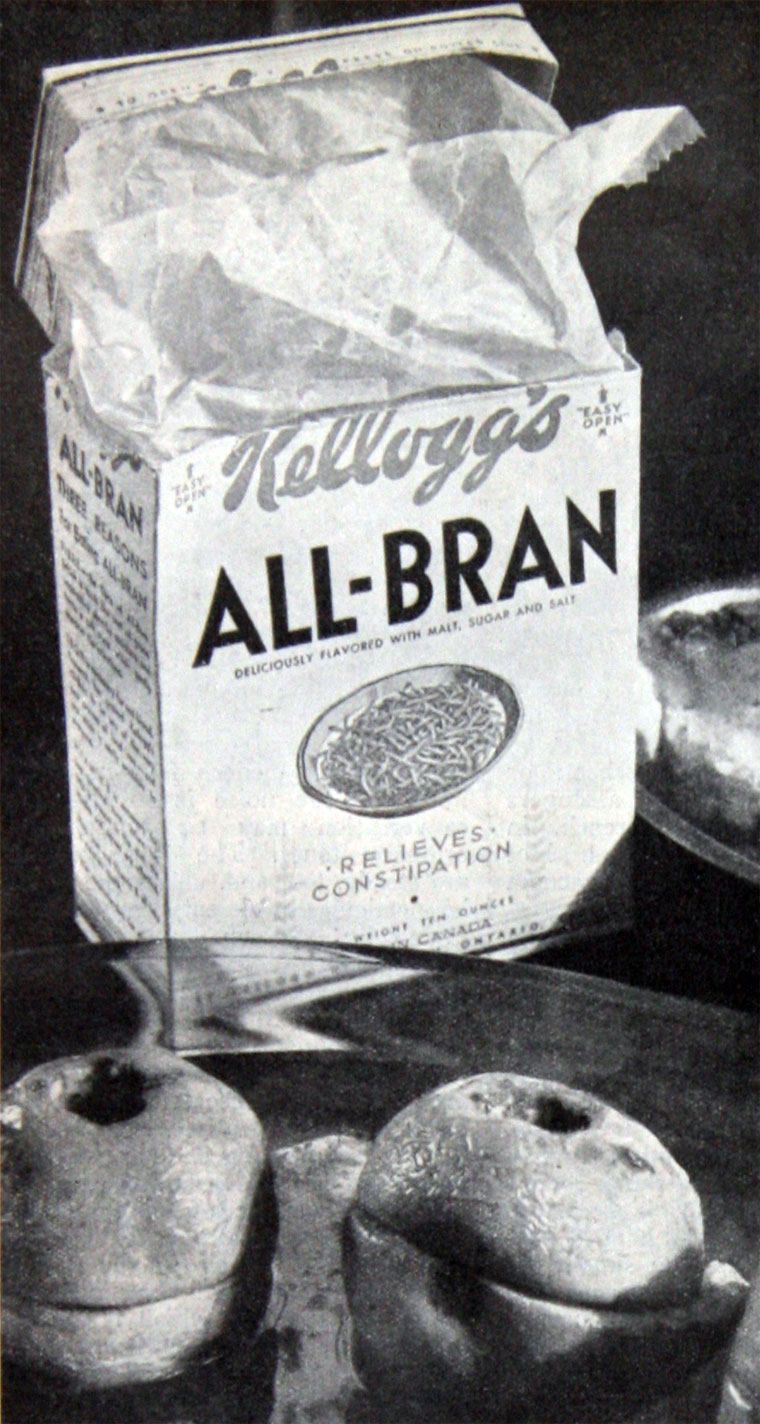 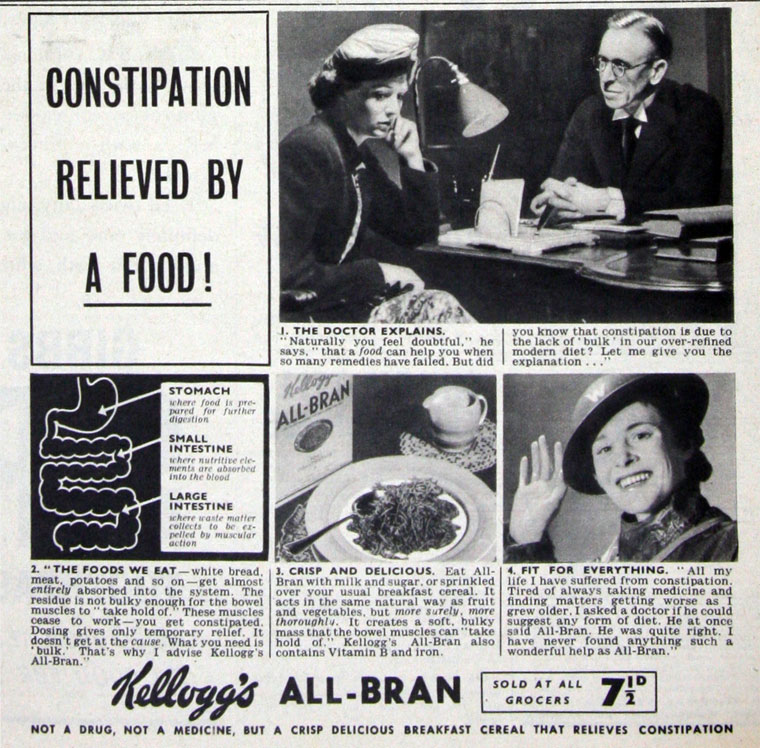 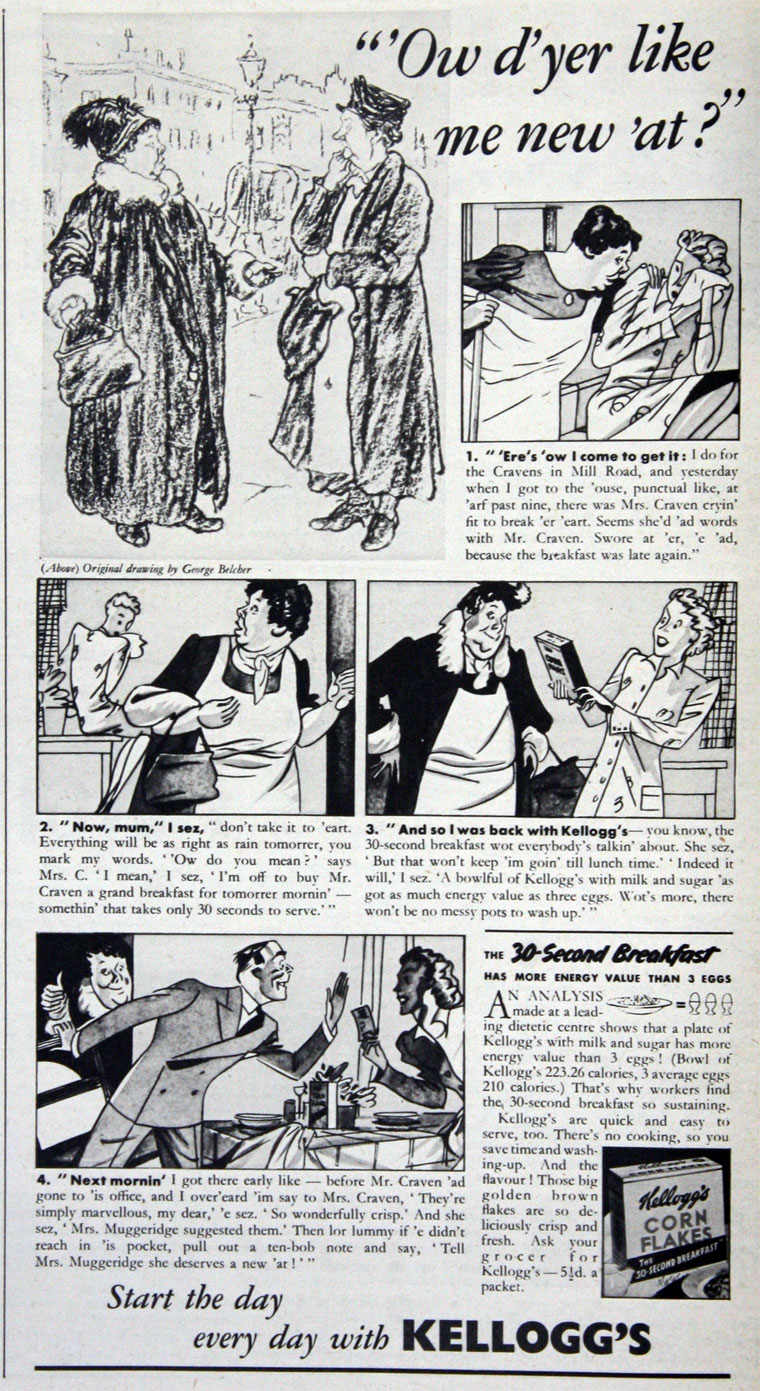 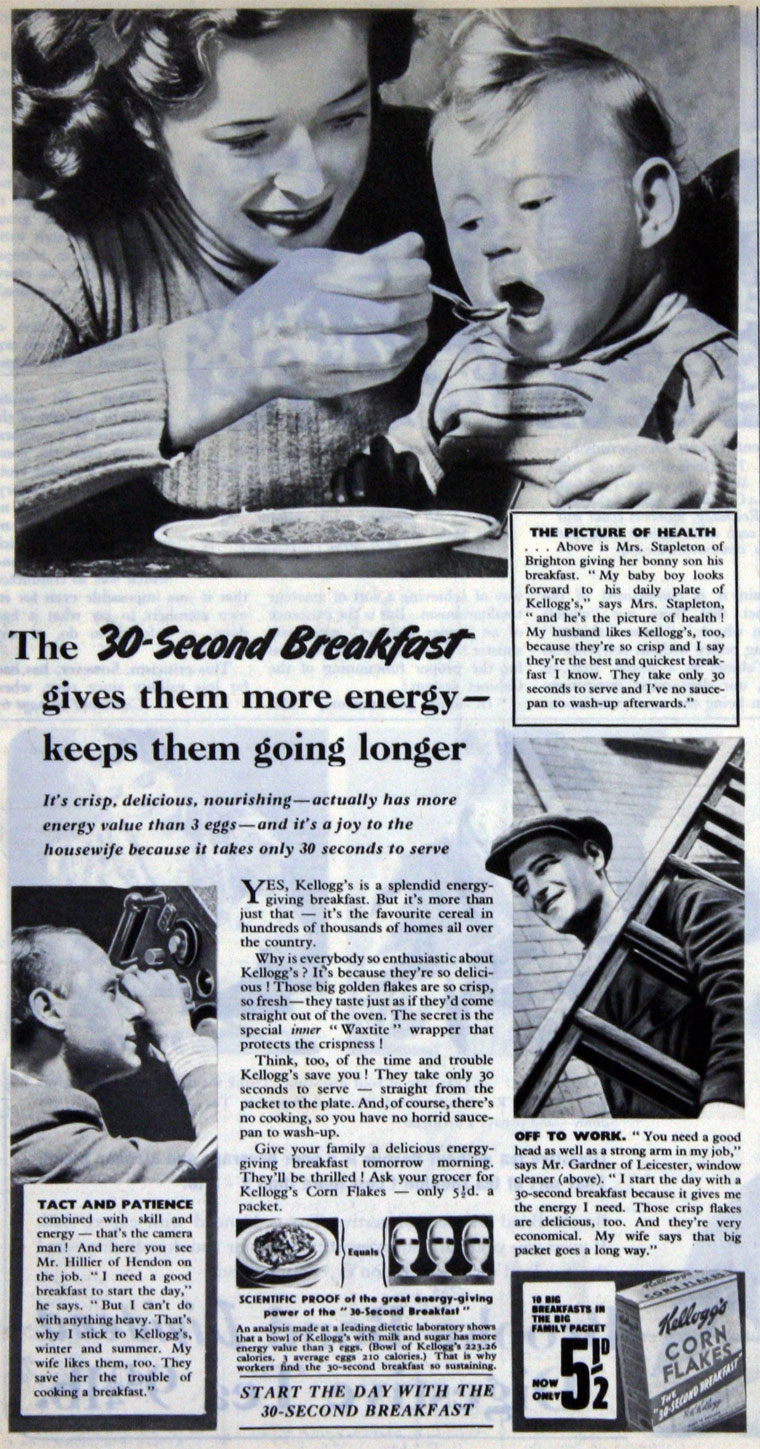 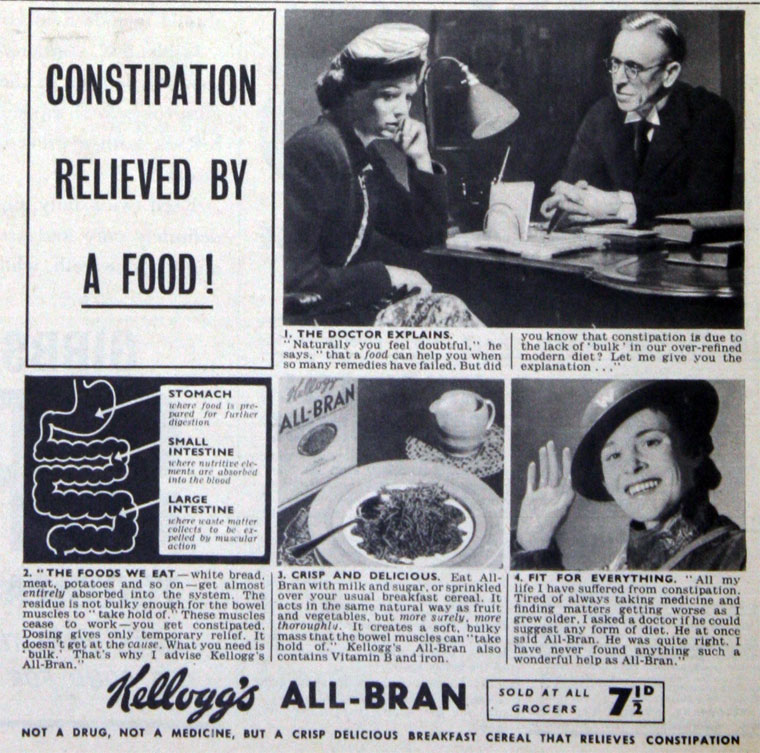 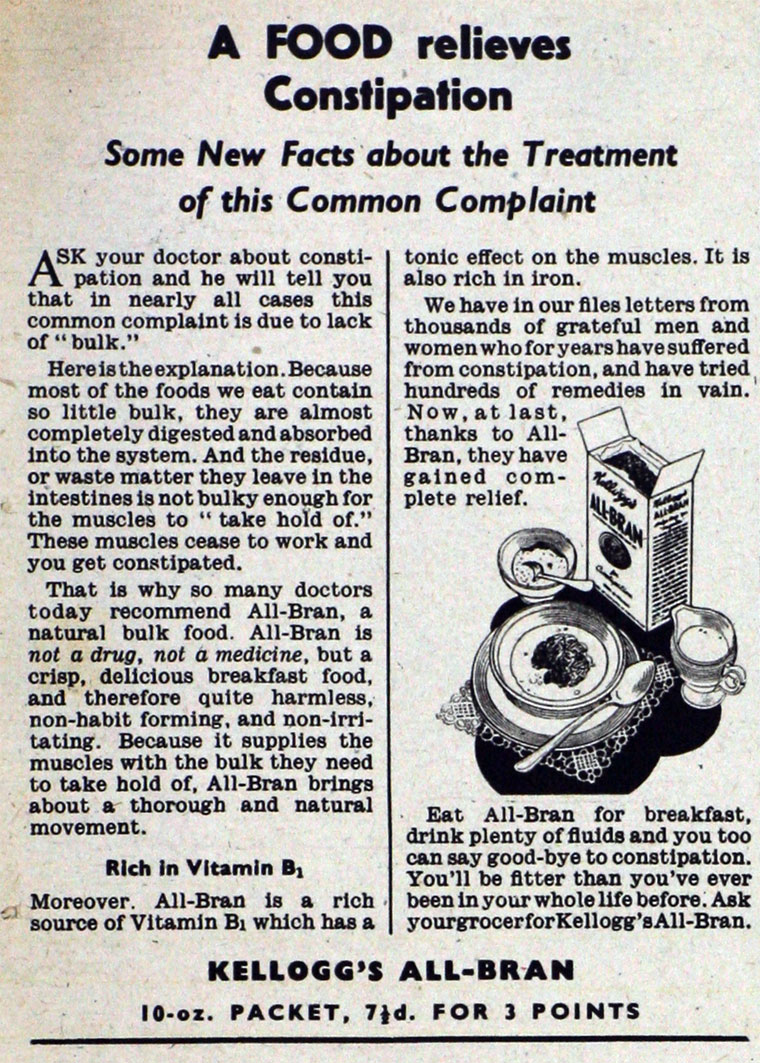 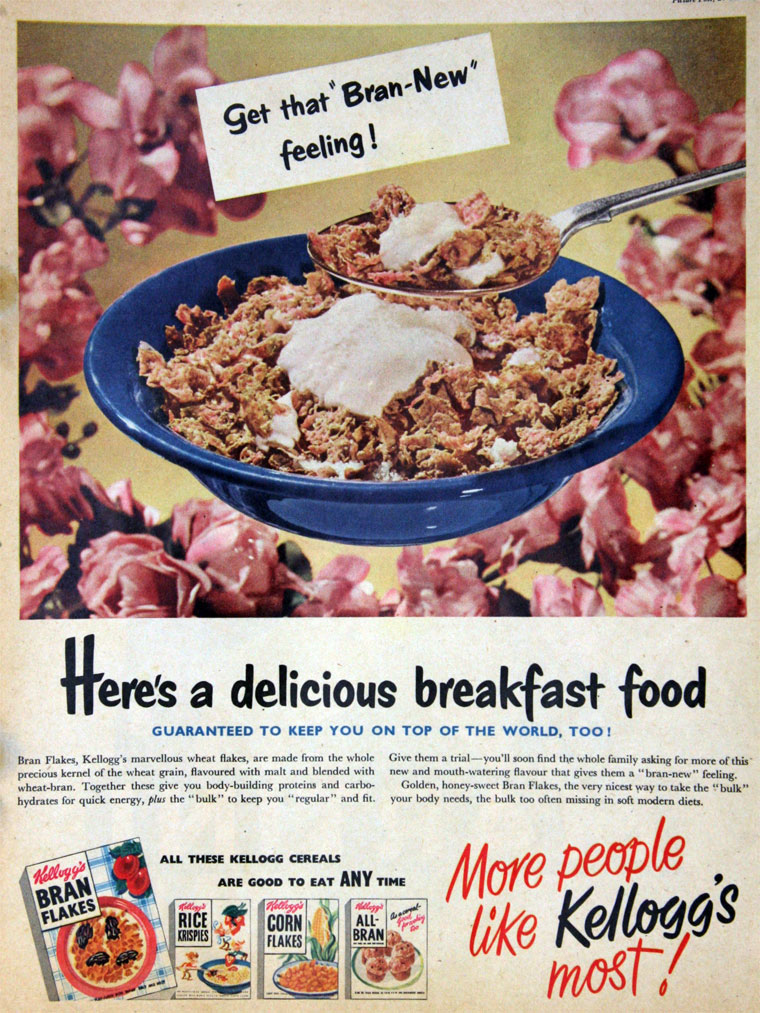 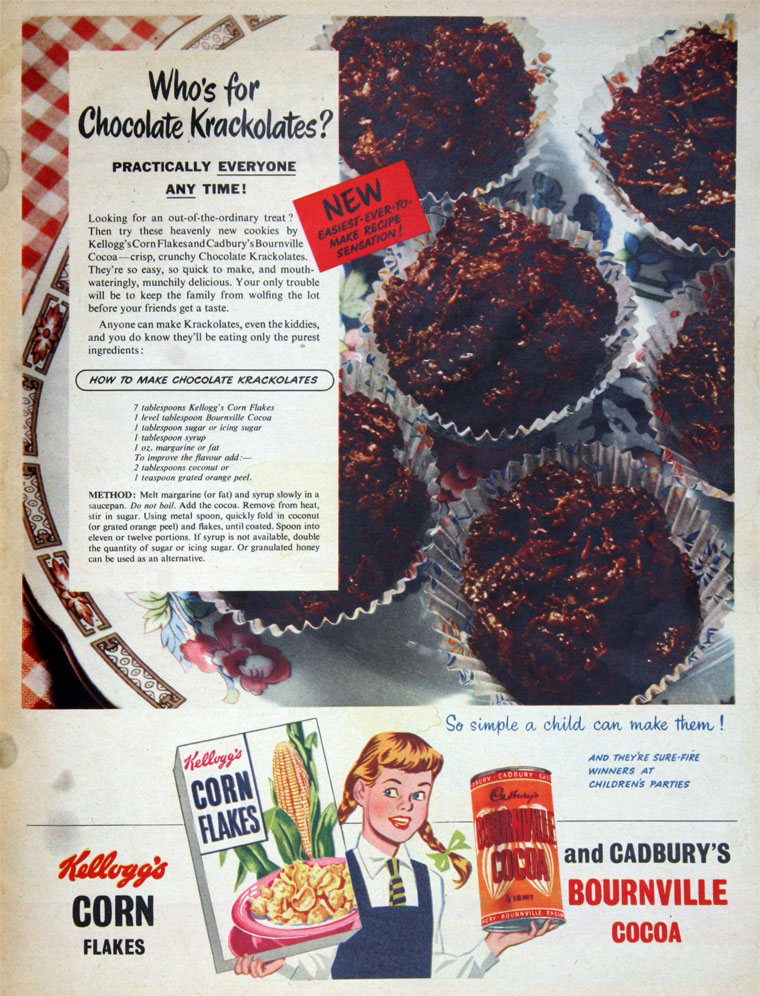 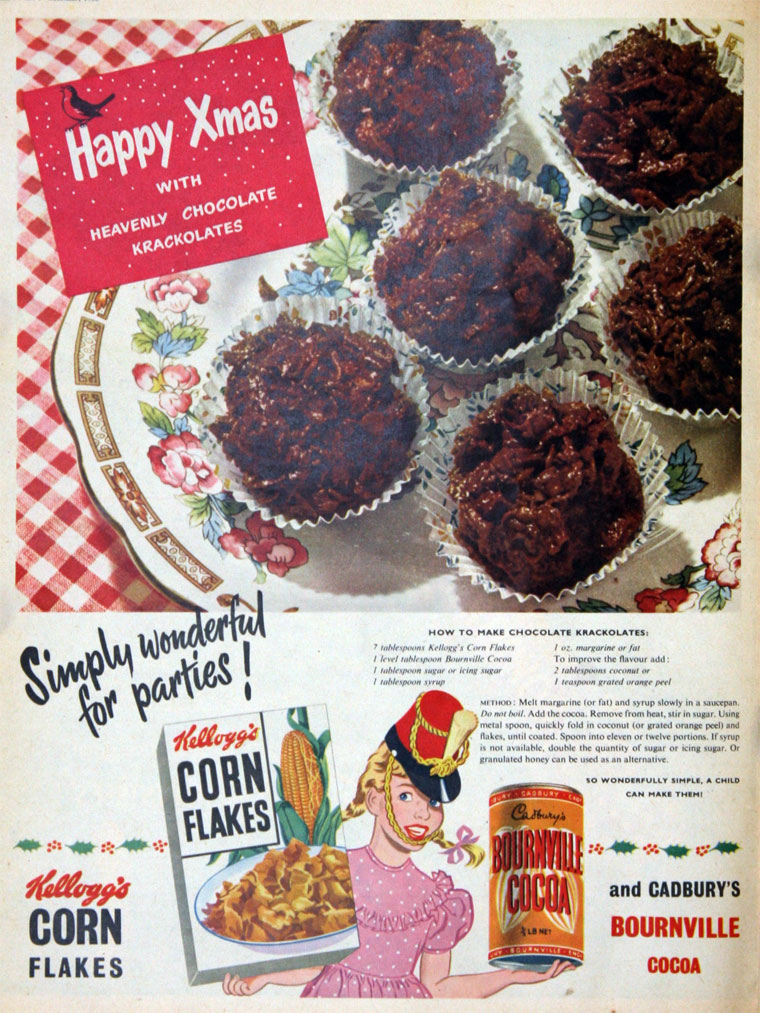 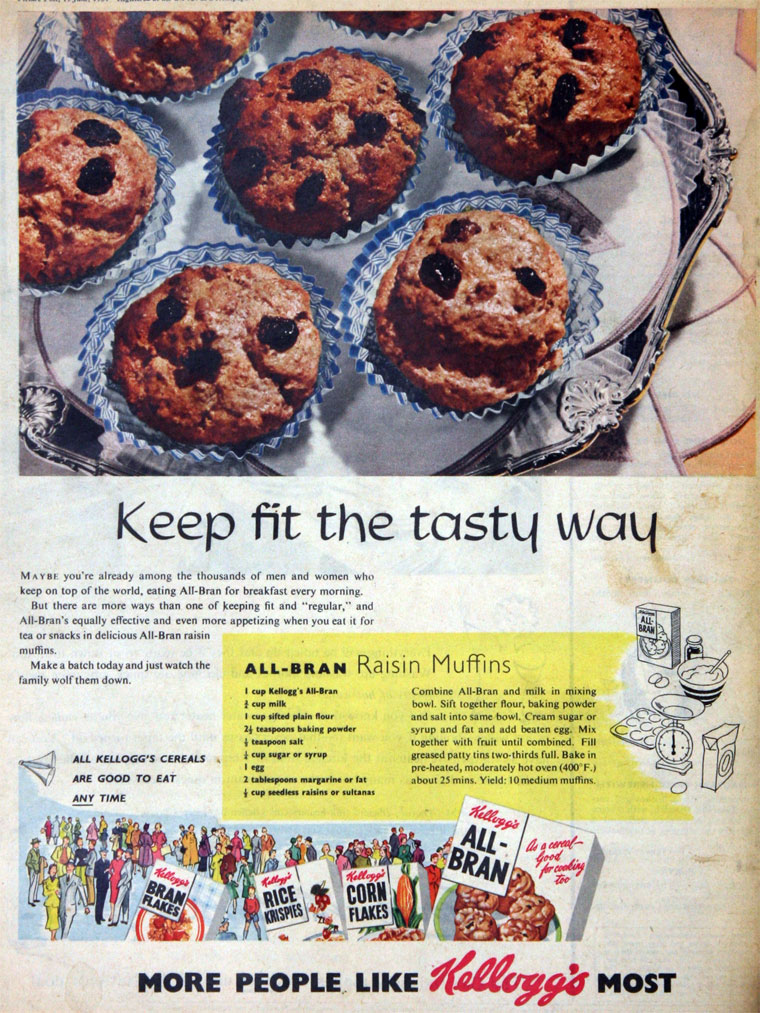 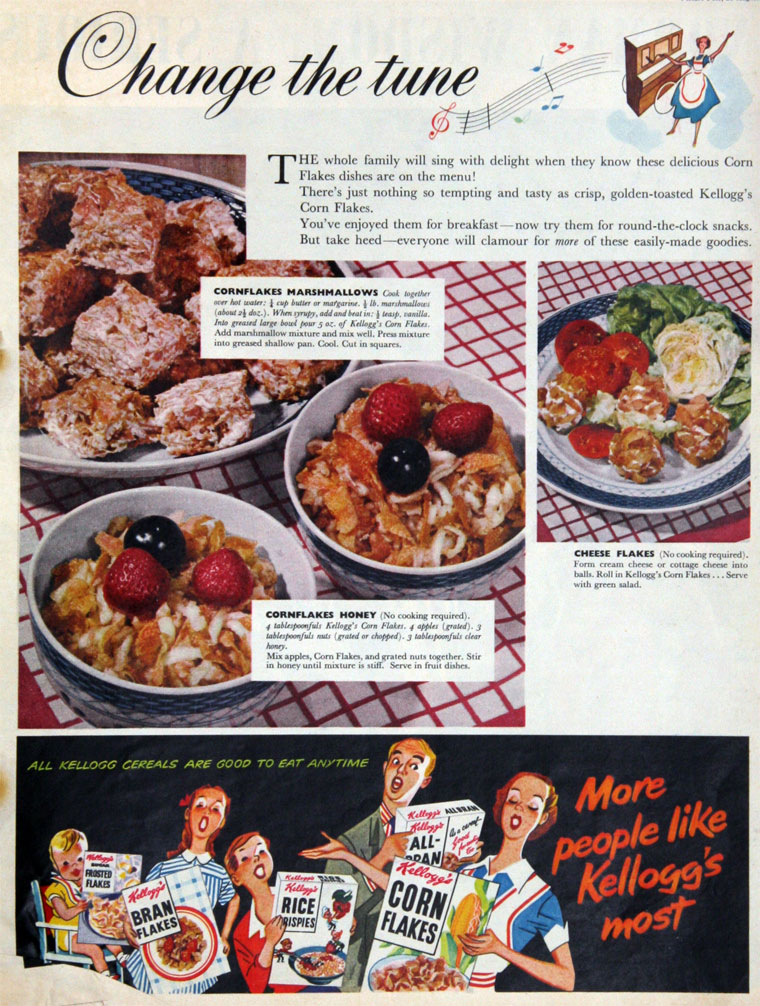 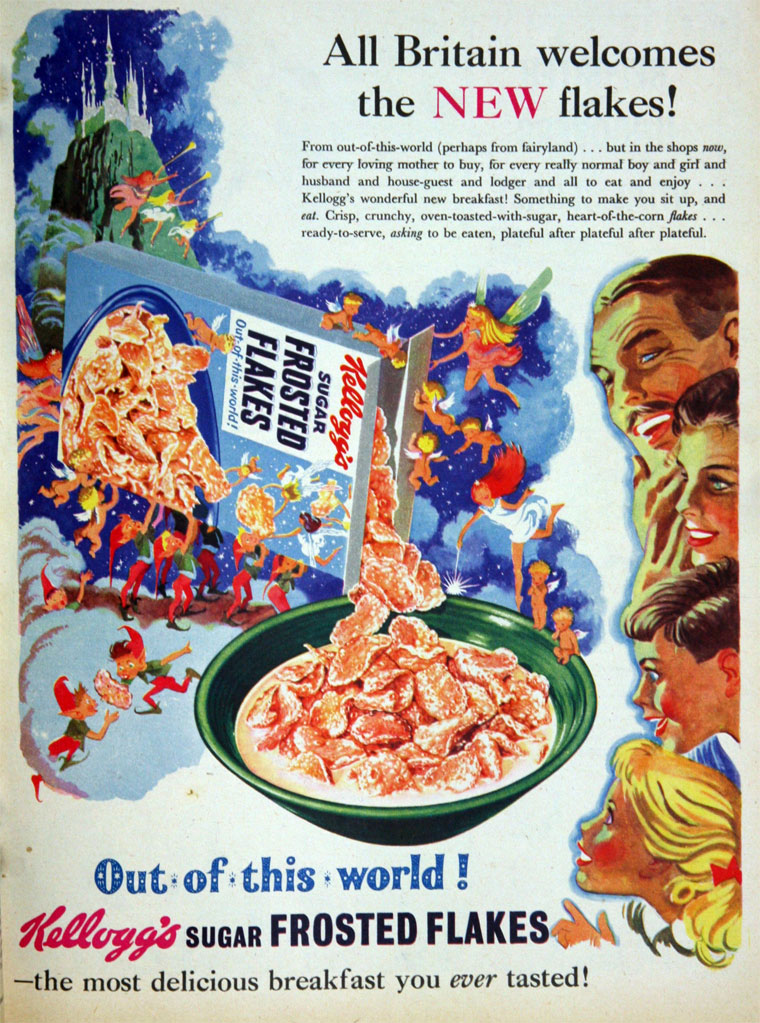 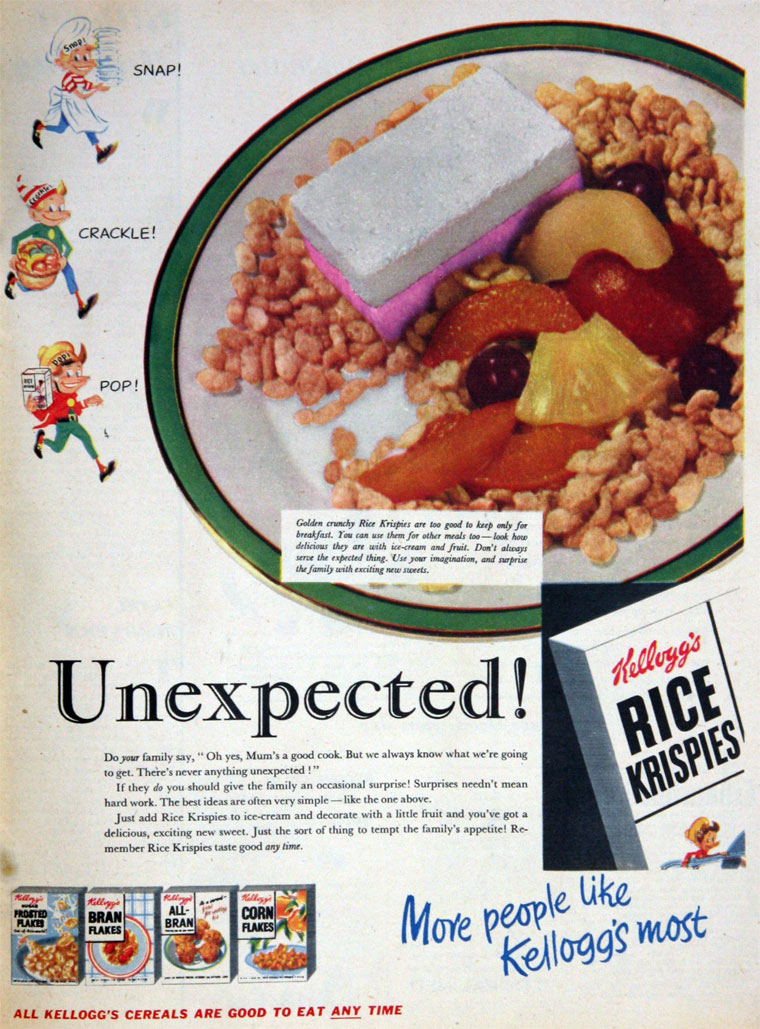 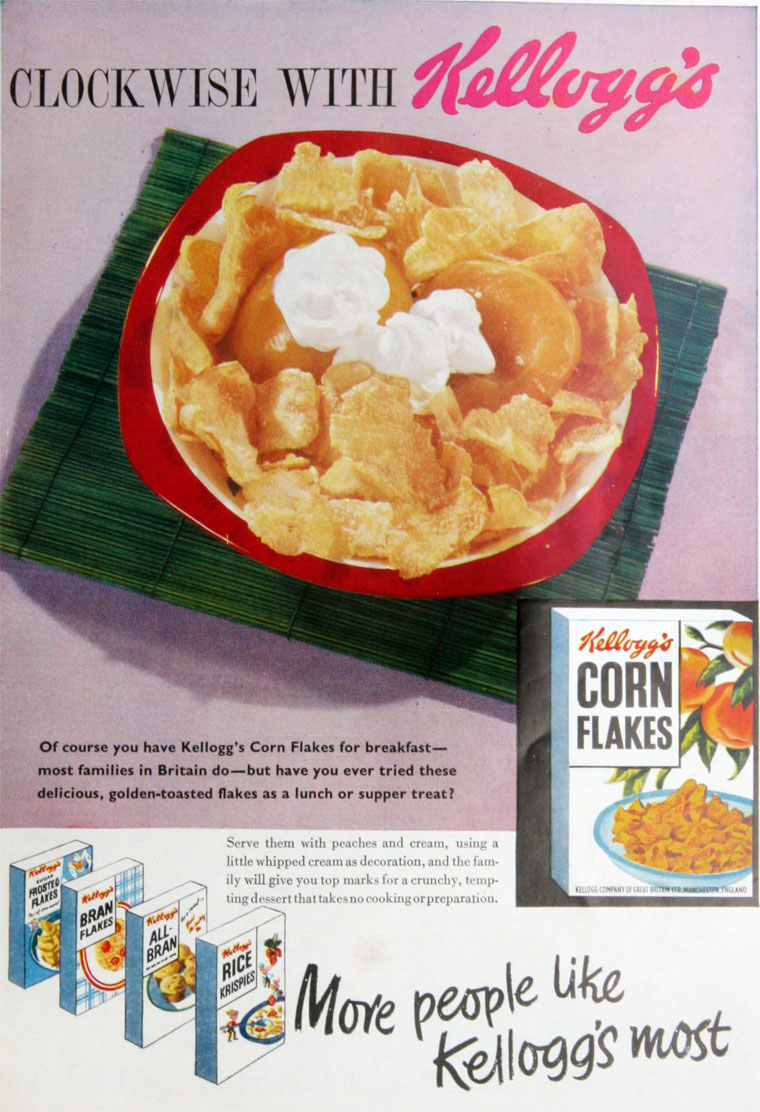 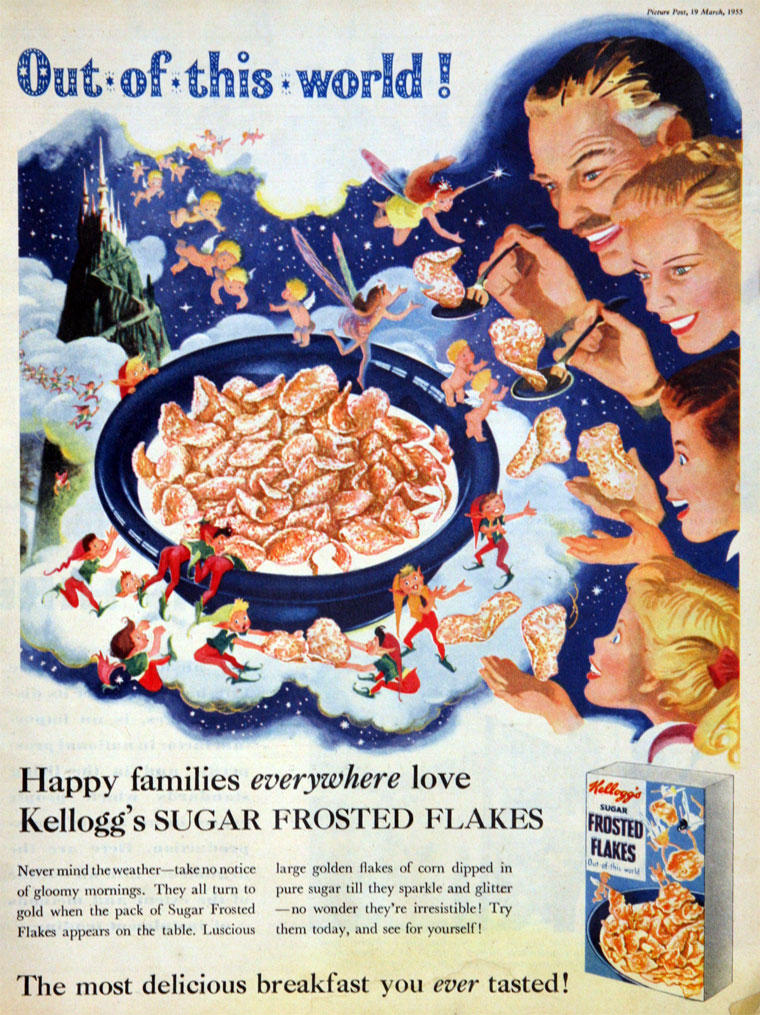 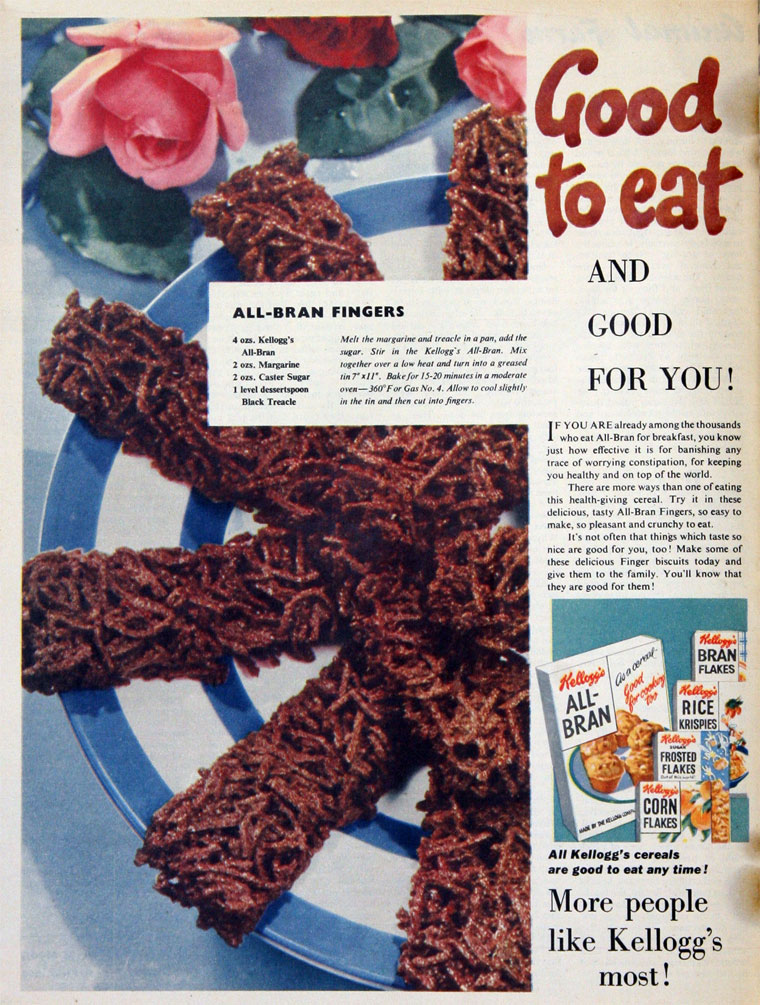 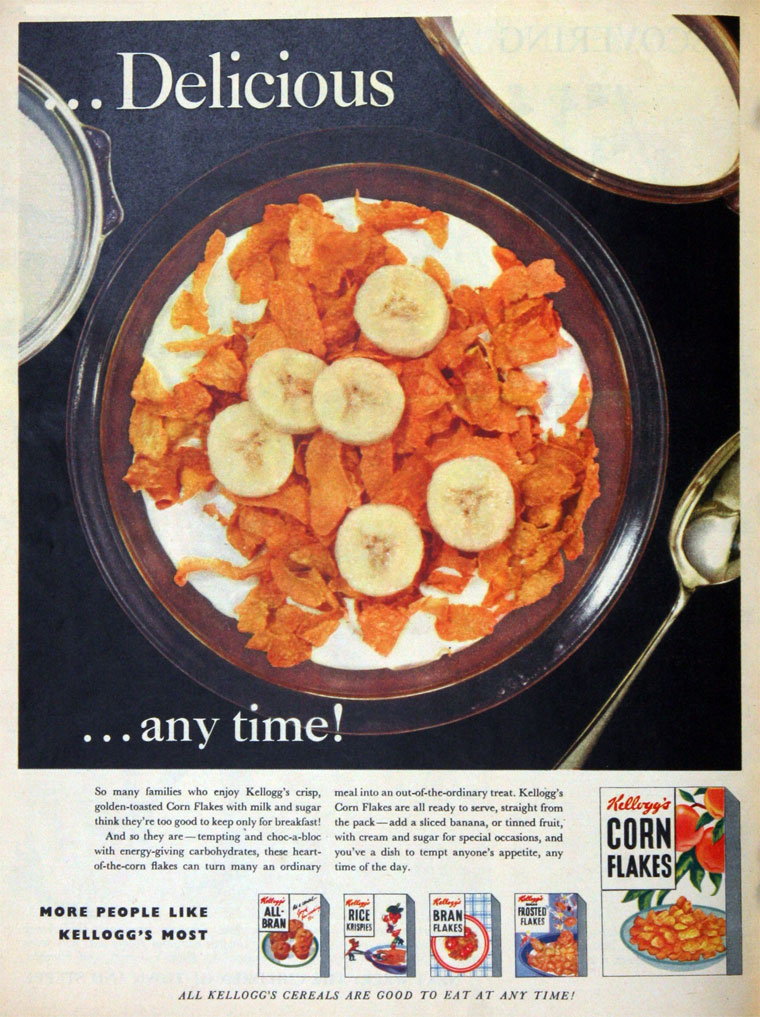 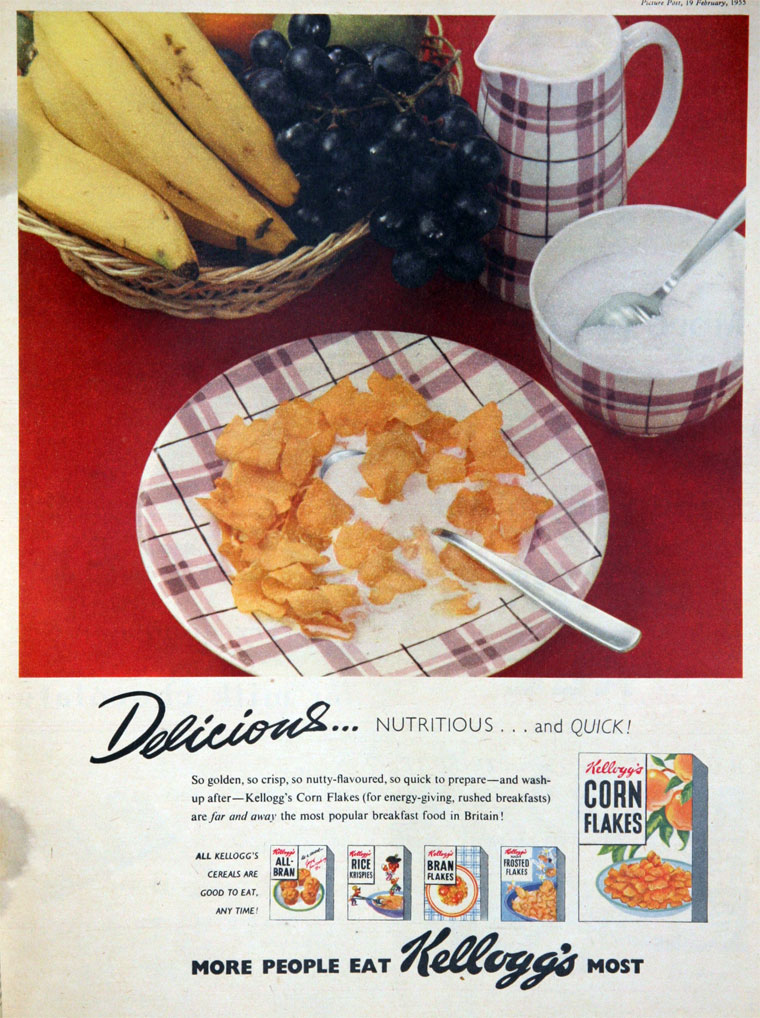 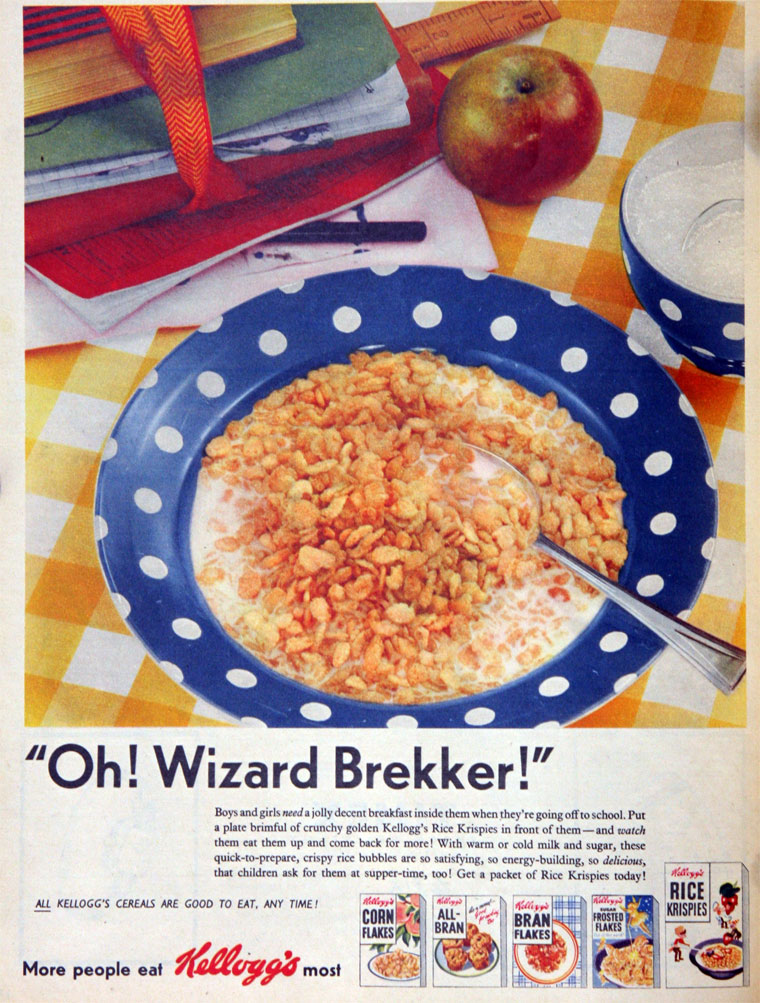 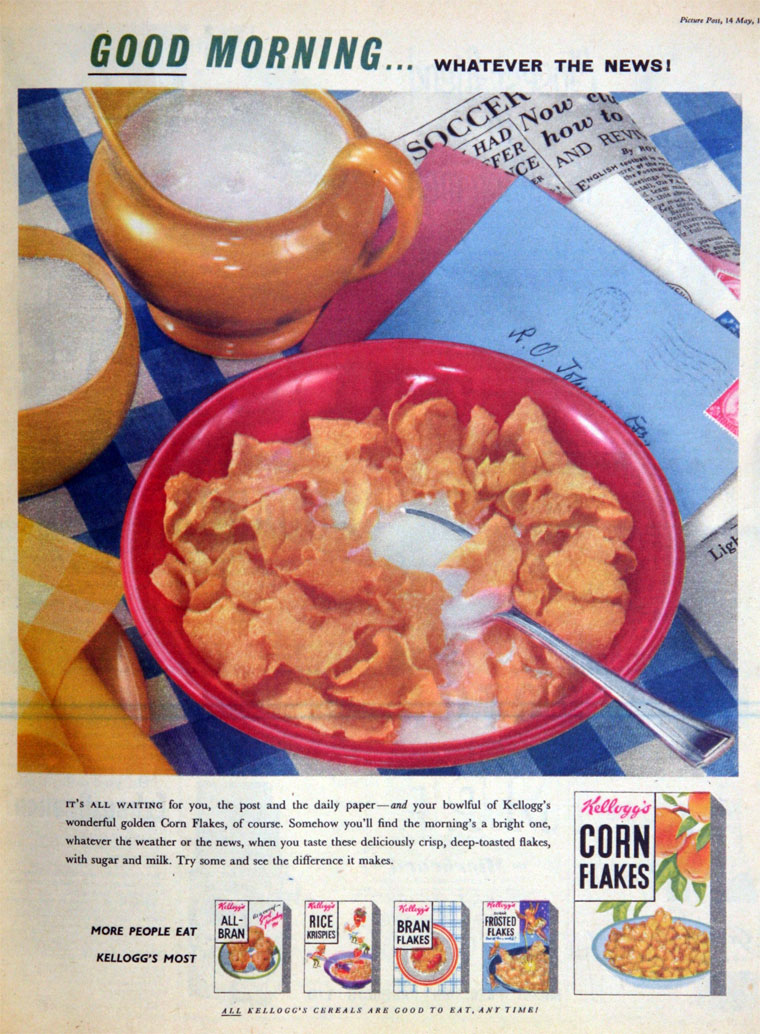 1870s Battle Creek Sanatorium, Michigan, USA, was set up by brothers Will Keith Kellogg and Dr John Harvey Kellogg. It was founded on a deep belief that ‘you are what you eat…’ and plenty of fresh air, exercise and a strict ban on caffeine, alcohol, tobacco and meat.

1876 While experimenting with different ways to cook and crush wheat to make it more palatable without losing its goodness, he inadvertently ran a batch of cooked wheat through the rollers. The result was Kellogg's Corn Flakes

Testing their new discovery on their patients confirmed that here indeed was the delicious, nutritious breakfast the brothers had been seeking.

When orders starting coming for the new flakes from former patients, they knew they were onto a good thing and set up a separate company to manufacture their cereal under the name Sanitas.

1898 Kellogg's Corn Flakes as we know them appeared.

1902 Will Keith Kellogg made the decision to leave the ‘San’ and set up full time in cereal production.

1906 He decided to risk a portion of his hard earned capital on his first advertising campaign, with spectacular results. One full-page advert in the Ladies’ Home Journal boosted sales to 2,900 cases per day.

By 1909 the small company in Battle Creek was producing and selling one million cases per year. Kellogg insisted on consistency and quality control and led a relentless campaign for improvement and innovation in his products. He printed healthy eating advice on his packs as well as recipe ideas and product information. Seems nothing out of the ordinary now, but in its day it was revolutionary.

1922 Kellogg’s Corn Flakes and All Bran were introduced in British, imported from the USA and later from Canada.

1923 Kellogg's hired the industry’s first dietitian to provide consumers with information about nutrition, develop recipes and spread the word about healthy eating - the start of a company tradition of providing the latest information about diet, nutrition and health that persists to this today.

1924 Opened an office in Holborn, London

By 1930, almost 60 years after his initial, accidental discovery that led to Kellogg's Corn Flakes, W. K. decided it was time to ‘put something back’ and set up the W. K. Kellogg Foundation. Dedicated to the principle of guidance and self-help, the foundation is now one of the world’s largest philanthropic institutions, funding projects in health, education, agriculture, leadership and youth worldwide.

WWI Because of rationing Kellogg’s food could only be sold in the Midlands, North of England and Scotland. Corn Flakes were temporarily replaced by wheat flakes made of British-grown crops.

By the 1950s, Kellogg's had introduced a new range of products to cater for the differing tastes within the family.

1978 A second UK factory was opened, in Wrexham; at the time, one of the most progressive and modern food production plants in the world.

2012 Kelloggs acquired Pringles from Proctor and Gamble, to become the second biggest savoury snacks company in the UK and the world.

Today, Kellogg’s produces more than 40 different cereals with plants in 19 countries and employing 26,000 people in its worldwide organisation.