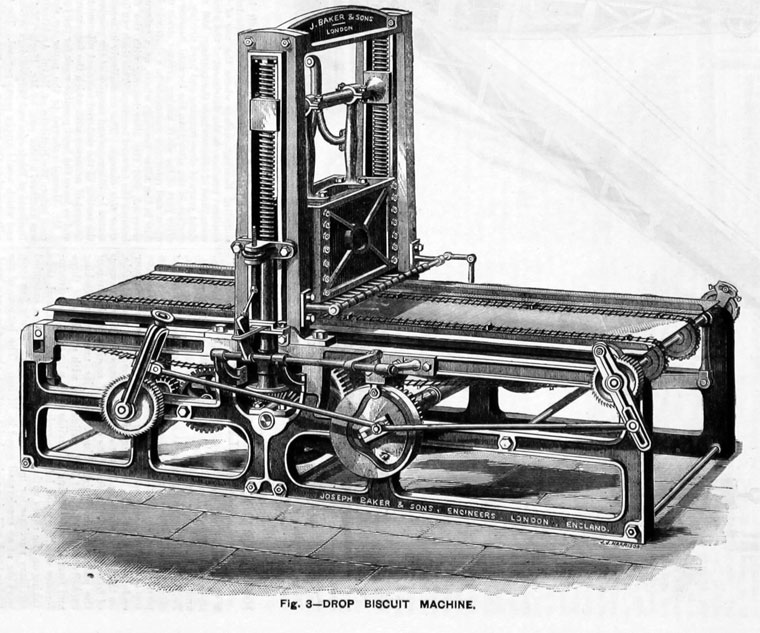 1823 Joseph Baker was born, son of Samuel Baker, in Canada

c.1870 Joseph and his son Joseph Allen Baker established a business in Canada selling books, maps and other products door-to-door.

Joseph invented a flour sifter for domestic use which he sold initially along with the other products; it was so successful that the business concentrated on selling the Baker flour sifter, which was patented in Canada in 1870.

1876 Joseph and J. Allen Baker visited England. J. Allen stayed behind when his father returned to Canada and set up a company to sell his father's products, with offices in London and Liverpool.

1878 The rest of the family moved from Canada to England. Another son, George, added new products to the business, especially powered large-scale sifting machines.

1889 May. Paris Exhibition. Biscuit making machines as used by Huntley and Palmers and Peek, Frean and Co. [1]

1892 Joseph Baker died; the company was then run by his son J. Allen Baker.

1890s Catalogue featured steam and oil engines but these seem not to have been manufactured by the company.

1902 The company was registered as a limited company on 2 July, to acquire the business of engineers, of the firm of the same name. [2]

c.1902 Agent for the Stevens-Duryea car, made in the USA

1914 Contract awarded by the War Office for the Baker Perkins Standard Army Bread Plant; Werner, Pfleiderer and Perkins, specialists in bread making machinery, received a sub-contract with the work divided between the two firms.

Took over the Coventry Ordnance Works but the staff were unable to work to the precision required and, after 2.5 years, the link with Coventry was ended.

1921 Experiments carried out at the Willesden factory of Joseph Baker and Sons showed that a certain combination of chemicals could enhance the action of yeast in bread. Production of the "bread improver" began at Willesden. A subsidiary company British Arkady Co was formed to exploit this development.