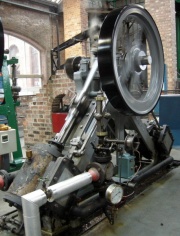 1890 Double-diagonal engine at Manchester's Museum of Science and Industry 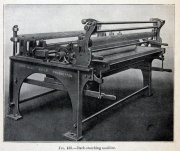 1890 Diagonal Engine. Exhibit at Manchester's Museum of Science and Industry

1914 Listed in index of Whitakers as Textile Machinery manufacturers. No further information given. [1]

John Wood died in 1936 having lived and worked here, building up his business in the town from 1881. He was buried in Ramsbottom cemetery. After he retired to live in St Annes his nephews John Wood Armstrong and Peter Armstrong had the business, still under the John Wood name.

The business was started by John WOOD in 1881 in premises on Kay Brow, later removing to Railway Street. He had decided to have his own foundry while he was working for William SHARPLES and Company. In 1888 he is listed as an engineer and iron founder residing at 83, Bolton Street, Ramsbottom. By 1911 his home was at 41, (or 43?), Bury New Road.

In 1896, at about the time that he became actively interested in photogravure printing machines, John WOOD bought the whole of the large building on Garden Street alongside the railway line. (About 1830-40, as Garden Mill, it had been used for weaving.) WOOD’s pattern shop, pattern store, engineers’ stores, a foundry and the stables were across the road, occupying another large site. The firm played its part in developing textile and paper printing and finishing machinery and its advances in the design of the simple machines first used in photogravure printing led to the production of high speed colour presses which were widely used in the printing and wallpaper trades (including one of the largest manufacturers of their time, Shand Kydd ). Their machines were used for printing large circulation magazines such as the Picture Post.

During World War I, WOOD’s pattern maker Leemin FLETCHER *, worked on the patterns for the first machine used for printing paper money in this country. This machine printed the first pound note, the old John Bradbury. A good proportion of food rationing cards used in World War I were printed on WOOD’s equipment and the firm supplied parts for the erection of the Mulberry Harbour which was built for the D Day landings of World War II.

When holidays were rather scarce workers had only Christmas Day, New Year’s Day, Easter and one week’s annual holiday in the summer. Christmas parties for all staff and workers were held in the canteen and apparently there was good food and free drink all night. Later the celebration was a dance and buffet at the Liberal Club. For a time on Shrove Tuesday the apprentices at the works loaded up with black grease bags and toured the town in search of other apprentices (joiners, plumbers, building trade workers etc) to smear and blacken. They then had the afternoon off. The practice carried on for a few years but was stopped as it was getting out of hand.

Mr Leemin FLETCHER started at WOOD’s in 1899 at the age of 13 as an apprentice in the pattern department and had been foreman of the department for 12 years when he retired in November 1954, aged 69, having completing 56 years. His retirement terminated a total of 156 years service to the firm by the Fletcher family. His father Thomas FLETCHER had joined the staff in 1882 (the year after the firm was founded) aged 22 as foreman turner, later having complete charge of the machine and fitting department and served 54 years. Leemin’s brother Tom FLETCHER (junior) started as an apprentice pattern maker and was at Garden Engineering Works for 24 years before moving to A V Roe’s on the outbreak of World War II. Another brother Arnold FLETCHER, who died in 1952 aged 49, served 22 years at Ramsbottom before taking up a post at Derby.

Mr John BARNES, foreman turner, also became a long-serving member of staff, retiring in 1955 after 51 years. Both men were honoured with presentations and farewell dinners at the Swan Hotel, Bolton. Miss Janet SPIERS [3]was a secretary for many years. In memory of John WOOD, this lady donated the clock at the Council Offices - near the telephone box. She also donated a cover for the St. Paul’s Church organ.

In the Ramsbottom Heritage Society’s Spring 1998 News Magazine, Fred HANSON wrote about his father Thomas Ashworth HANSON who left Holcombe Day School at 12 years old to become an apprentice at John WOOD’s Foundry. He became a fully-fledged engineer in 1911, working mostly as an outfitter.

Fred says: The apprenticeship cost £100 and took a full 7 years. He started at 5.30am and his first job was to take two three gallon cans to the pub, which opened at 6am, get them filled with beer at 1s a can, and have it in the Works by 6.15am. He went again at 10am and again at 2pm, six days a week.

John WOOD had died in 1936 having apparently lived in St Anne’s since before 1927. His nephews, brothers Johnny and Peter ARMSTRONG, ran the business after he retired. We are told that during World War II Wood’s worked on gun barrels and trepanning. In the obituary of Mr J W ARMSTRONG, it is mentioned that a brother and he (Johnny) had been the owners of John Wood, Engineers, Ltd until it had changed hands on his retirement about four years earlier. Great changes in the administration of the company had then taken place. During 1954 the company was taken over by a financier, Col. F Baden Powell WEIL of Maidenhead and Col C C L TOFIELD was appointed as managing director. This change in administration involved a complete reorganisation.

Wood’s Engineers (Ramsbottom) Ltd then took over J. WOOD (Engineers) in 1959. Machines were made mostly for the home market, but also for abroad eg Egypt, USA, Canada, South Africa, France and Holland. The main items produced around this time were printing machines for the newspaper industry – one customer was Heaton Mills (then opposite Heaton Park) and there were others. Also there was work for Sun Printers, Watford (photogravure printing machines and general engineering items).

All drawings were supplied from Wood’s drawing office and patterns from their pattern shop. (Fully qualified pattern makers still served a seven year apprenticeship.) The patterns were passed on to the foundry where the castings were cast (casting was usually twice a week) and then manufactured by the machine shop where equipment included lathes, drilling machines and planing machines. Fitters would then assemble the machines.

Contracts in 1964 included thirteen wallpaper printing machines for Imperial Chemical Industries (whose wallpaper was made at Hyde, Cheshire), photogravure machines for magazine printing at Watford and a duplex printing machine, claimed to be the largest in the world at 75’ long, 20’ wide and 26’ high. It was designed to print textile materials in eight colours on each side (duplex). In May that year the Managing Director, Mr Keith CHERRY, stated that the labour force totalled 120 and more workers were needed.. For about eighteen months they had been working three night’s overtime a week, Saturday mornings and each Sunday almost without a break. Other estimates suggest 130, including approximately thirty men in the foundry, seventy machine fitters, and thirty draughtsmen and staff and that at its peak there were probably as many as two hundred employees.

HINCHLIFFE’s provided transport for many of Wood’s deliveries. At one time, possibly in the mid 1950s, a HINCHLIFFE dropside lorry was driven to Blackpool about once a month to bring back a load of about eight tons of sand for the foundry. The lorry was parked up on the roadside opposite the holiday camp and the sand was shovelled from the dunes, except after windy weather which could make the job a lot easier as there was often plenty of sand on the road. (Geoff HINCHLIFFE remembers these trips from when he was a six or seven year old boy helping with his smaller shovel, and also enjoying tea and toast at a certain pub, now called The Trafalgar. The lorry driver was a regular caller there as he often drove the company coaches on the frequent Blackpool outings which broke the two and a half hour journey at the pub.) The following morning the sand was delivered to the foundry by being shovelled through an opening in the street-side wall.

Waste from the foundry was taken in WOOD’s horse-drawn cart to be tipped on the riverbank opposite the paper mill. (The site was also used as a dump for ash from the boilers of many of the mills.) Victor, a large white horse, was still used with a dray for transporting small local repair deliveries for Wood’s in 1958. A London firm, Hubert Jones (also based in Salford) owned the business when it closed. Their manager David UNSWORTH who lived at 10, Garden Street as a child (part of the row numbered 6 – 10, now demolished) remembered Victor. WOOD’s horses are also remembered as being beautifully turned out.