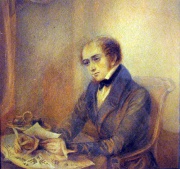 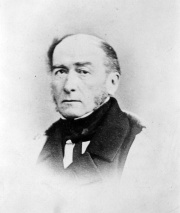 For his studies of tides he was awarded the Royal Medal in 1834.

1839 John William Lubbock, vice-chancellor of the University of London, became a member of the Institution of Civil Engineers.[1]

He received his education at Eton, and took his degree at Trinity College, Cambridge, in 1825; where his obtaining only the rank of first Senior 8ptime surprised all those who knew and could appreciate his mathematical attainments ; the truth, however, was that he turned his particular attention to the branches of astronomy in which he was afterwards distinguished, and having no special reason for seeking University honours, he was content to take what he could get on his own terms as to study.

Throughout his life he applied himself to the lunar theory and the subjects connected with it. Out of the higher departments of astronomy, perhaps his most remarkable work was his excellent book, on 'Probability,' which he contributed to the “Library of Useful Knowledge,” in conjunction with his friend Drinkwater (afterwards Drinkwater-Bethune.) This work was anonymous : a binder chose to letter it as “De Morgan on Probability,” and Mr. De Morgan, in a letter to the “Times,” stated that he could not in fifteen years, though using every opportunity, succeed in restoring the book to its true authors.

The early part of his life was devoted to the pursuit of science, particularly that of astronomy, in connection with which he investigated many questions respecting the action of the tides, the theory of the moon, and the perturbation of the planets, and the determination of the distance of a comet from the earth, and the elements of its orbit. He was by nature destined for a purely theoretical investigator, and science lost one of her most brilliant sons when the worldly affairs of the bank demanded the active co-operation of Mr. Lubbock. At the period of a great depression in the commercial world his talents were called into requisition, and he responded to the demands of his father and partners in a manner which conferred the highest honour upon his talents, his judgment, and his acquirements. When the time of trial was over, he returned to his more congenial pursuits, and occupied the position in the scientific world for which he was so eminently qualified. He was Treasurer to the Royal Society from 1830 to 1835, and again from 1838 to 1845. He was also for many years Vice-Chancellor of the University of London.

By the Royal Society he was awarded the Royal Medal in 1834 for his Paper 'On the Tides,' and in 1848 the Astronomical Society gave him a testimonial for his 'Researches on the Theory of Perturbation.'

His Bakerian Lecture 'On the Tides at the Port of London,' delivered in 1836, holds a very high place in that class of investigations. In 1848 he joined the Geological Society, where, during the brilliant portion of the career of that Society, he, with the other shining lights of those days, maintained the interest of the evening discussions. At the same time he found leisure to contribute papers on interesting or on abstruse subjects to most of the principal scientific societies of eminence in the kingdom.

In addition to these communications he published several important works on astronomical and mathematical subjects ; such as an 'Elementary Treatise on the Computation of Eclipses and Occultations,' 'Remarks on the Classification of the different branches of Human Knowledge,' 'An Elementary Treatise on the Tides,' 'On the Heat of Vapour,' and 'On Astronomical Refractions,' with several other minor works. His communication to the Geological Society in 1848, “On Change of Climate, resulting from a Change in the Earth’s Axis of Rotation,” is deserving of special study.

He was elected an Honorary Member of the Institution of Civil Engineers March 5th, 1833, and he contributed to the Society, 'A Theoretical Calculation of the Fuel saved by working Steam expansively.'

Sir John Lubbock united with his scientific attainments a good knowledge of business, and to this he added a character which obtained for him, in full measure, the respect of the world, and the regard of his friends. Social rank, wealth, commercial position, and Scientific reputation did not give him the least disposition to overbear those with whom he came in contact. Many men, with union of several rights to presumption - if any rights there beare prevented from claiming their rights by having nothing for which to fight. But Sir John Lubbock - especially when young - had very decided opinions, and, in a scientific discussion, would not unfrequently stand alone. But he had a genuine modesty of character which kept him far within what was due to others. He was keenly sensible to difference of opinion; but a scientific comrade used to say of him, that it made him angry with himself, and not with his opponents.

It cannot be affirmed that. a man who dies in his sixty-third year has shortened his life by too wide a range of occupation ; never- theless, it may be feared that the double life which Sir John Lubbock led for some time produced that general debility under which he laboured for years before his death. At all events it may be said of him, as of many other men of energy, that had they tempered that energy, they would have lasted longer; but would they have been as useful?