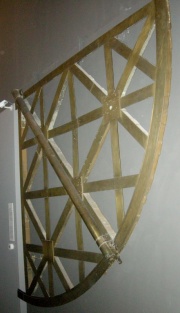 1789 Mural quadrant at Milan Museum of Science and Technology

Detail of 1789 mural quadrant. The bevelled plate is a vernier scale. Similar details may be seen in the photos of a mural quadrant in Oxford made by John Bird 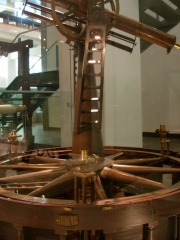 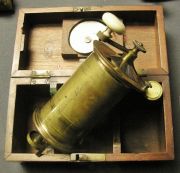 Jesse Ramsden (1735–1800) FRSE was an astronomical and scientific instrument maker.

After serving his apprenticeship with a cloth-worker in Halifax, he went in 1755 to London, where in 1758 he was apprenticed to a mathematical instrument maker.

About four years afterwards he started business on his own account and secured a good reputation with his products.

The quality of design and construction of Ramsden's circular dividing engines was celebrated in the world of science. This led to his speciality in dividing circles, which began to supersede the quadrants in observatories towards the end of the 18th century. His most celebrated work was a 5-feet vertical circle, which was finished in 1789 and was used by Giuseppe Piazzi at Palermo Observatory in constructing his catalogue of stars. See here[1] for a description of the Ramsden circle at Palermo and its restoration.

He was the first to carry out in practice a method of reading off angles (first suggested in 1768 by the Duke of Chaulnes) by measuring the distance of the index from the nearest division line by means of a micrometer screw which moves one or two fine threads placed in the focus of a microscope.

Ramsden's transit instruments were the first which were illuminated through the hollow axis; the idea was suggested to him by Prof. Henry Ussher in Dublin. He published a Description of an Engine for dividing Mathematical Instruments in 1777.

Ramsden is also responsible for the achromatic eyepiece named after him, and also worked on new designs of electrostatic generators.

1786 He was elected to the Royal Society

1791 He completed the Shuckburgh telescope, an equatorial mounted refractor telescope.

In about 1785, Ramsden provided a new large theodolite (see photo) for General William Roy of the Royal Engineers, which was used for a new survey of the distance between Greenwich, London and Paris. This work provided the basis for the subsequent Ordnance Survey of the counties of Britain. For his part with Roy in this work he received the Copley Medal in 1795.

Ramsden made important advances in machines for dividing circular and linear scales for scientific instruments. See Jesse Ramsden: Circular Dividing Engines. He described their design and construction in a paper published in 1777. This included descriptions and illustrations of the two lathes which he made to cut the 'endless screws' (worms) whose accuracy was critical to the success of the machines. Drawings of the lathes are reproduced above. See Ramsden's description, augmented by a commentary produced by Bill Morris, available online here. See also background here.

The lathe for the circular dividing engine's screw used a leadscrew to traverse a toolholder sliding on a triangular bar. The leadscrew had a pitch error of 1%, which Ramsden corrected on the workpiece by means of change wheels of 198 and 200 teeth (with an idler gear between).

Greater precision was required for the screw for his linear dividing engine, and Ramsden used a different method. Influenced by the design of his circular dividing engine, it had a large wheel driven by a worm, and the worm shaft also rotated the workpiece using bevel reduction gears. Again, the toolholder was guided along a triangular bar. It was traversed by being pulled along by a thin steel band attached to the accurately-machined hub of the wheel. The tool slide was marked with two dots precisely 5 inches apart. A microscope with a fine cross wire was used to view the dots as the slide was traversed below it. It was required to obtain the required 0.05 inch pitch of the screw with exactly 600 turns of the worm shaft. The diameter of the hub for the steel band was machined down by trial until the 600 turn criterion was exactly met.[3]