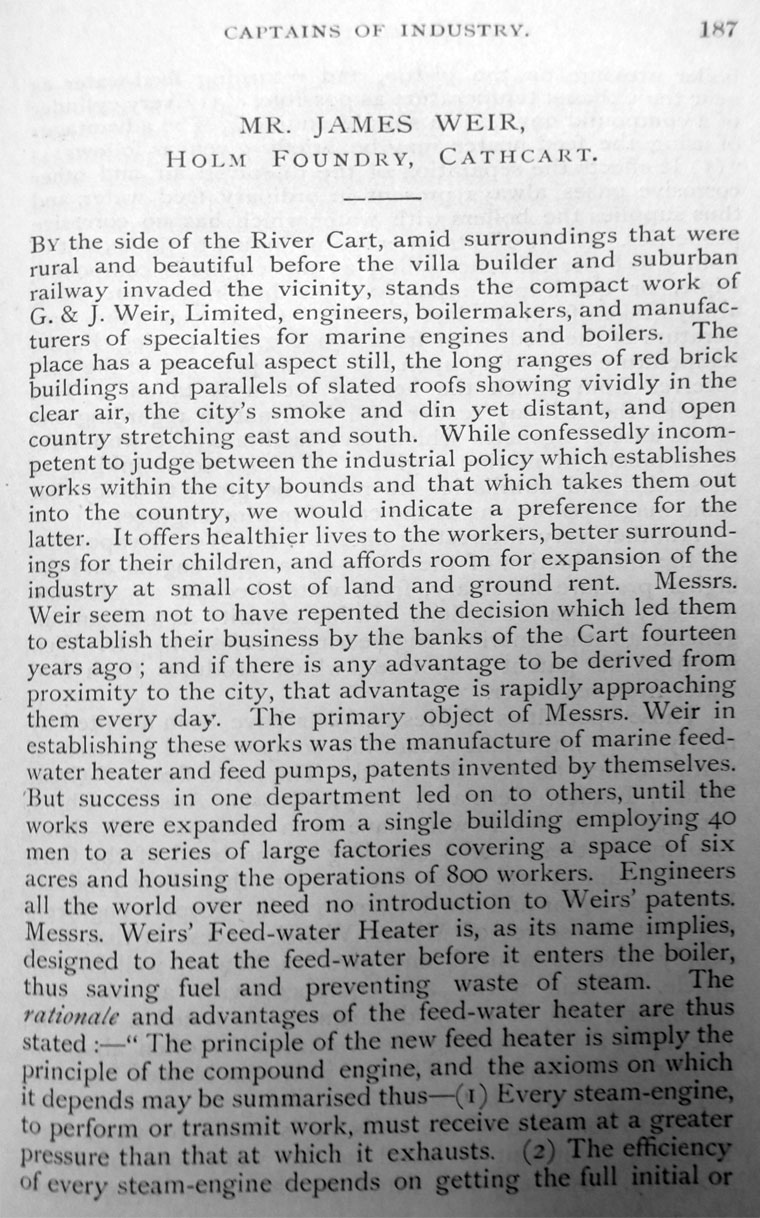 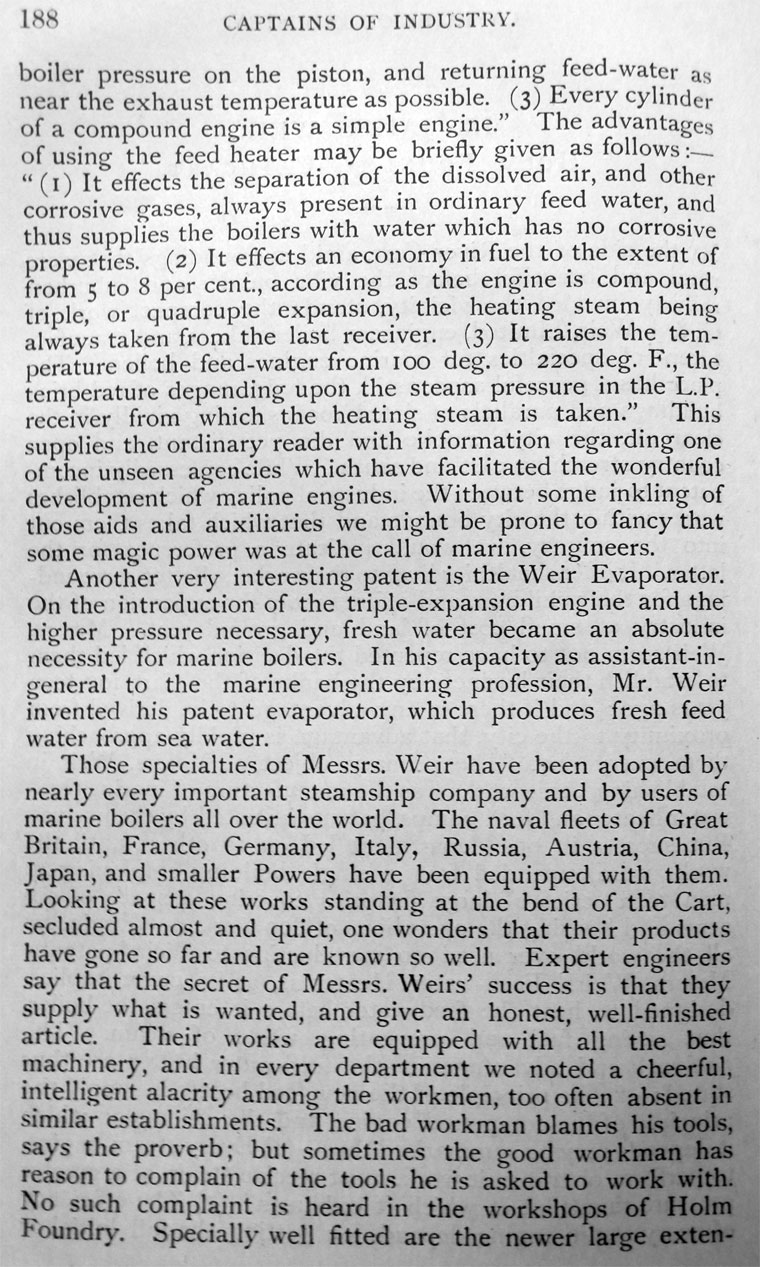 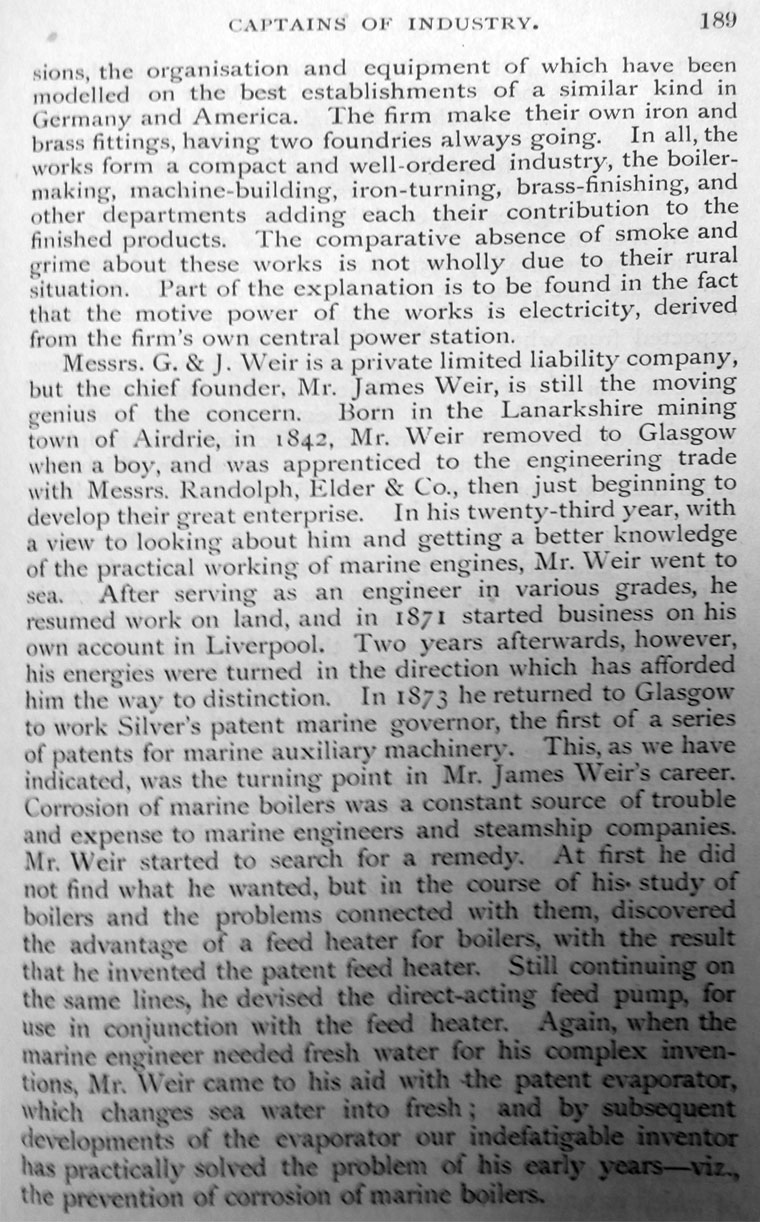 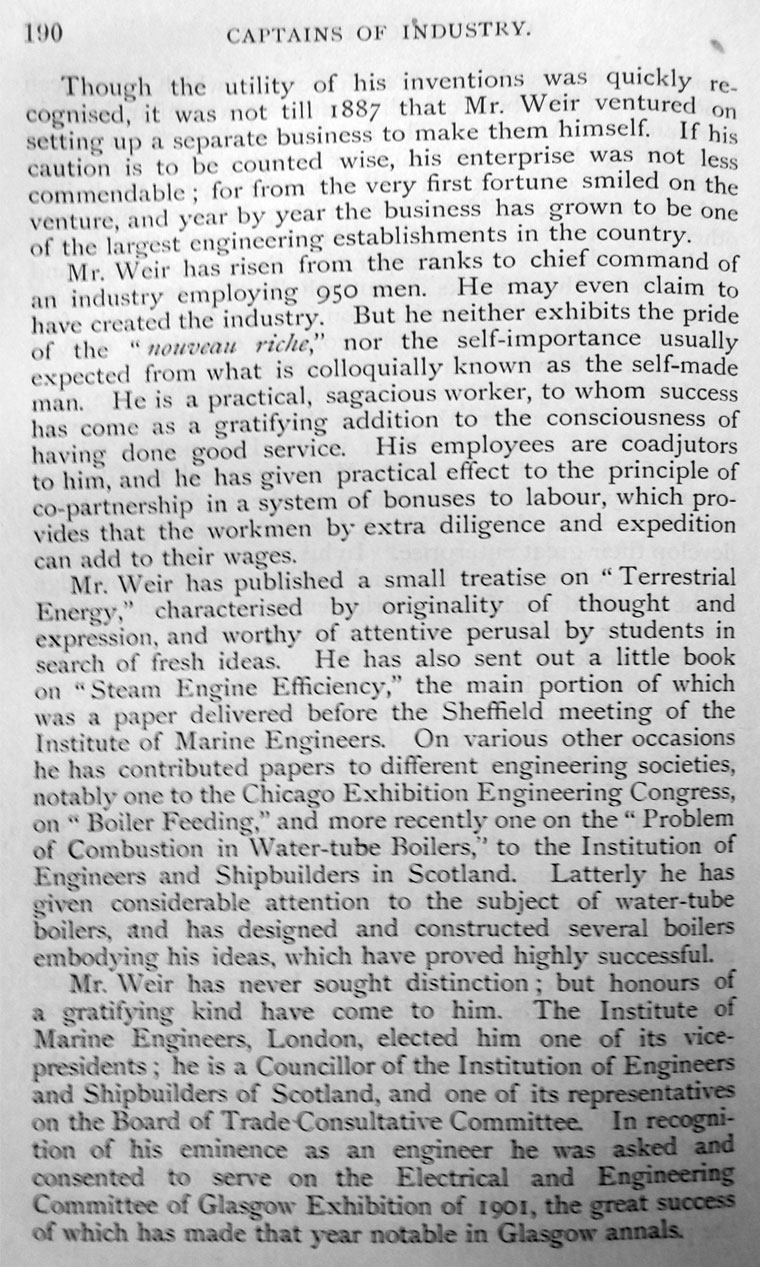 Note: This is a sub-section of James Weir

By the side of the River Cart, amid surroundings that were rural and beautiful before the villa builder and suburban railway invaded the vicinity, stands the compact work of G. & J. Weir, Limited, engineers, boilermakers, and manufacturers of specialities for marine engines and boilers. The place has a peaceful aspect still, the long ranges of red brick buildings and parallels of slated roofs showing vividly in the clear air, the city's smoke and din yet distant, and open country stretching east and south. While confessedly incompetent to judge between the industrial policy which establishes works within the city bounds and that which takes them out into the country, we would indicate a preference for the latter. It offers healthier lives to the workers, better surroundings for their children, and affords room for expansion of the industry at small cost of land and ground rent.

Messrs. Weir seem not to have repented the decision which led them to establish their business by the banks of the Cart fourteen years ago; and if there is any advantage to be derived from proximity to the city, that advantage is rapidly approaching them every day. The primary object of Messrs. Weir in establishing these works was the manufacture of marine feed-water heater and feed pumps, patents invented by themselves. But success in one department led on to others, until the works were expanded from a single building employing 40 men to a series of large factories covering a space of six acres and housing the operations of 800 workers.

Engineers all the world over need no introduction to Weirs' patents. Messrs. Weirs' Feed-water Heater is, as its name implies, designed to heat the feed-water before it enters the boiler, thus saving fuel and preventing waste of steam.

The rationale and advantages of the feed-water heater are thus stated:— "The principle of the new feed heater is simply the principle of the compound engine, and the axioms on which it depends may be summarised thus— (1) Every steam-engine, t() perform or transmit work, must receive steam at a greater pressure than that at which it exhausts. (2) The efficiency of every steam-engine depends on getting the full initial or boiler pressure on the piston, and returning feed-water as near the exhaust temperature as possible. (3) Every cylinder of a compound engine is a simple engine."

The advantages of using the feed heater may be briefly given as follows:— (1) It effects the separation of the dissolved air, and other corrosive gases, always present in ordinary feed water, and thus supplies the boilers with water which has no corrosive properties. (2) It effects an economy in fuel to the extent of from 5 to 8 per cent., according as the engine is compound, triple, or quadruple expansion, the heating steam being always taken from the last receiver. (3) It raises the temperature of the feed-water from 100 deg. to 220 deg. F., the temperature depending upon the steam pressure in the L.P. receiver from which the heating steam is taken.

This supplies the ordinary reader with information regarding one of the unseen agencies which have facilitated the wonderful development of marine engines. Without some inkling of those aids and auxiliaries we might be prone to fancy that some magic power was at the call of marine engineers.

Another very interesting patent is the Weir Evaporator. On the introduction of the triple-expansion engine and the higher pressure necessary, fresh water became an absolute necessity for marine boilers. In his capacity as assistant-in general to the marine engineering profession, Mr. Weir invented his patent evaporator, which produces fresh feed water from sea water.

Those specialities of Messrs. Weir have been adopted by nearly every important steamship company and by users of marine boilers all over the world. The naval fleets of Great Britain, France, Germany, Italy, Russia, Austria, China, Japan, and smaller Powers have been equipped with them. Looking at these works standing at the bend of the Cart, secluded almost and quiet, one wonders that their products have gone so far and are known so well. Expert engineers say that the secret of Messrs. Weirs' success is that they supply what is wanted, and give an honest, well-finished article. Their works are equipped with all the best machinery, and in every department we noted a cheerful, intelligent alacrity among the workmen, too often absent in similar establishments. The bad workman blames his tools, says the proverb; but sometimes the good workman has reason to complain of the tools he is asked to work with. No such complaint is heard in the workshops of Holm Foundry.

Specially well fitted are the newer large extensions, the organisation and equipment of which have been modelled on the best establishments of a similar kind in Germany and America. The firm make their own iron and brass fittings, having two foundries always going. In all, the works form a compact and well-ordered industry, the boiler- making, machine-building, iron-turning, brass-finishing, and other departments adding each their contribution to the finished products. The comparative absence of smoke and grime about these works is not wholly due to their rural situation. Part of the explanation is to be found in the fact that the motive power of the works is electricity, derived from the firm's own central power station.

Messrs. G. & J. Weir is a private limited liability company, but the chief founder. Mr. James Weir, is still the moving genius of the concern. Born in the Lanarkshire mining town of Airdrie, in 1842, Mr. Weir removed to Glasgow when a boy, and was apprenticed to the engineering trade with Messrs. Randolph, Elder & Co., then just beginning to develop their great enterprise.

In his twenty-third year, with a view to looking about him and getting a better knowledge of the practical working of marine engines, Mr. Weir went to sea. After serving as an engineer in various grades, he resumed work on land, and in 1871 started business on his own account in Liverpool.

Two years afterwards, however, his energies were turned in the direction which has afforded him the way to distinction. In 1873 he returned to Glasgow to work Silver's patent marine governor, the first of a series of patents for marine auxiliary machinery. This, as we have indicated, was the turning point in Mr. James Weir's career. Corrosion of marine boilers was a constant source of trouble and expense to marine engineers and steamship companies. Mr. Weir started to search for a remedy. At first he did not find what he wanted, but in the course of his study of hollers and the problems connected with them, discovered the advantage of a feed heater for boilers, with the result that he invented the patent feed heater.

Still continuing on the same lines, he devised the direct-acting feed pump, for use in conjunction with the feed heater. Again, when the marine engineer needed fresh water for his complex inventions, Mr. Weir came to his aid with the patent evaporator, which changes sea water into fresh; and by subsequent developments of the evaporator our indefatigable inventor has practically solved the problem of his early years—viz, the prevention of corrosion of 11larilIC

Though the utility of his inventions was quickly reognised, it was not till 1887 that Mr. Weir ventured on setting up it separate business to make them himself. If his caution is to be counted wise, his enterprise was not less commendable; for from the very first fortune smiled on the venture, and year by year the business has grown to be one of the largest engineering establishments in the country.

Mr. Weir has risen from the ranks to chief command of an industry employing, 950 men. He may even claim to have created the industry. But he neither exhibits the pride of the nouveau riche, nor the self-importance usually expected from what is colloquially known as the self-made man. He is a practical, sagacious worker, to whom success has come as a gratifying addition to the consciousness of having done good service. His employees are coadjutors to him, and he has given practical effect to the principle of co-partnership in a system of bonuses to labour, which provides that the workmen by extra diligence and expedition can all to their wages.

Mr. Weir has published a small treatise on "Terrestrial Energy" characterised by originality of thought and expression, and worthy of attentive perusal by students in search of fresh ideas. He has also sent out a little book on "Steam Engine Efficiency," the main portion of which was a paper delivered before the Sheffield meeting of the Institute of Marine Engineers. On various other occasions he has contributed papers to different engineering societies, notably one to the Chicago Exhibition Engineering Congress, on "Boiler Feeding," and more recently one on the "Problem of Combustion in Water-tube Boilers," to the Institution of Engineers and Shipbuilders in Scotland. Latterly he has given considerable attention to the subject of water-tube boilers, and has designed and constructed several boilers embodying his ideas, which have proved highly successful.

Mr. Weir has never sought distinction but honours of a gratifying kind have come to him. The Institute of Marine Engineers, London, elected him one of its vice- presidents he is a Councillor of the Institution of Engineers and Shipbuilders of Scotland, and one of its representatives on the Board of Trade consultative Committee. In recognition of his eminence as an engineer he was asked and consented to serve on the Electrical and Engineering Committee of Glasgow Exhibition of 1901, the great success of which has made that year notable in Glasgow annals.