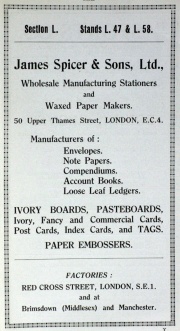 1847 Albert Spicer was born on 16 March at Clapham, Surrey, the second of four sons and sixth of ten children of James Spicer (1807–1888), a wholesale stationer of Woodford Green, Essex, and his wife, Louisa. He was educated at Mill Hill School and was then sent to Heidelberg where he learned to speak German fluently.

1865 Albert Spicer became the dynamic figure in James Spicer and Sons. With just eight employees the firm exploited new markets for printing and writing-paper by acting as an intermediary between paper manufacturers on one hand and retailers and consumer organizations on the other. The company developed a regional branch house system and acted quickly when new markets, such as school boards or county councils, appeared. Foreign markets, mostly in the British empire, were actively pursued, with Albert himself making many overseas trips.

Albert and his brother Evan (1849–1937) strengthened their competitive position by increasing the capital investment in their London facilities and rebuilding the Upper Thames Street premises.

1886 They acquired an envelope factory in Southwark.

1910 The partnership was converted into a private company, James Spicer and Sons Ltd, with an authorized capital of £450,000.

1913 It continued to build up its British and empire distribution network so that it had warehouses in London, Birmingham, Manchester, Leeds, Glasgow, Bristol, Melbourne, and Durban, and offices in Belfast, Liverpool, Edinburgh, Sydney, Brisbane, Adelaide, Perth, Wellington (New Zealand), Cape Town, and Paris.

Post-WWI. The slump after the First World War increased the pressures on specialist wholesalers and dealers. James Spicer and Sons protected their position by reuniting with their cousins.

1922 The two Spicer firms merged with the formation of Spicers Ltd with an authorized and issued capital of £1.15 million. It owned Eynsford Mills in Kent and the Sawston Mills, Cambridgeshire; two factories in Southwark; and a new factory at Brimsdown, Middlesex.

1923 Albert Spicer remained chairman of the new company for one year before retiring from business in 1923.