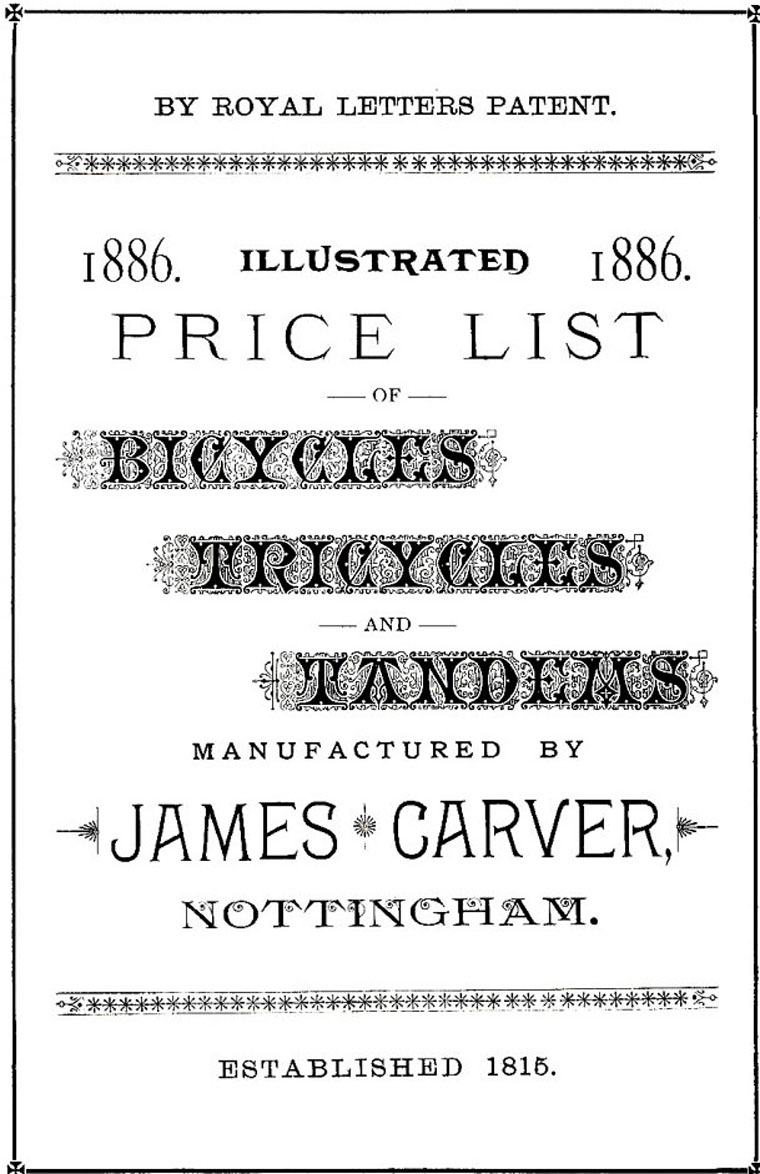 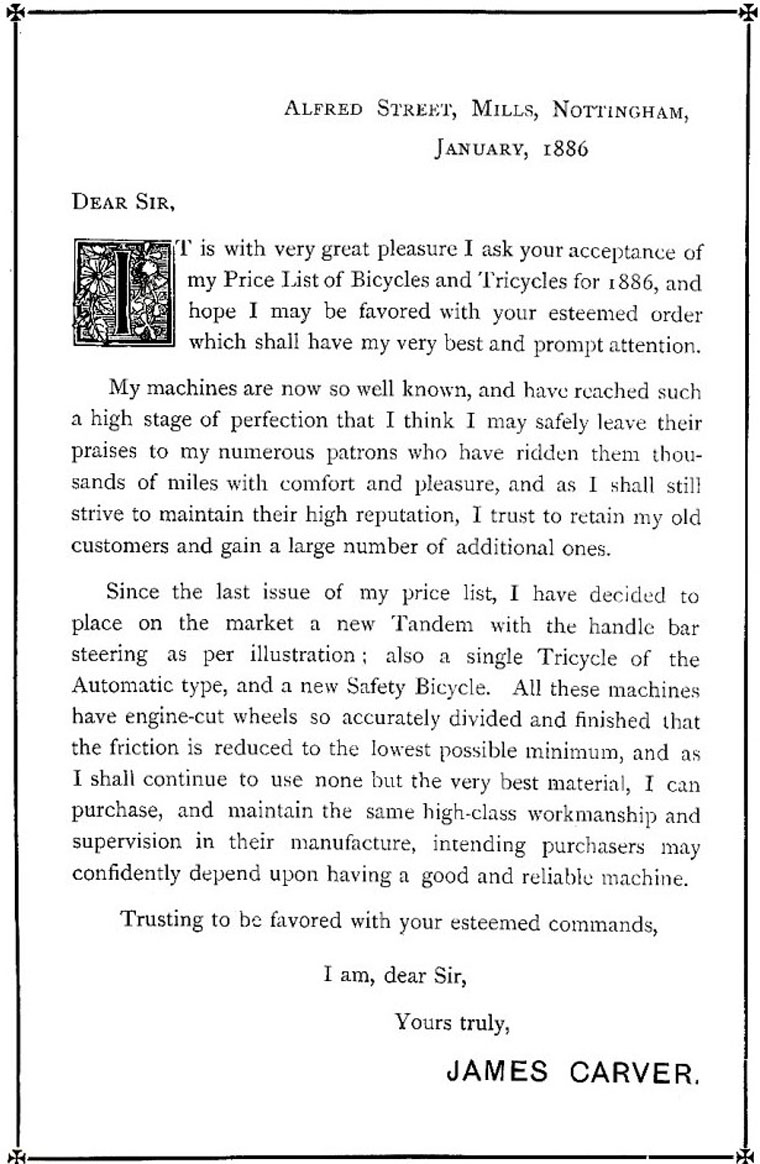 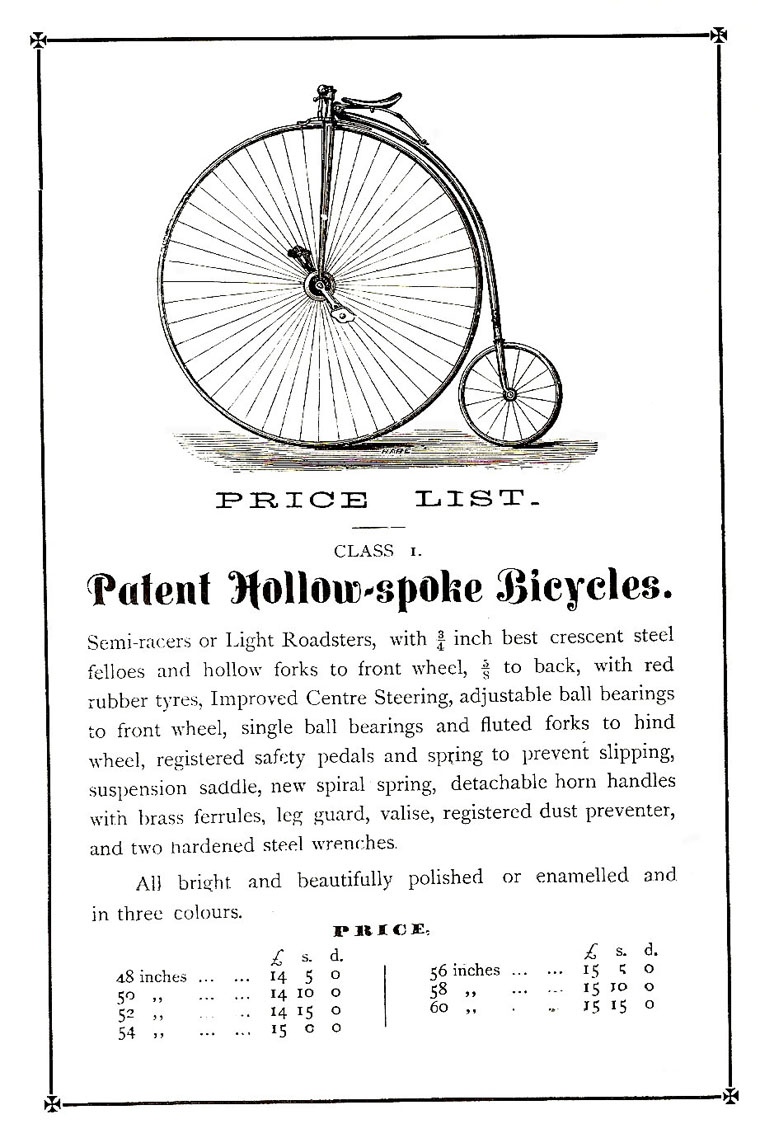 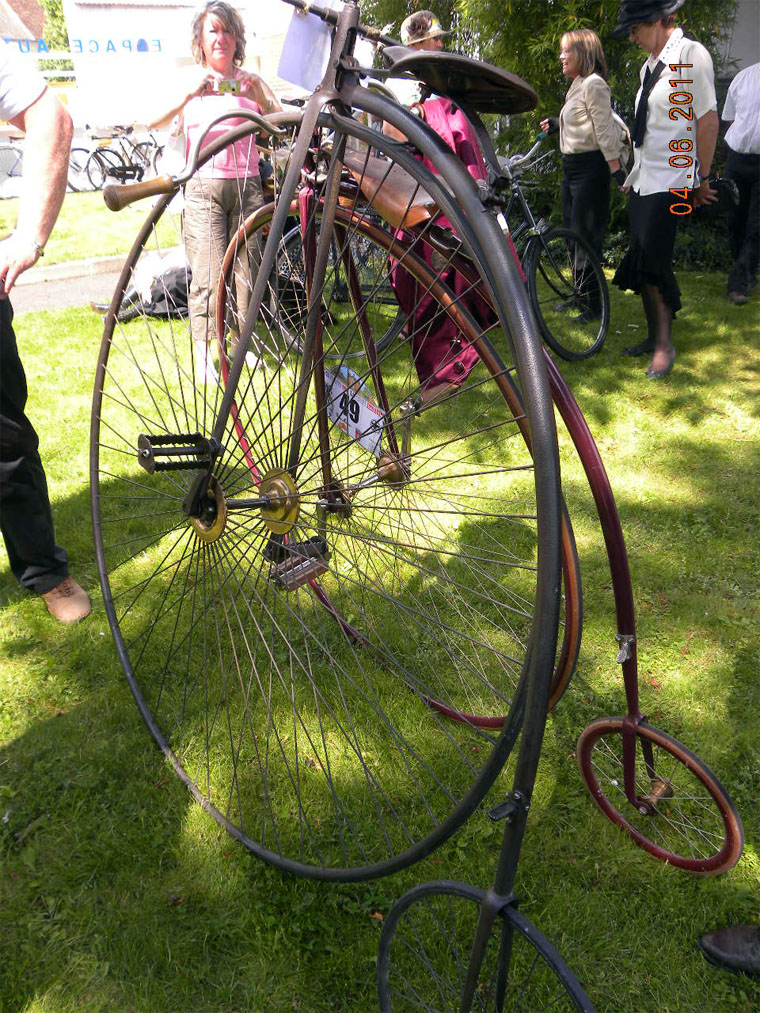 c1880 Bicycles of the Year, by H. Hewitt Griffin (London Athletic Club, Bicycle Touring Club, &c).: The Hollow Spoke (James Carver, Alfred-Street Mills, Nottingham). - When first introduced in the end of 1877, the hollow spokes- by reason of their great novelty - rapidly gained a wide-spread notoriety; but it was soon seen that merit lay behind the innovation, and the Carver was speedily found among the established favourites, a position it has since then occupied. Although we gave a very full description of this remarkable machine in our issue for 27th April, 1878, there are doubtless many readers who know the machine by name, but are not well versed in its component parts, and, therefore, a recapitulation of them will not be uninteresting. First and foremost the hollow spokes demand attention. Their large size was formerly an objection, but this has been considerably reduced, and the spokes, which were formerly of 8in. gauge, or 166 of an inch otward diameter, are now reduced to 12 gauge, or 125in., the change effecting a great improvement in the appearance. The spokes themselves are formed from fine sheet steel, which is by powerful pressure, rolled up into the form of a tube; the edges are brought into close juxta-position, but scarecely touch. Some riders fancied that moisture would percolate through this narrow slit and cause the spoke to rust away inside. Such is not the case; the insides are coated with the natural "scale" of the metal, which not only strengthens it but effectually prevents it becoming oxidised. As the thin metal of the spoke would not bear a thread being cut on it, a taper plug is brazed into either end for a couple of inches; this is thicker - in fact, of 8in. gauge - so that the portion screwing into the hub has abundant strength; the same remark applies to the other end, which is headed into the rim. The spokes are enormously strong, and will withstand almost any strain that can be thrown on the,. It is almost impossible to bend a short section by means of the hand alone..."[1]

1882 "Having received so large a share of the patronage of the bicycling world since my commencement in 1877 as a manufacturer of Hollow and Solid Spoke Bicycles, I look forward to receiving continued support during the coming season, and can as sure my friends that no effort of mine shall be spared to keep up the high reputation my machines have already attained. I am unable to announce any reduction in my list this year, but a comparison with the prices obtained by other first-class manufacturers will prove that mine are already considerably lower in price than any other important make, and that the " Carver " stands preeminent for elegance, finish, good materials, strength, and cheapness. I have decided to put fluted hind forks of an improved pattern to all my machines without extra charge and thereby attain that very desirable object, the maximum of strength with the minimum of lightness. I have also perfected the shackle arrangement, making the spring most comfortable and easy to ride, and have adopted Andrews' Improved Centre Steering, which is so highly recommended by all experienced riders..."[2]