Grace's Guide is the leading source of historical information on industry and manufacturing in Britain. This web publication contains 140,730 pages of information and 227,385 images on early companies, their products and the people who designed and built them. 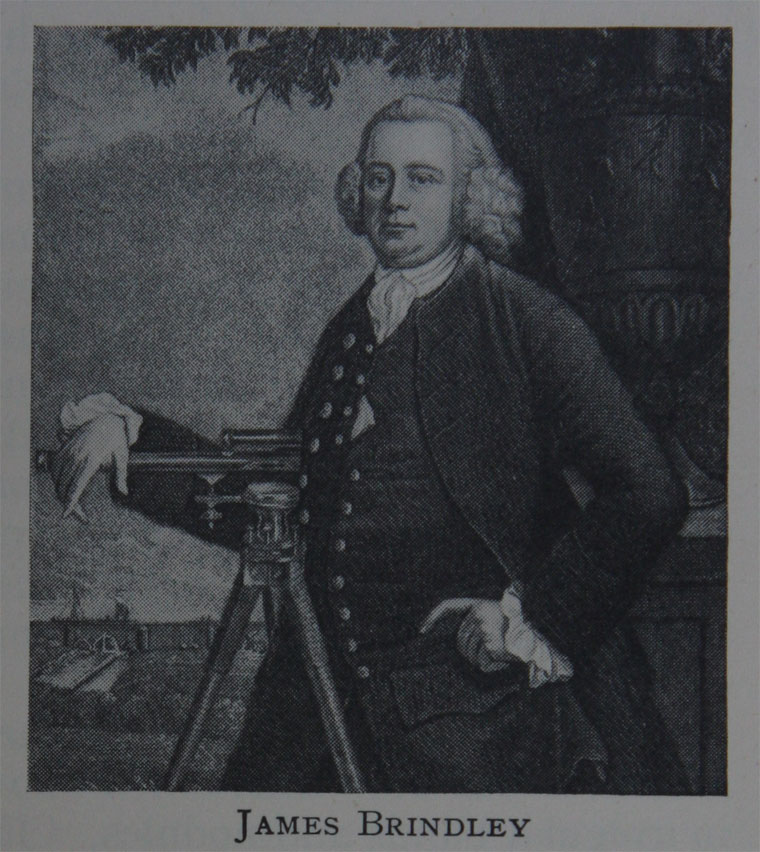 James Brindley (1716–1772) was an English engineer. He was born in Tunstead, Derbyshire, and lived much of his life in Leek, Staffordshire, becoming one of the most notable engineers of the 18th century.

1716 Born into a farming family in the Peak District, which in those days was extremely isolated, he received little formal education.

1733 At age 17, encouraged by his mother, he was apprenticed to a millwright in Sutton, Macclesfield.

Having completed his apprenticeship he set up business for himself as a wheelwright in Leek.

1752 He soon established a reputation for ingenuity and skill at repairing many different kinds of machinery. In 1752 he designed and built an engine for draining a coal mine, the Wet Earth Colliery at Clifton in Lancashire.

1755 Three years later he built a machine for a silk-mill at Congleton.

1756 Erected a Newcomen pumping engine at Fenton Vivian, Staffordshire. The cylinder was made from hooped staves. It proved very troublesome.[1]

His reputation brought him to the attention of the 3rd Duke of Bridgewater who was looking for a way to improve the transport of coal from his coal mines at Worsley to Manchester.

In 1759 The Duke commissioned Brindley to construct a canal to do just that. The resulting Bridgewater Canal, opened in 1761, is often regarded as the first British canal of the modern era (though the Sankey Canal has a good claim to that title), and was a major technical triumph. The most impressive feature of the canal was an aqueduct which carried the canal at an elevation of 13 metres (39 feet) over the River Irwell at Barton.

Brindley's reputation soon spread and he was soon commissioned to construct more canals. He extended the Bridgewater to Runcorn, connecting it to his next major work, the Trent and Mersey Canal.

1762 Brindley believed it would be possible to use canals to link the four great rivers of England: the Mersey, Trent, Severn and Thames (the "Grand Cross" scheme). In 1762 he 'set out for Chester and Shropshire survey or a raconitering' according to his diary. He had with him a sketch map of the continuation of the Dee southwards past Whitchurch.

Since the potteries around Stoke-on-Trent were in desperate need of something better than the pack-horse to carry their fragile wares, they wholeheartedly supported the connection of Staffordshire to the Trent and to the Mersey. The first sod was cut by Josiah Wedgwood in 1766 and Brindley carried it away in a barrow. From Runcorn, it would climb by a series of thirty-five locks to Harecastle, pass through a three thousand yard long tunnel, then descend by a further forty locks to join the Trent at Wilden Ferry, near Shardlow. There was mounting ridicule about his scheme and in the event, although the canal opened from Sharlow to near Stafford in 1770, it took eleven years to drive the tunnel.

The Trent and Mersey Canal was the first part of this ambitious network, and the later Chester Canal, started in 1772, was also a result.

Although he and his assistants surveyed the whole potential system, for, from the start, he had asserted his view of the Trent and Mersey as the "Grand Trunk Canal" – the first part of the Grand Cross of waterways across the country – he would not live to see it completed. The Harecastle Tunnel finally opened in 1777 and coal was finally transported from the Midlands to the Thames at Oxford in January 1790 – 18 years after his death. Development of the network, therefore, had to be left to other engineers, such as Thomas Telford

In total, throughout his life Brindley built 365 miles of canals and many watermills, including the Staffordshire and Worcestershire Canal the Coventry Canal, the Oxford Canal and numerous others, and he also constructed the watermill at Leek, now the Brindley Water Museum.

In 1771, work had begun on the Chesterfield Canal, but while surveying a new branch of the Trent and Mersey Canal between Froghall and Leek, he was drenched in a severe rain storm. It had happened many times before, but he was unable to dry out properly at the inn at which he was staying, and caught a chill. He became seriously ill and returned to his home at Turnhurst, Staffordshire, where Erasmus Darwin attended him and discovered that he was suffering from diabetes.

1772 September 30th. He died at Turnhurst within sight of the unfinished Harecastle Tunnel, just nine days after the completion of his Birmingham Canal. 'At Turnhurst, in Staffordshire, after a long illness, aged 55, James Brindley, engineer: A natural genius, wise without the schools. Early in life he gave indications of uncommon talents and extensive views in the application of mechanical principles; and a happy coincidence of circumstances, the chief of which was his being employed by the Duke of Bridgewater in planning and overseeing his inland navigations, gave him an opportunity of unfolding and displaying his wonderful powers in the execution of works new to his country.'[2]