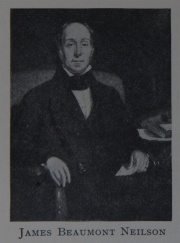 1792 Born at Shettleston on 22nd June. His father was engine-wright at Govan colliery

c.1808 Apprenticed to his brother John at Oakbank

c.1817 Appointed superintendent and foreman at the first gas works in Glasgow

Promoted to manager and engineer. Invented the "swallow-tail" burner and several other improvements in gas manufacturing.

1824/8 James Beaumont Neilson invented the hot blast process for iron furnaces. He was not in a position to conduct the practical trials to prove the value of his invention, so he sold some of his interest in the patent to a syndicate of Charles McIntosh of Crossbasket, Colin Dunlop of Tollcross, and John Wilson of Dundyvan. The value of the invention was demonstrated by a series of experiments at Clyde Iron Works; this transformed the cost of iron production and led to the meteoric rise of the Scottish Iron industry, particularly in the Coatbridge area. Within a few years it was in general use in Great Britain and various continental countries, the United States, and India.

1840 Various ironmasters in combination attacked Neilson's patent but in vain.

He was elected a member of the Institution of Civil Engineers, of the Chemical Society,

1846 Elected to the Royal Society of London.

1865 died at home, Queenshill, Kirkcudbrightshire, on the 18th January.

James Beaumont Neilson, the inventor of the system of the application of Hot Blast to Iron Furnaces, was born on the 22nd of June, 1792, at Shettleston, near Glasgow.

His father was an engineer, or what at that time was called an engine-wright. Beaumont, as he was usually named, was the younger of two sons. John, some years his senior, received a classical education; but, instead of going into the Church, he adopted the profession or trade of his father, and at his works, in 1825, designed, and afterwards constructed, an iron steamer which, following the 'Aaron Manby,' built in 1820, was among the early iron vessels that went to sea.

Beaumont, while still a youth, assisted his father in erecting and working steam-engines employed for mining purposes, and was subsequently an apprentice in his brother’s works. In 1814 he obtained a situation as engine-wright at a colliery in Ayrshire, and in 1817 was appointed Engineer of the gas-works then being established in Glasgow.

During the time he retained the position of Engineer and Manager to the Gas Company, which he resigned in 1837, the Company’s works were greatly extended, and Mr. Neilson introduced many improvements in the manufacture of gas, rising to great eminence as a gas engineer. He substituted clay for iron in the construction of the retorts, heated the retort ovens, as early as 1826, entirely with the waste coal tar employed as liquid fuel, and introduced the use of sulphate of iron solutions to remove the ammonia from coal gas in the process of purifying.

Although not one of the most important, yet probably the most ingenious of his inventions in gas engineering was the swallow-tail burner, now in universal use.

He was also amongst the first who constructed large roofs entirely of iron. Mr. Neilson had his attention drawn to the circumstance of the irregularity of the action of blast furnaces, more particularly the difference between the working of the same furnace in summer and in winter. Having been consulted by an iron-maker as to the practicability of submitting the air-blast to some chemical purifying process, he at first thought that the air ought to be freed from moisture, and the action of the oxygen increased in the furnace.

He then commenced a series of experiments, the result of which was the Hot Blast Patent, dated 1st October, 1828. The title of the patent was written by the late Lord Brougham. Not having either the pecuniary means or the influence necessary to induce the iron-makers to adopt his invention, Mr. Neilson gave three-tenths of the patent to his friend and adviser, Charles Macintosh - the well-known manufacturer of water-proof cloth - three-tenths to Colin Dunlop, of the Clyde Iron-works, and one-tenth to John Wilson, of the Dundyvan Iron-works, retaining only three-tenths for himself.

Iron-makers were originally much prejudiced against the invention, it being generally considered that the colder the blast-air could be made the better - refrigerators, even with ice, having in some cases been tried. After meeting many obstacles, and overcoming many difficulties, the patentees succeeded in having their invention tried. Every trial was a success, and in a few years the Hot Blast system became generally adopted by all the iron-makers in Scotland.

A clear saving of thirty-two shillings per ton of pig-iron made, as compared with the old cold-blast system, was obtained, and the quantity of iron produced by each furnace was doubled. Notwithstanding, the troubles of the patentees continued; for although only one shilling per ton royalty was demanded, the iron-masters in Scotland set about to attempt to destroy Mr. Neilson’s patent. This, however, was vigorously and successfully defended. But in 1840 a confederation was secretly formed by a number of the wealthy iron-masters, who bound themselves under a formal deed 'To institute, defend, carry on, and follow out to a conclusion, such actions, and generally to adopt such proceedings, judicial and extra-judicial, as their advocates, or the survivors of them, shall advise to be expedient and proper for setting aside the said letters patent, and for resisting the enforcement of the claims founded by the said James Beaumont Neilson, &c.'

The struggle between the patentees and the confederate iron-masters continued from 1839 to 1844. Twice a jury refused to deprive Mr. Neilson of his rights. Twice mere appeals to the House of Lords unsuccessful. Two jury trials occupied sixteen days, and about one hundred and forty witnesses were examined. At one and the same time, twenty different actions mere carried on, and the litigants spent between them, on law charges alone, not less than £40,000.

Mr. Neilson was much discouraged, but the firmness and determination of his co-patentees carried him through his difficulties and he realised a moderate fortune. It has been estimated that this country has been benefited by this invention to the extent of about twelve millions sterling per annum, and that an impetus was thus given to those great works in which cheapness and abundance of iron are necessary.

Mr. James Beaumont Neilson was elected a Member of the Institution of Civil Engineers on the 29th of May, 1832, whilst he was Engineer and Manager of the Glasgow Gas-works, and he died at his residence, Queenshill, Kirkcudbrightshire, on the 18th of January, 1865, in the seventy-third year of his age.