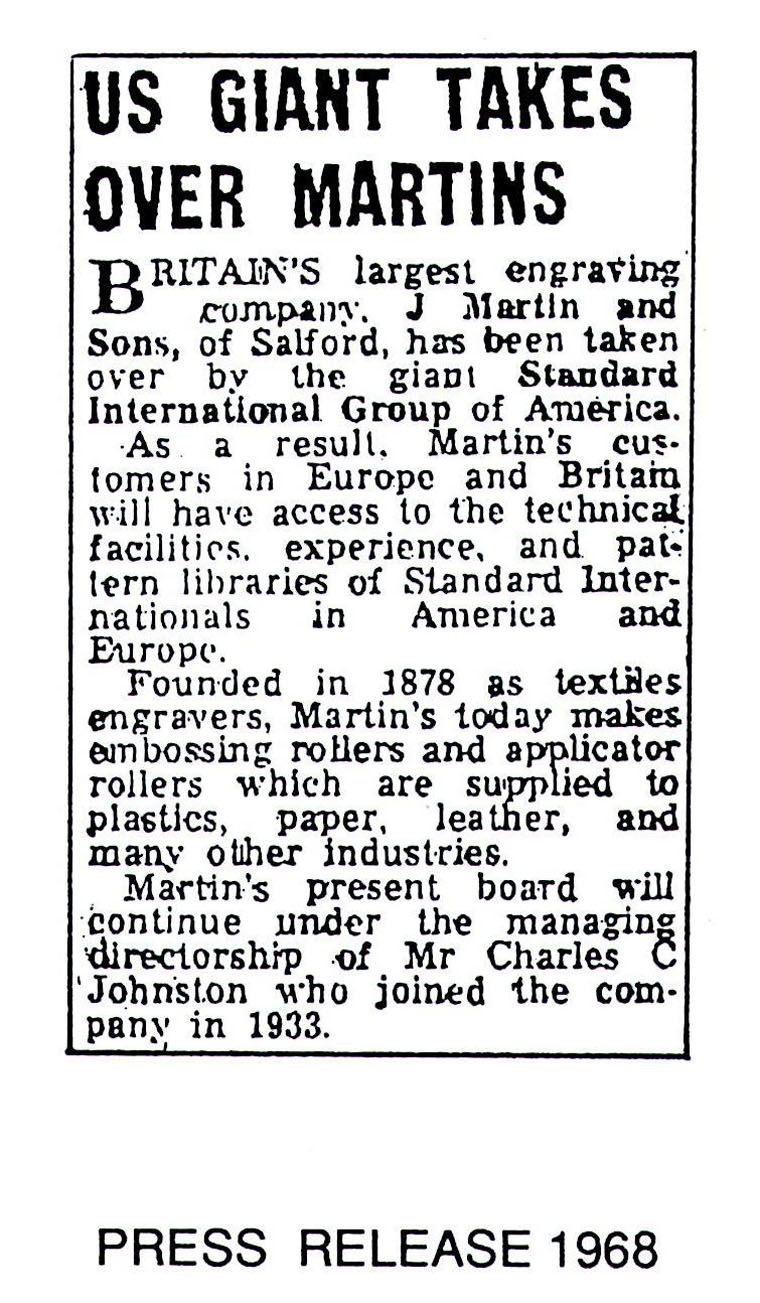 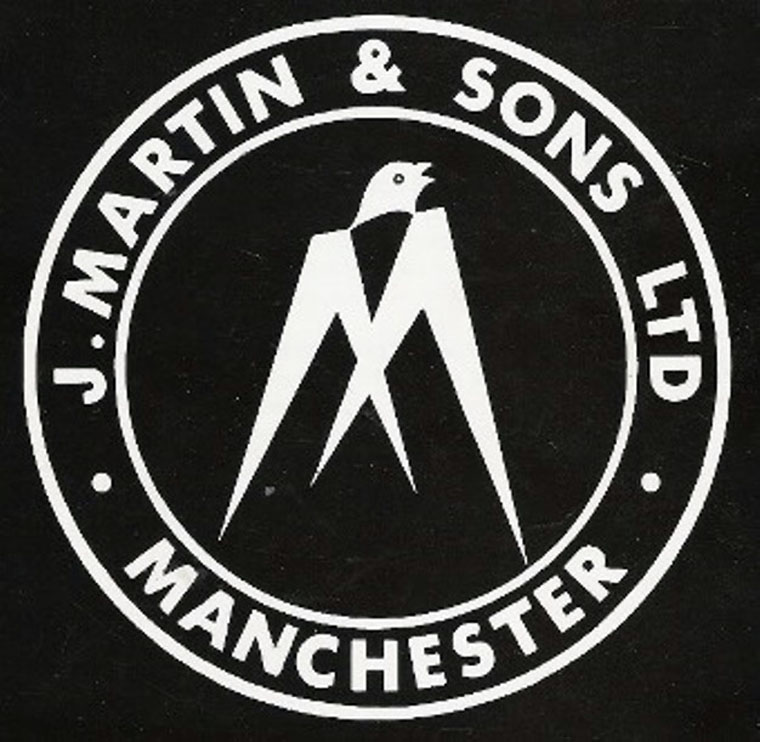 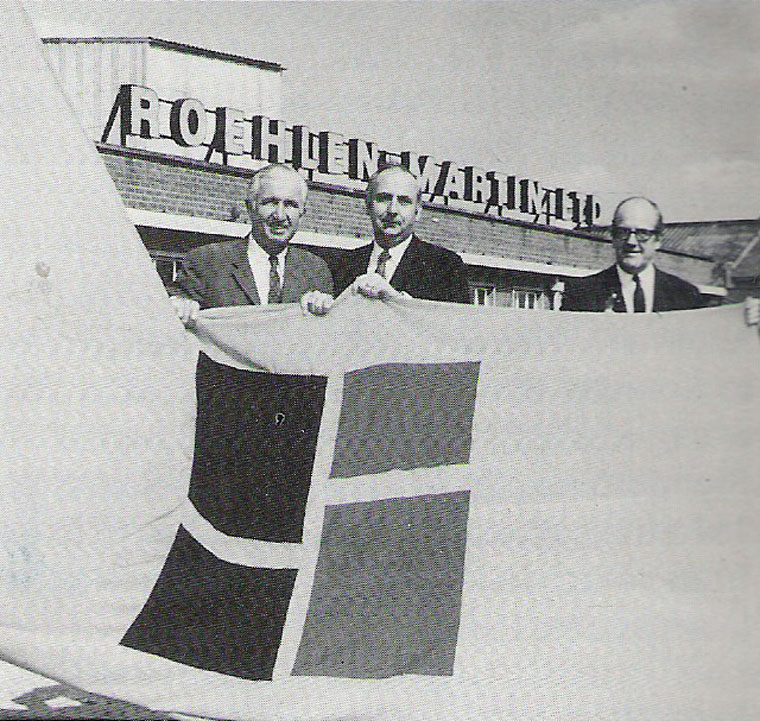 1970. Outside the new Roehlen-Martin premises in Bredbury, Stockport (at right: Charles Johnston - The last MD of Martin's retained by the new owners. Also Dan Hogan and Warren Cooper.). 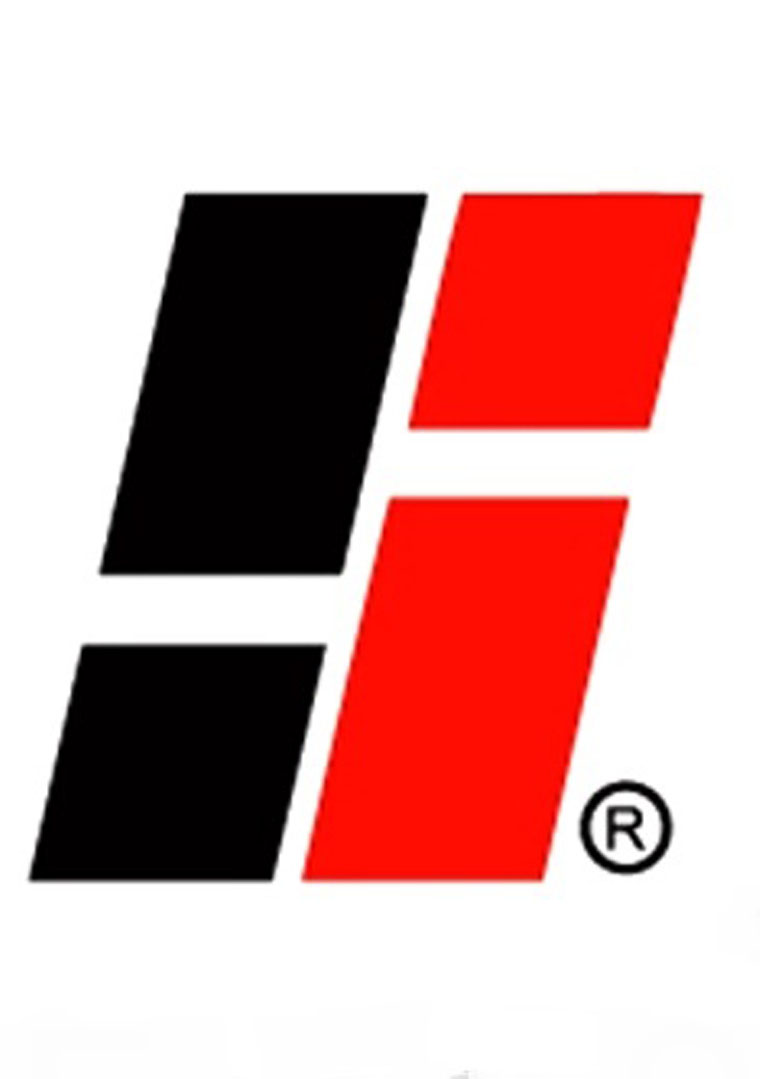 1878 Company founded and styled as 'Engravers to Calico Printers'.

1907 Incorporated as a Private Limited Company. The Works and Registered Office of the Company were at 17 Trafalgar Street East, Bury New Road, Manchester 8. There were three directors:- William and Thomas Martin (both sons of the founder of the firm J. Martin) and Thomas Flintoff.

By 1914 both William and Thomas Martin had died and Thomas Flintoff became Managing Director, eventually acquiring a controlling interest in the Company by owning the majority of the Shares.

In 1943 Thomas Flintoff died and his Shares with their controlling interest passed to his widow, Marion Flintoff, who became a Director, and in 1945 Gilbert Martin became Managing Director of the Company.

Up to the end of World War Two, J. Martin and Sons predominately only used three methods of engraving printing rollers, which included hand engraving, mill engraving and pentagraph engraving.

1947 The company split its textile and emboss engraving production. Textile engraving was moved to Trafalgar Street Works and was overseen by Gilbert Martin and Charles Johnston took directorship of the engraving of embossing news at the Ardwick Works.

c1950s J. Martin and Sons formed Ardgreen Process Ltd to own and operate the Photo Electric Pentagraph they'd purchased from a subsidiary company of Olivetti, Turin.

1962 Signing of a Licence Agreement in 1962 between Roll, Die and Mold Decorators Inc. and Martins, giving the Company the sole rights on a royalty basis to operate the mould engraving process in Europe, Australia and New Zealand. The name "MARTEX" was adopted for the name of this process.

1968 Became known as Roehlen-Martin Ltd, a division of the giant Standard International Corporation of America.

1970 The present works at Bredbury were purchased from a firm called Edibrac.