Difference between revisions of "J. Elce and Co" 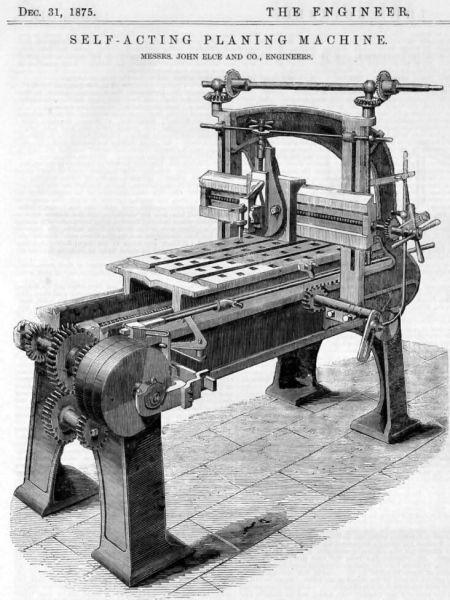 Planing machine featured in 'The Engineer', 31st Dec 1875. It is assumed that this was made by the same John Elce & Co, although the address is not stated in the article

1840 'THE LATE FIRE.- JOHN ELCE and CO., Machinests and Tool Makers, beg to inform their Friends and the Public that in consequence of the late fire in Little Lever-street, they have REMOVED to the premises lately occupied by Messrs. Evan Jones and Son. Jersey-street. Great Ancoats-street, where they continue the business as above, and take this opportunity of returning their thanks for the support already received, and hope to meet a continuance of the same. 88, Jersey-street, Manchester. April 10th, 1840.'[1]

Makers of textile machinery. Two examples of numerous patents are given below.

1851 Shown on Adshead's 1851 map of Manchester as J. Elce & Co Phoenix Iron Works, bounded by Jersey Street, Poland Street, and a branch of the Rochdale Canal.

1863 Patent 168 issued to John Bell, Foreman, and John Speight, Fitter, both in the employ of John Elce & Co of the Phoenix Iron Works, Jersey Street, Manchester, for certain improvements in the construction of carding engines [7]

1865 Took limited liability to a value of £200,000. John Elce and Co of Phoenix Ironworks, Manchester have been in business for more than thirty years [8]