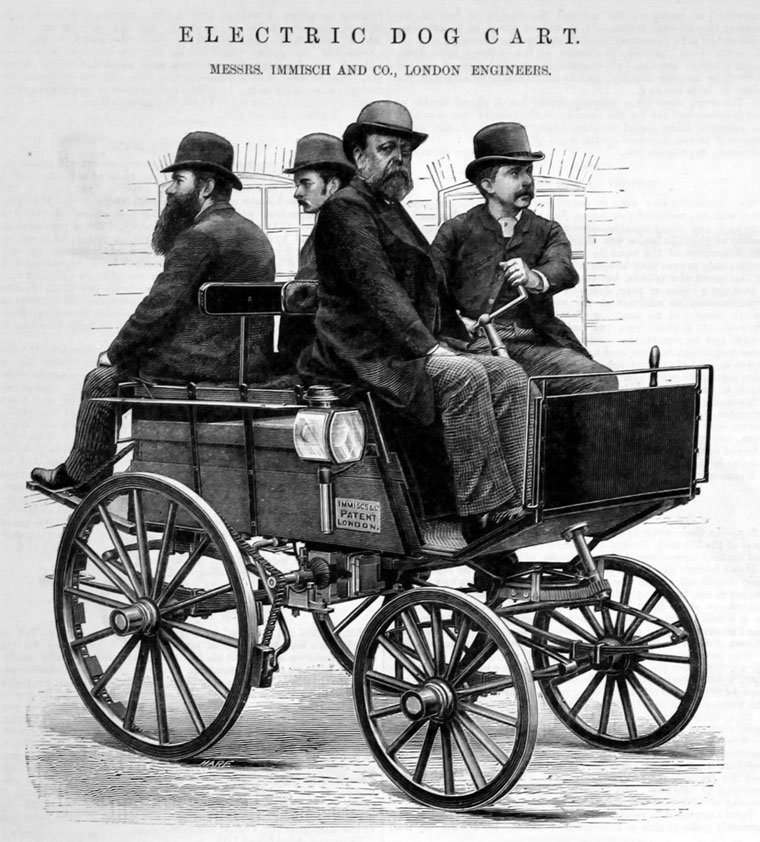 1882 Moritz Immisch, with a small number of friends and colleagues, established a small company Messrs M. Immisch & Co. with works in Kentish Town, first at Perry Road and then much more substantially at the larger premises at 19 Malden Crescent. Foremost amongst the partners was Immisch's friend and partner, Frederick William John Hubel, who was himself formerly involved in watchwork, but who left the trade to become an 'electrician'.

The company spent several years improving the existing design of direct current motors, improving their efficiency and power-to-weight performance compared to contemporary manufacturers. The company was particularly active in seeking new industrial applications for their products.

1887 onwards: Immisch motors, geared with chains made by Hans Renold, were fitted to a series of electrical carriages and dog-carts. The first two electric vehicles were carried out in association with Magnus Volk, himself an inventor and engineer.

From 1888 the company had notable success in the application of their motors to pumping and haulage work in mines, carrying out installations in England, Scotland and Wales.

Immisch & Co also employed Magnus Volk as a manager in the development of their electric launch department - probably the world's first fleet of electric launches for hire, with a chain of electrical charging stations established along the River Thames. The company built its headquarters on the island called Platt's Eyot. After 12 months of experimental work starting in 1888 with a randan skiff, the firm commissioned the construction of hulls which they equipped with electrical apparatus. From 1889 until just before the First World War the boating season and regattas saw the silent electric boats plying their way up and downstream.

In 1890, with hopes of a large scale expansion of electric traction on the existing horse-drawn tramways, Immisch's Company, together with the Electric Traction Co chaired by Viscount Bury, sold itself to the General Electric Power and Traction Co. This new company soon foundered however due to its reliance on rechargeable battery traction.

1890 Hoping for a large scale expansion of electric traction on the existing horse-drawn tramways, Immisch's company, together with the Electric Traction Co chaired by Viscount Bury, sold themselves to the General Electric Power and Traction Co. This new company soon foundered however due to its reliance on rechargeable battery traction.

1891 an Immisch motor was used in a tramcar tested on the experimental John Gordon closed conduit (or closed culvert) electric tramway system. The tests took place in Merryweather and Sons' works in Greenwich, showing success although the system was not commercially adopted.

Immisch continued to be involved in manufacturing work for a couple of years in the Acme Immisch Electric Works Co, but afterwards he retained an interest only as a director in the Immisch Electric Launch Co until his resignation in 1901. Having suffered from heart problems from a number of years, he died two years later.