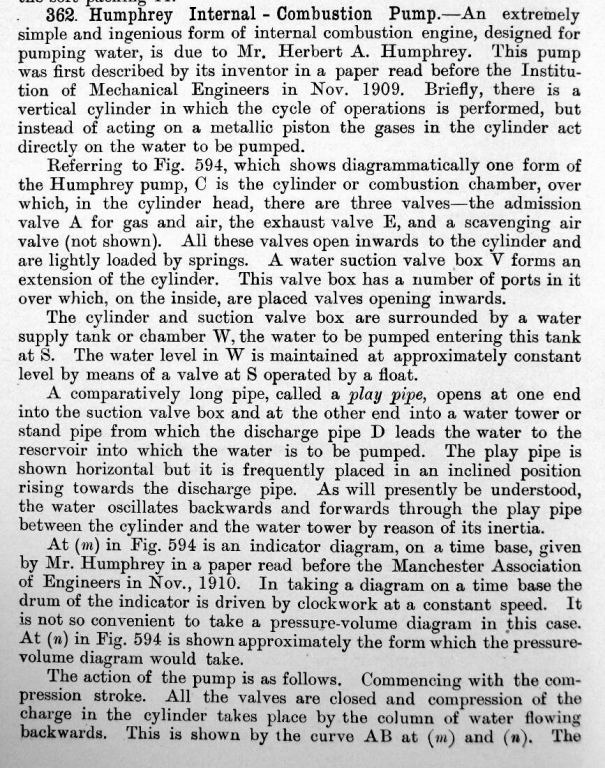 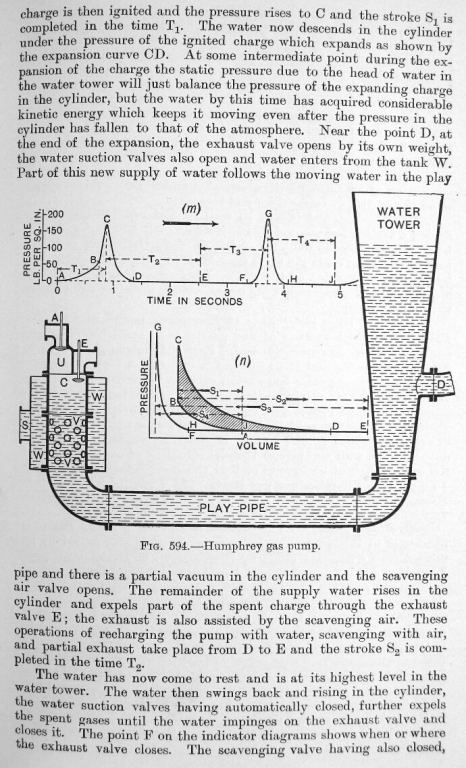 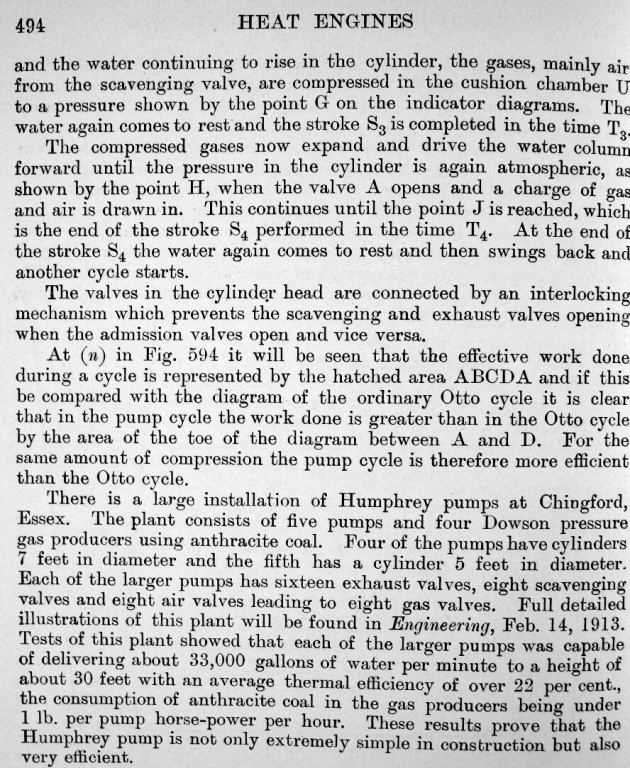 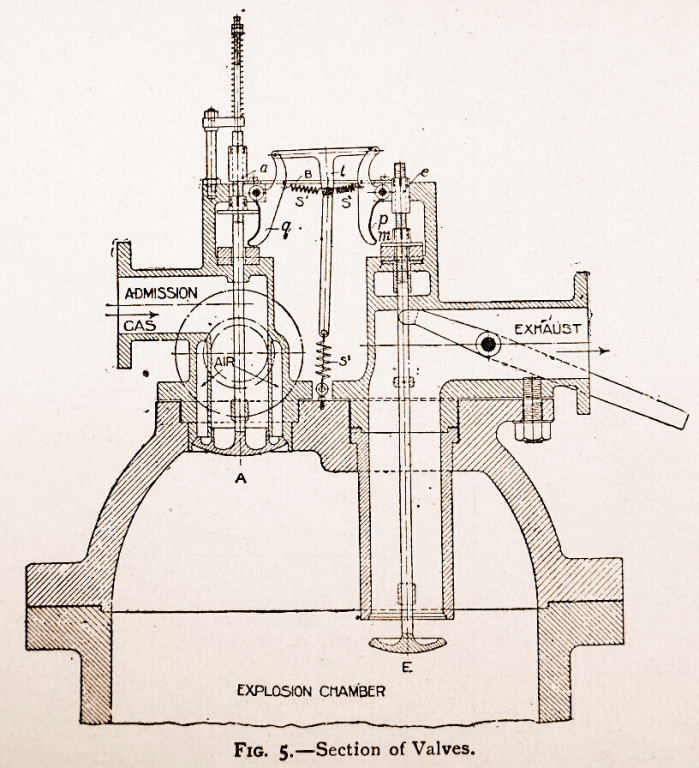 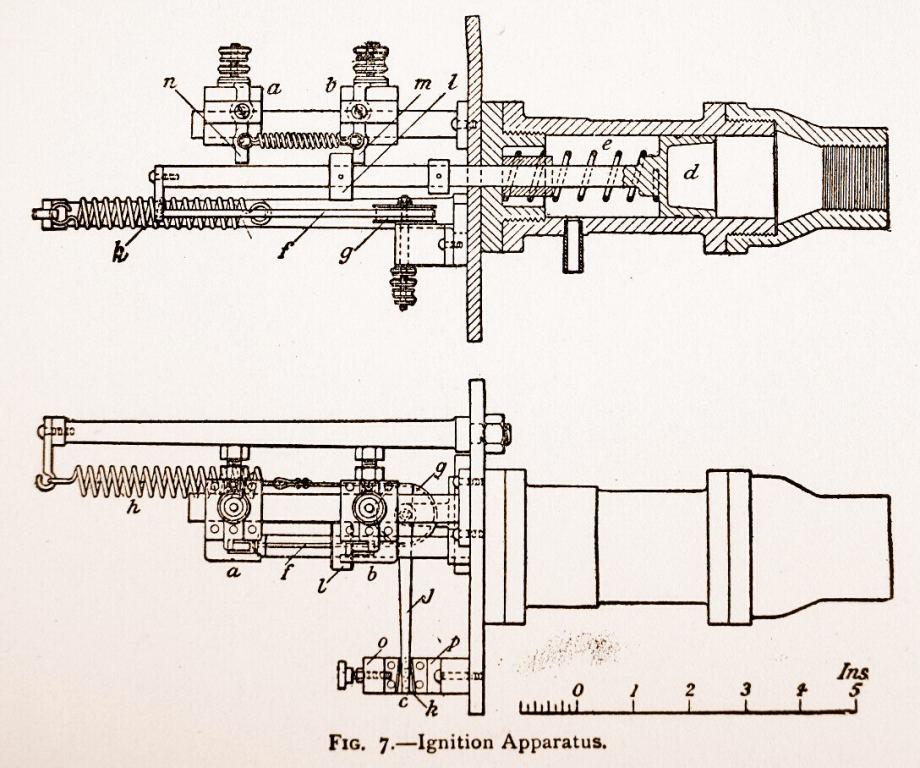 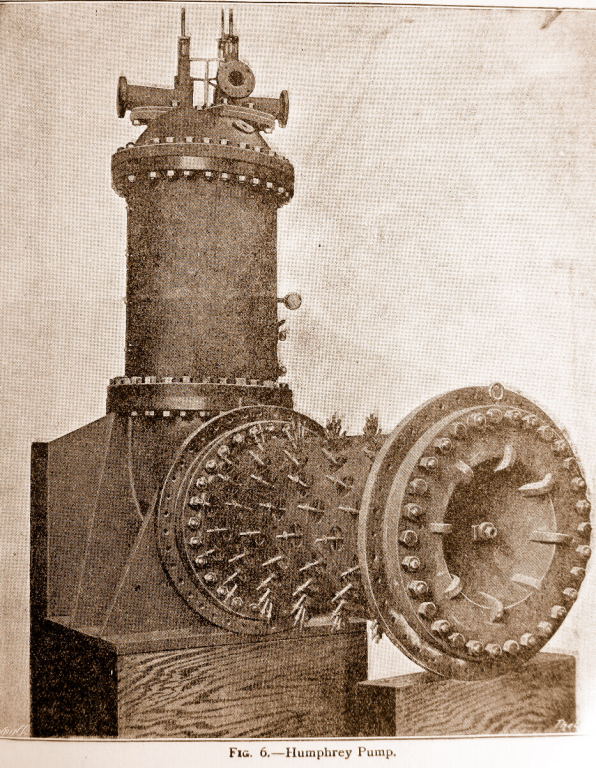 The 'spikes' are the spindles of the water inlet valves. From Rankin Kennedy

Herbert A. Humphrey was the inventor of the Humphrey Gas Pump, and was Managing Director of the Pump and Power Co Ltd, which changed its name to the Humphrey Pump Co.

1925 ' THE GAS TURBINE - The problems of the gas turbine are again brought before us by the recent paper of Mr. Konig before the North-East Coast Institution of Engineers and Shipbuilders. .... A novel form of drive is used by Stauber, Berlin. He delivers the reciprocating water column of a Humphrey pump (in which the driving force is gaseous explosion acting the water surface), through the impellers of a water turbine.'[2]

Five of the pumps are known to have survived: three at Chingford (Essex) and two at Cobdogla (South Australia), owned by SA Water. One of the pumps at Cobdogla is the only operational example, although its use is supended. The Cobdogla pumps have 66" dia cylinders, and were made by William Beardmore and Co in 1922, but were not fully operational until 1930. The gas producers (generating gas from wood) were made by May Bros of Gawler, South Australia. The pumps supplied irrigation water until 1965, but their duty was replaced by electric pumps, due to the cost of wood. However, they were preserved and operated for demonstration until 2012.[3]

A photograph of the cylinder of one of the pumps can be seen here on the website of the Cobdogla Irrigation and Steam Museum.

A short description of the principles of the pump was given in 'Heat Engines' by D. A. Low in 1920, the text being reproduced above.[4]

A more detailed description was given by Rankin Kennedy[5]. Some of the illustrations are included above. The accompanying text is not included, as it does not fully succeed in explaining the working of the equipment, but the drawing of the cylinder head does show the arrangement of two of the three valves and the interlock system. Another drawing shows the ingenious timing system - a pressure switch - used to fire the gas/air mixture when compression has reached a maximum, regardless of the height of the water.