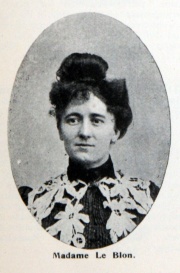 Hubert Le Blon ( -1910) was a talented racing driver and an aviator in the early years of the 20th Century.

In 1901 he entered the first international road race, the 1901 Paris-Berlin Race, won by Henry Fournier in a Mors 60HP, driving a Serpollet. And in the same car he was 13th in the 1902 Paris-Arras-Paris and participated in the disastrous Paris-Madrid race of 1903 that claimed the lives of seven people, being 17th overall when the race was stopped at Bordeaux.

In 1904 he was 5th in the Circuit des Ardennes held at Bastogne circuit, in a Hotchkiss. Two years later Hubert Le Blon participated in the Grand Prix de l'Automobile Club de France at Le Mans, then he crossed the Atlantic ocean to take part in the the 1906 William K. Vanderbilt Cup race over the Long Island course at the wheel of a Thomas, finishing in 8th place, after being 2nd to Joe Tracy's Locomobile in the Vanderbilt American Elimination.

As an aviator, Le Blon distinguished himself by setting the record for five kilometers at the Cairo in February 1910, covering the distance in 4min 2sec.

He was killed while making an exhibition flight in the Ondarreta Beach, at San Sebastian, Spain, with his Bleriot XI monoplane. Le Blon, who performed his flights from 27 March to 02 April 1910, was circling the Royal Palace of Miramar when his engine broke down and the plane dived to sea from a 150 feet altitude. The Bleriot XI monoplane crashed in inverted position at only 50 yards of the shoreline, and the pilot drowned.