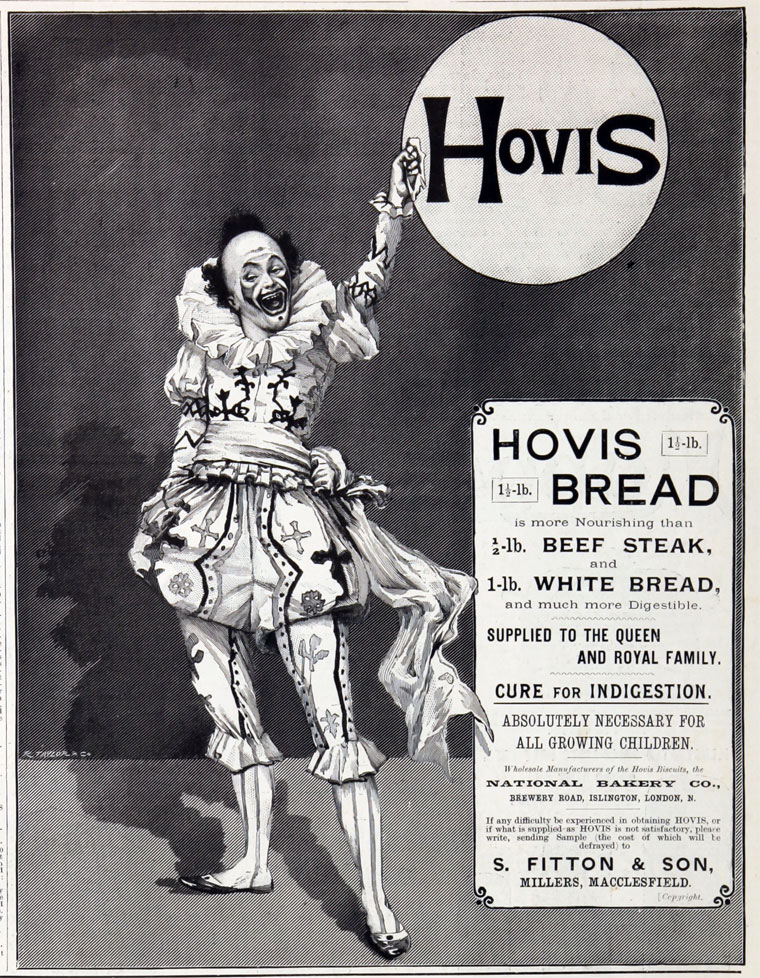 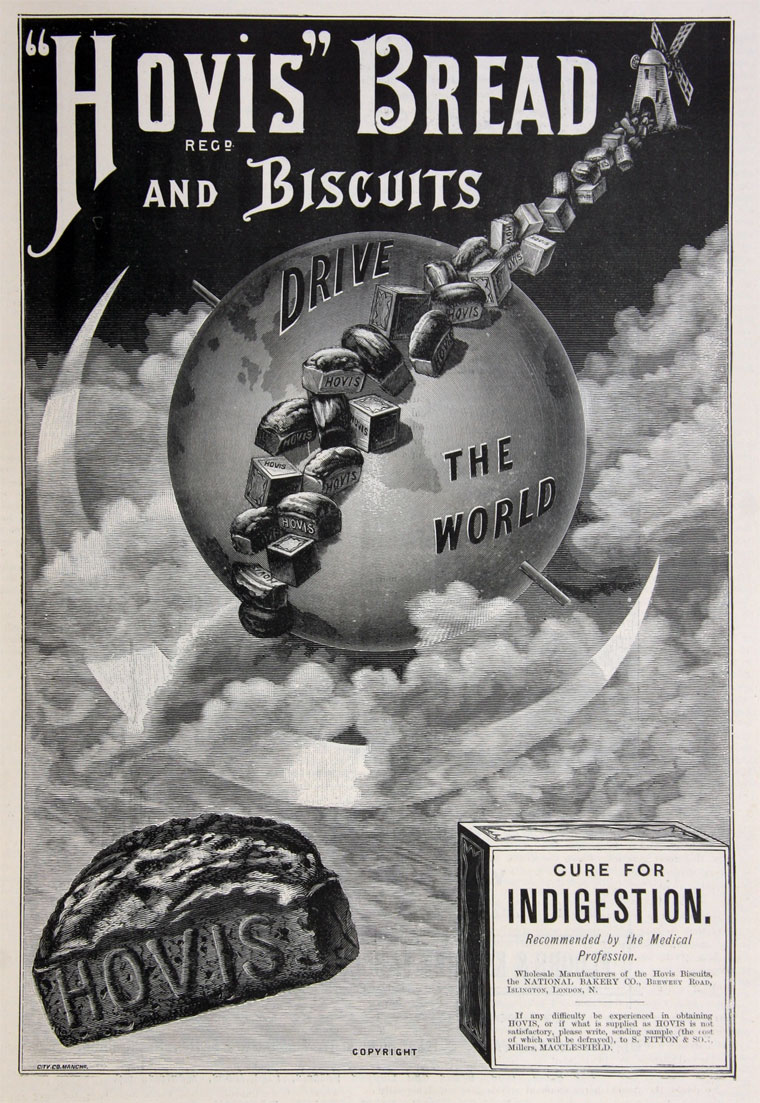 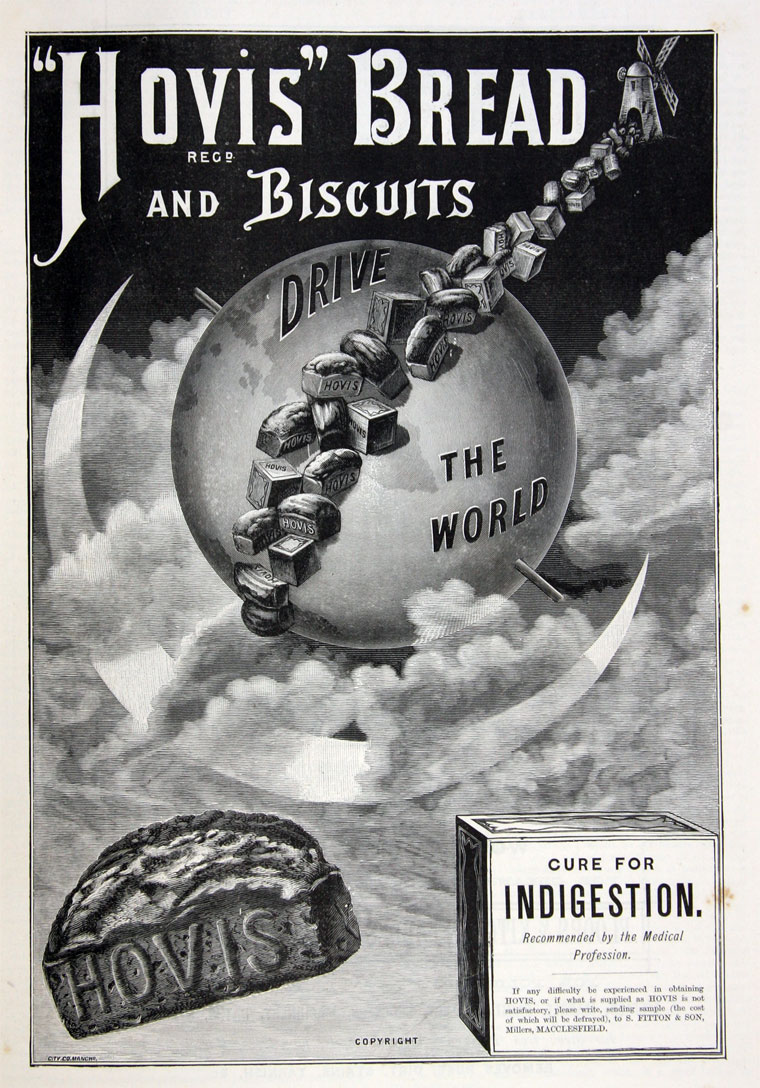 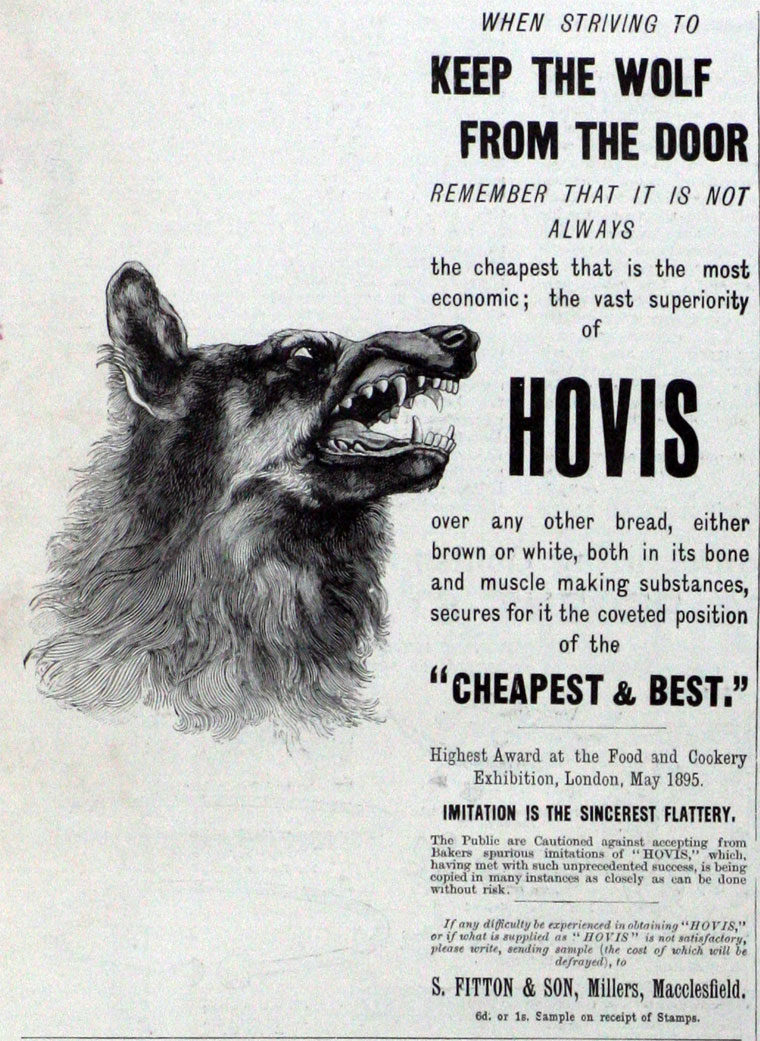 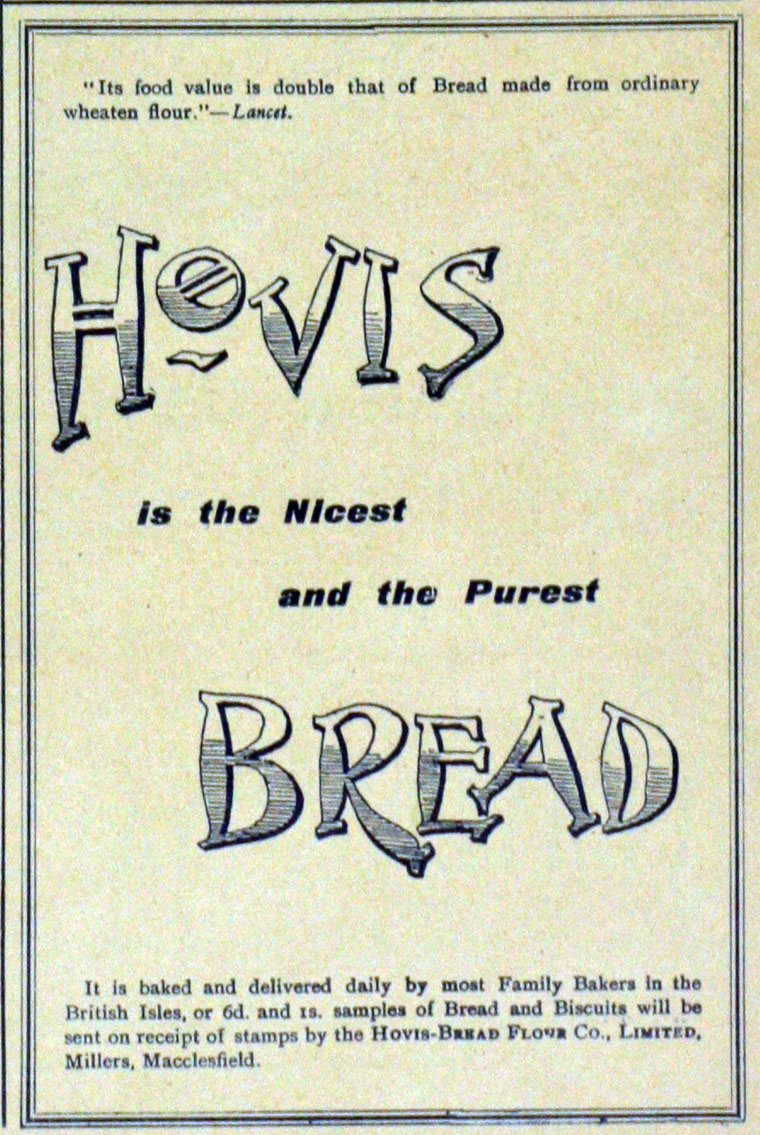 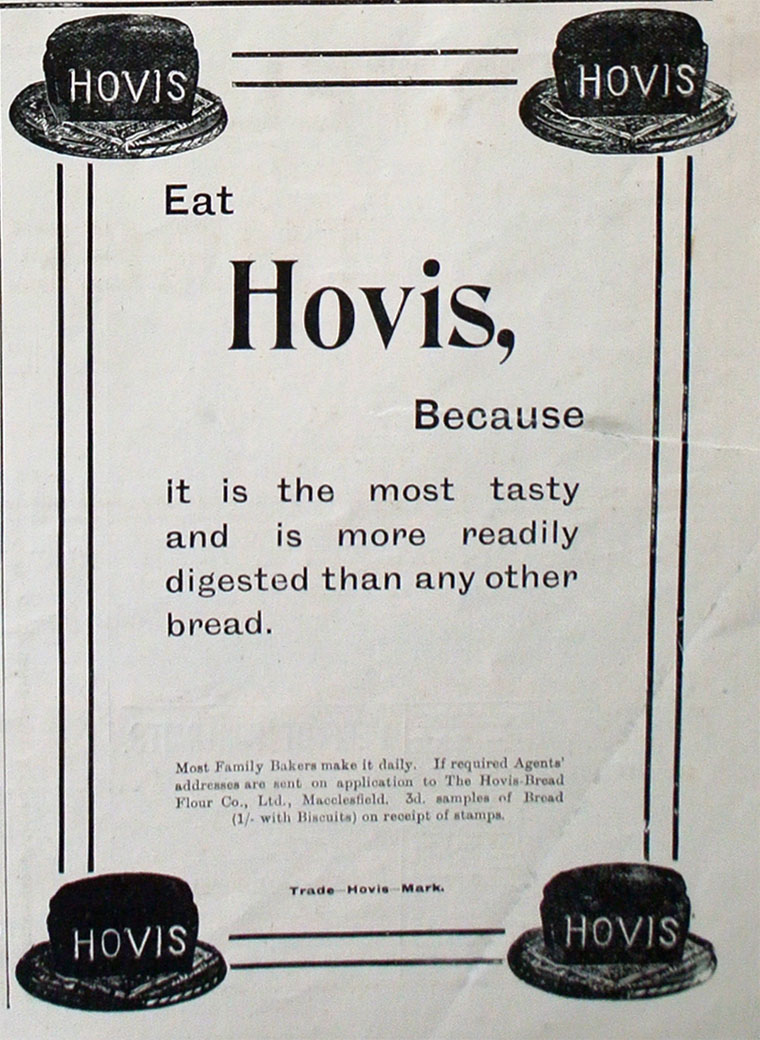 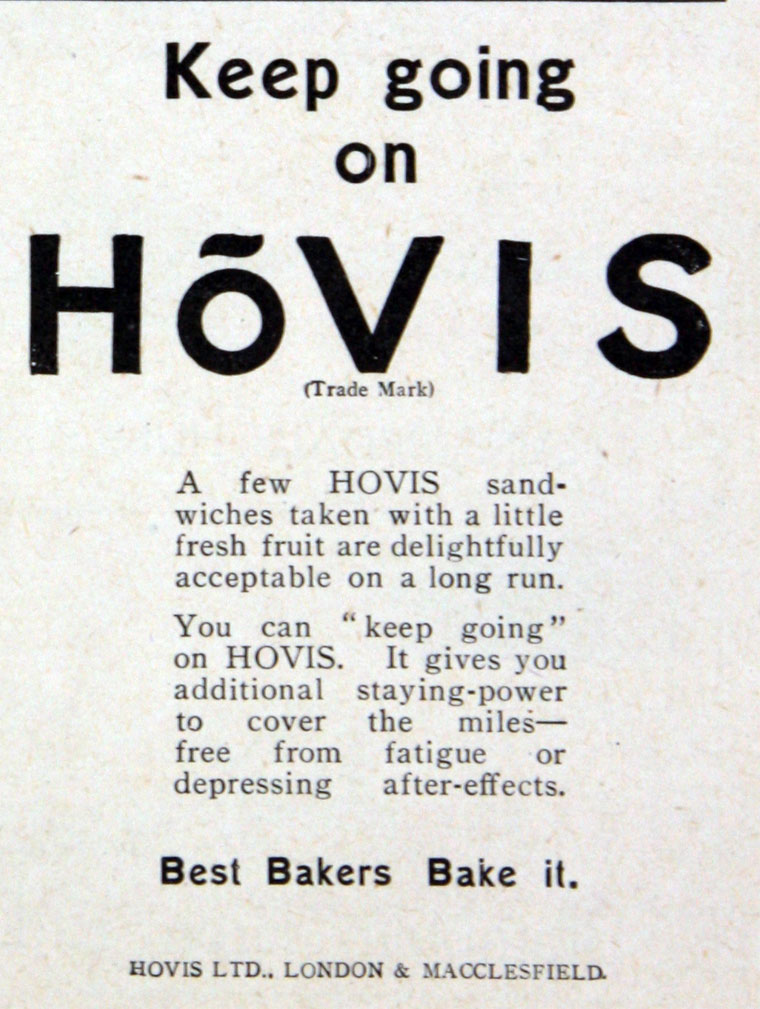 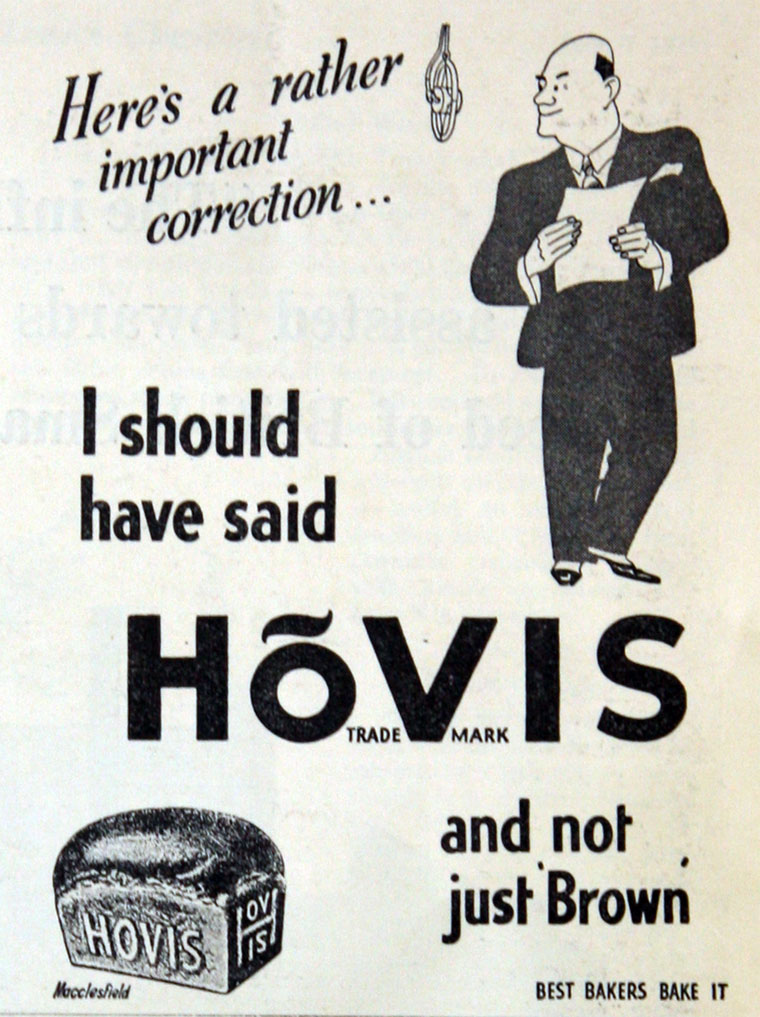 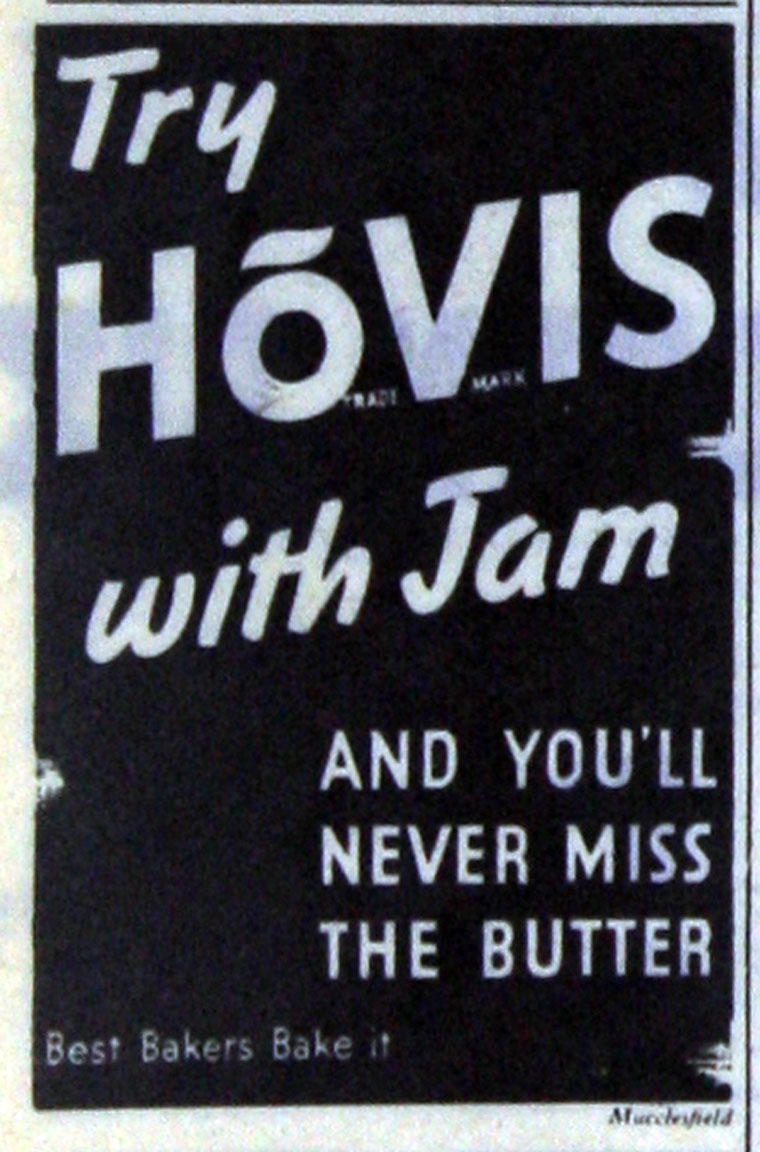 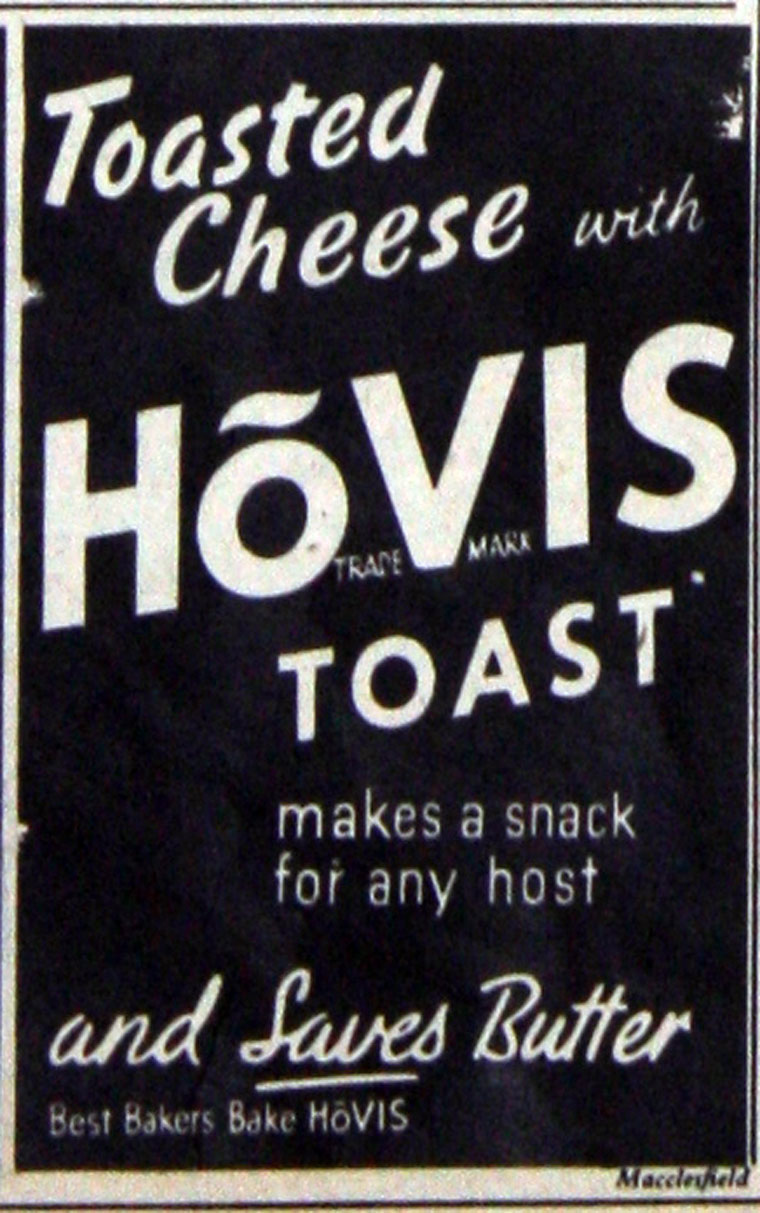 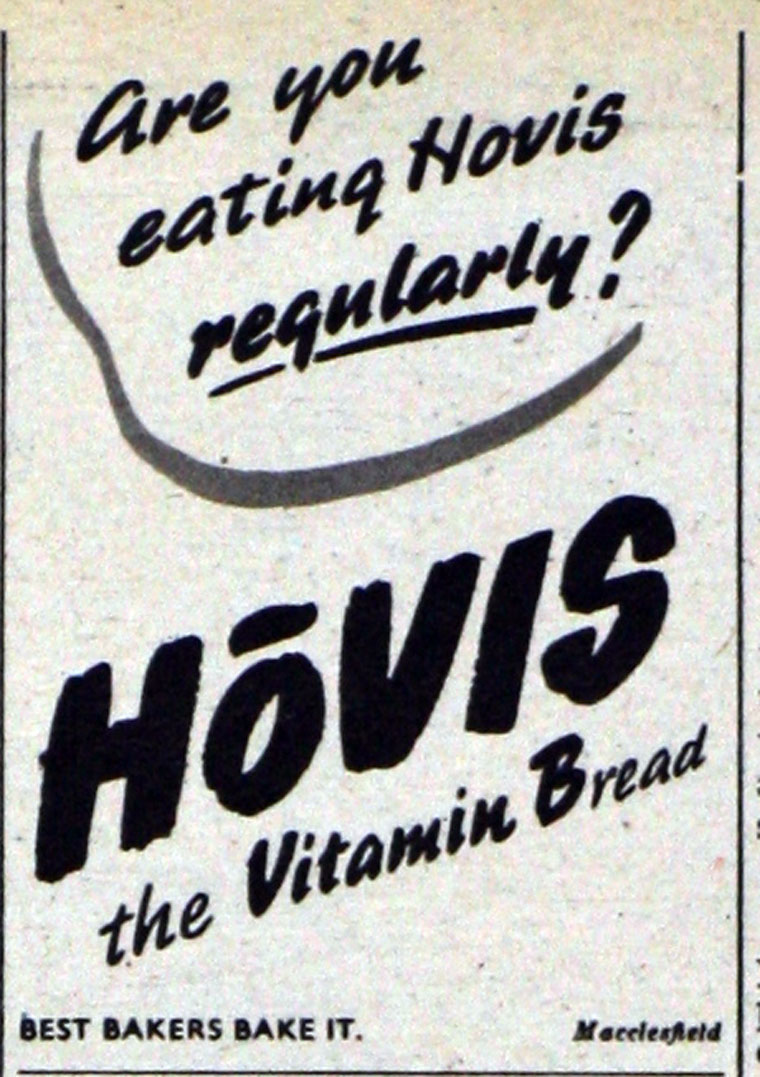 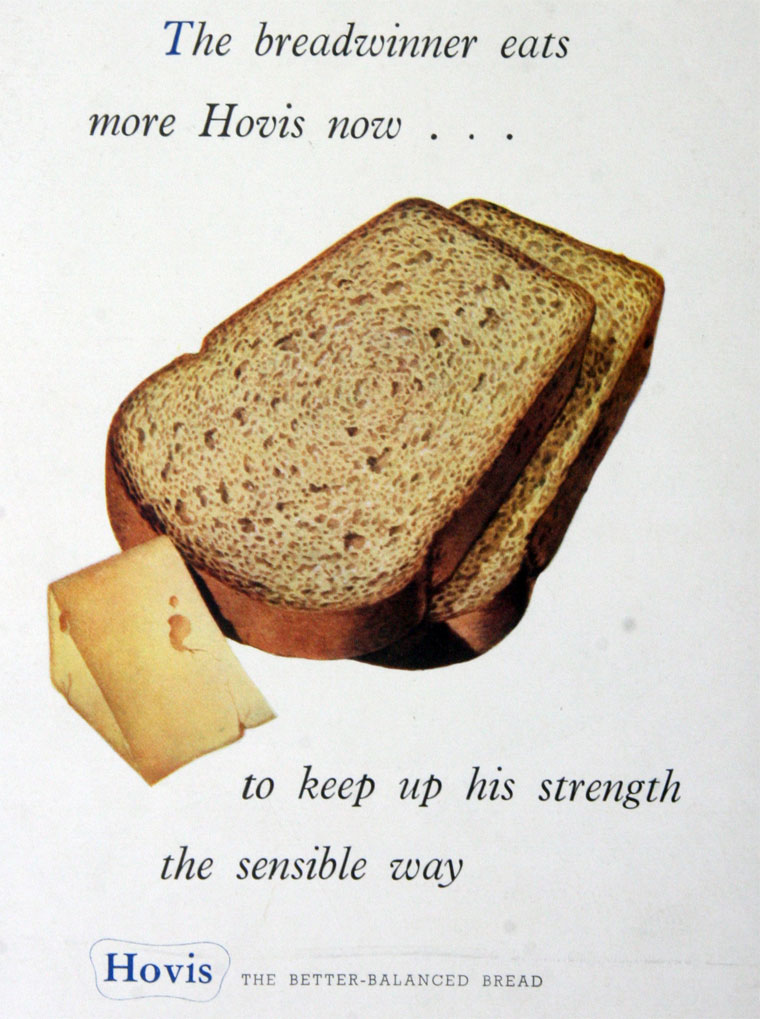 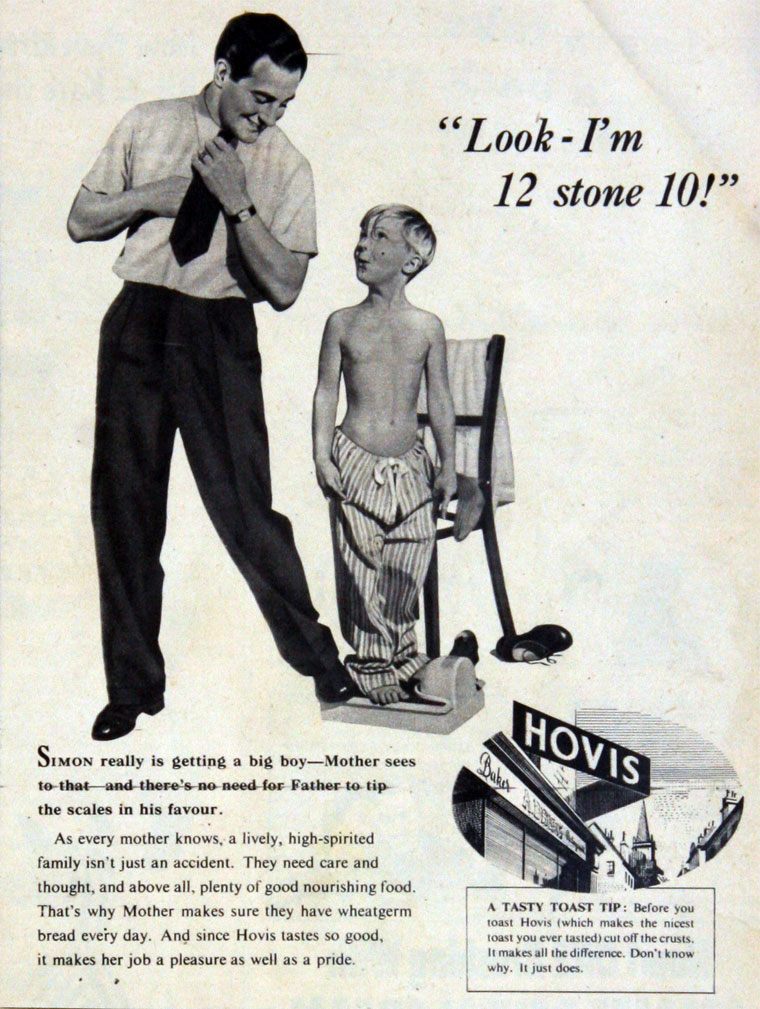 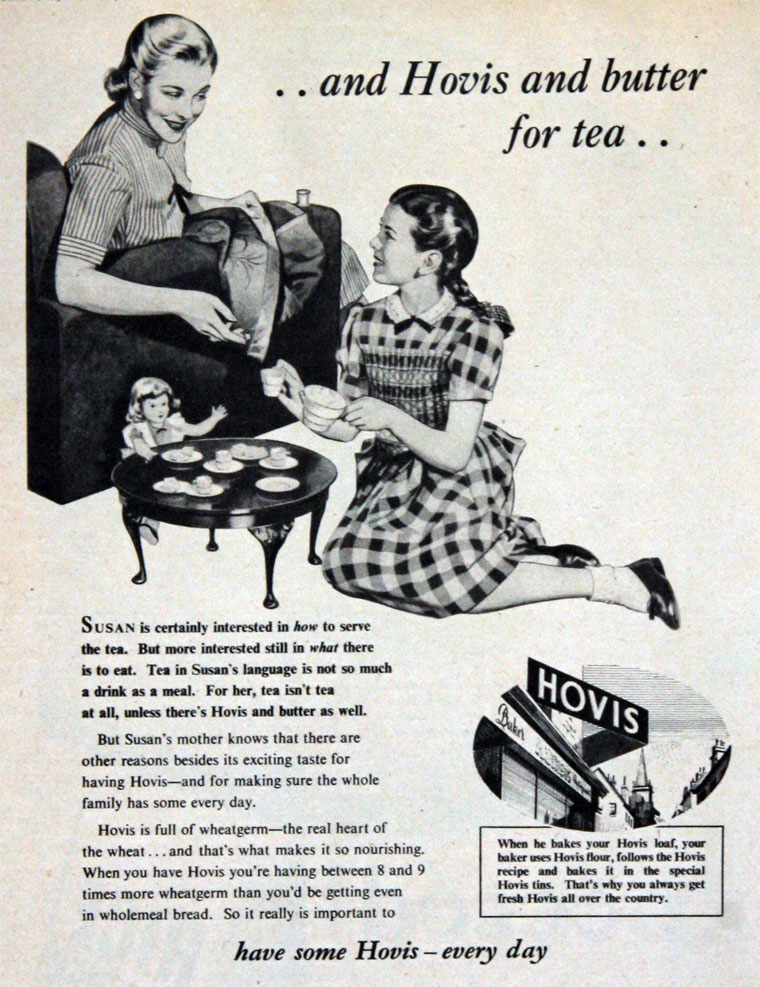 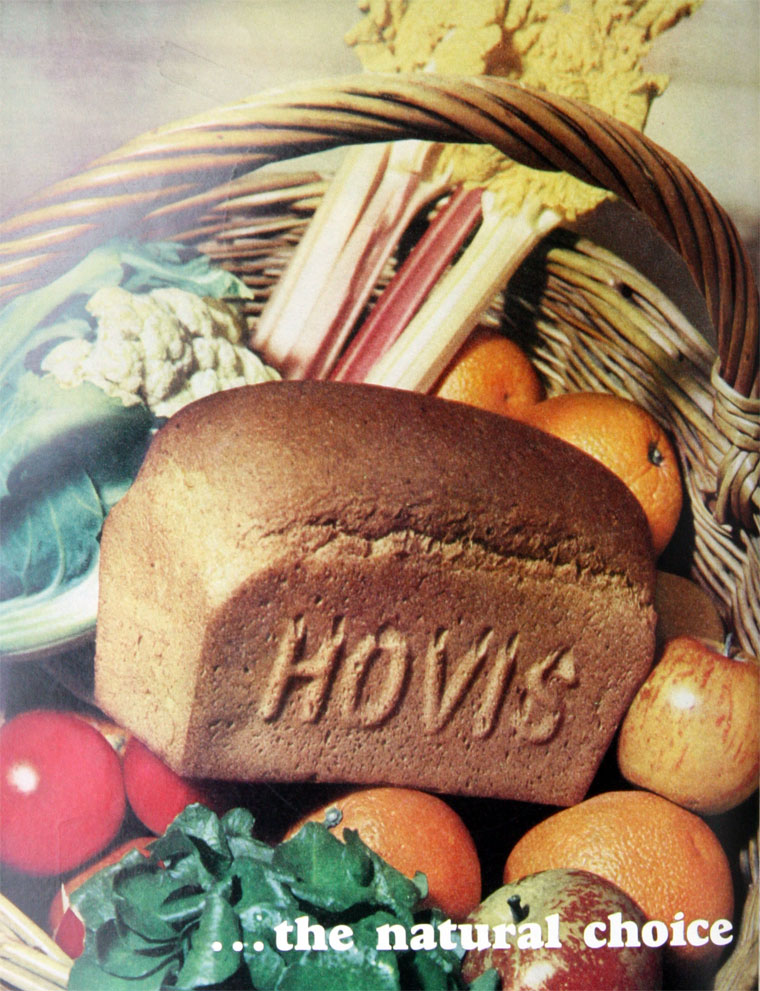 Hovis is a UK brand of flour and bread, now owned by Premier Foods.

1886 Richard "Stoney" Smith developed a method of including the wheatgerm in the bread, something which had traditionally been excluded by bakers. He collaborated with Thomas Fitton, a Macclesfield miller whose company S. Fitton and Sons developed the brand, milled the flour and sold it to other bakers (along with, later, Hovis branded baking tins).

1895 The name "Hovis" was invented by London student Herbert Grimes in a national competition set by S. Fitton and Sons to find a trading name for their bread, which used a patent flour that was rich in wheat germ. Grimes coined the word from the Latin phrase hominis vis – "the strength of man".

1898 The Hovis-Bread Flour Co was registered on 2 February, to acquire the milling and flour business of S. Fitton and Sons[1].

1906 Forty-Sack plant at Trafford park completed and the plant and machinery from Macclesfield is transferred to it.

1912 Distribution of flour to thousands of bakers was an important part of the business. In 1912 a Leyland 2-ton petrol-engined van was purchased and more followed, displacing the original horse-drawn delivery vehicles.

Substantial advertising campaigns and other means of attracting public attention were deployed. Partnering with other products was used, starting with Brooke Bond tea in 1901, Bovril in 1926 and Keiller's marmalade in 1932.

Hovis was an early user of television advertising from 1955.

1955 The bread-making division has been known as British Bakeries since 1955.

In 1957 McDougalls merged with Hovis to form Hovis-McDougall.

1962 Hovis-McDougall was taken over by Ranks Ltd to become part of the new group Ranks Hovis McDougall, later RHM, which also owns the Mothers Pride and Nimble bread brands.

RHM was acquired by Premier Foods.