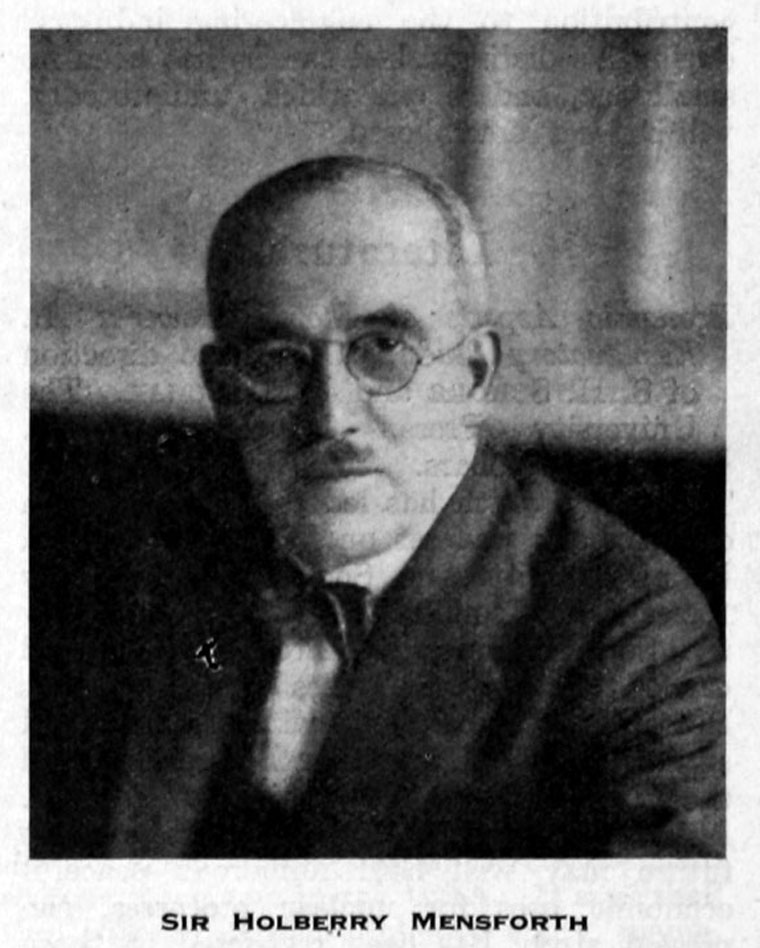 1926 January - "It is announced by the War Office that Sir Holberry Mensforth, Director-General of Factories, is resigning his position at the War Office at the end of February in order that he may take up a private business appointment in the North of England." [1]

"...Sir Holberry was well known in industry as a distinguished engineer and a sound administrator. Until his retirement in 1945 he had been a director of John Brown and Co. Ltd., and its associated companies since 1931, and was for some time chairman of the English Electric Co., Ltd., and Edmundson's Electricity Corporation, Ltd.. Sir Holberry was born at Bradford, Yorkshire, in 1871..." See more

"Sir HOLBERRY MENSFORTH, K.C.B., C.B.E., died on 5th September 1951 at his home in Hazlemere at the age of eighty. He had a distinguished career, starting from small beginnings in Bradford where he was apprenticed to a small firm of general engineers. He was closely associated with the early development of the gas engine and its application to blast furnaces, but he really began his subsequently distinguished career by joining the British Westinghouse Co, now Metropolitan-Vickers, at Trafford Park, Manchester, in 1904. His ability was such that by 1910 he was acting as superintendent and chief engineer of the engine department. He was appointed general manager of works of this large organization in 1917, and was in charge of something like 10,000 staff and work people. In this position he was brought into close touch with government departments, especially the Ministry of Munitions. He became Chairman of the Manchester District Armaments Output Committee and was appointed C.B.E. in 1918. On the termination of hostilities he was asked to undertake the important task of putting the munitions factories on a peace-time basis, and was appointed director-general of factories with headquarters at the War Office. As he had climbed the ladder from the bottom to the top, he was well aware of the mental outlook and peculiarities of men of all grades engaged in the engineering industry. In addition, he was himself a born mechanic, and one favourite story of his was connected with the interchangeability of parts of small arms manufactured at Woolwich Arsenal. He was assured that all parts of service revolvers were absolutely interchangeable and he asked for six revolvers to be sent to his office. He completely dismantled them, mixed them up, and then asked that they should be reassembled, which task proved to be quite impossible without small adjustments being made.

As a result of this demonstration—a good example of his practical methods—he tightened up the manufacture, and by the time he left "identical" parts of small arms were definitely of the same size. He relinquished the appointment in 1926, and was appointed a K.C.B. in recognition of his work. On his return to civil employment, he became managing director of Bolckow Vaughan, which concern he reorganized. In 1931, largely at his instigation, Bolckow, Vaughan and Co were merged with Dorman, Long and Co, and he joined the Board of the combined firm. Shortly afterwards he became chairman of the English Electric Co, again with the task of modernizing their plant and methods, and later of Edmundson's Electricity Corporation, so that he controlled about sixty electricity undertakings throughout Great Britain. In 1931 he also joined the Board of John Brown and Company, Ltd., and associated concerns until he retired in 1945, but he remained a director of the Tredegar Iron and Coal Co until his death.

Sir Holberry had been elected an Associate of the Institution in 1902 and became a Member in 1913. He was also a Member of the Institution of Civil Engineers, and a vice-president of the British Electrical and Allied Manufacturers' Association. He was a man of very strong personality and decided views. He always encouraged merit, particularly in young men, but was not one to suffer fools gladly. He will be long remembered not only for his great achievements in engineering but also for his sense of humour, well displayed by a fund of racy anecdotes in the Yorkshire vernacular dealing with his experiences with men and matters during his long industrial career.