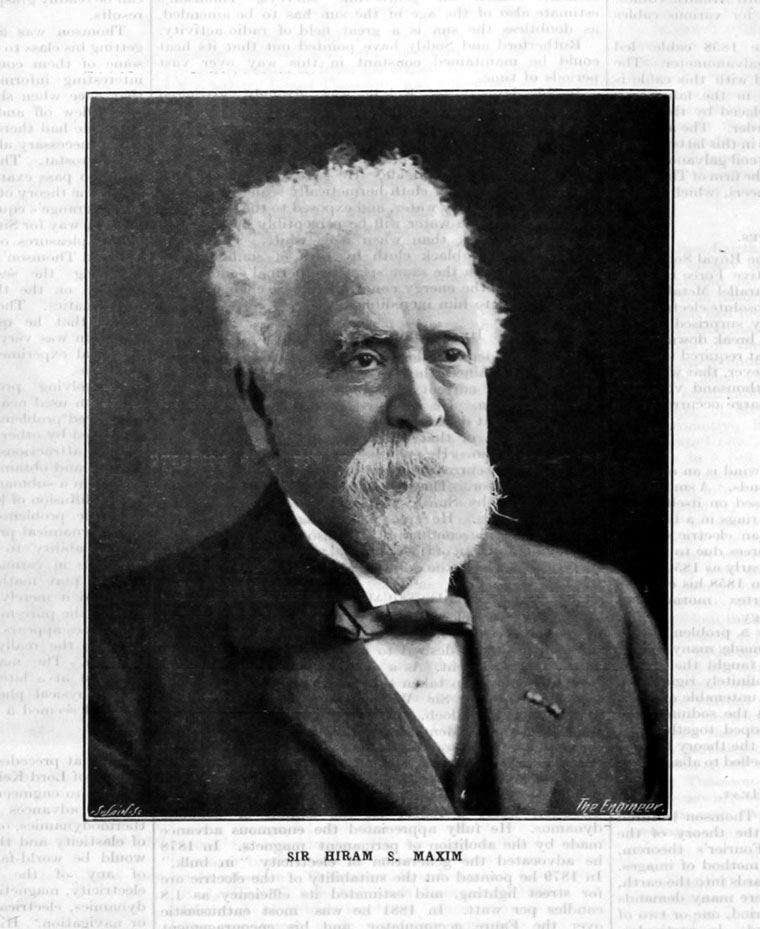 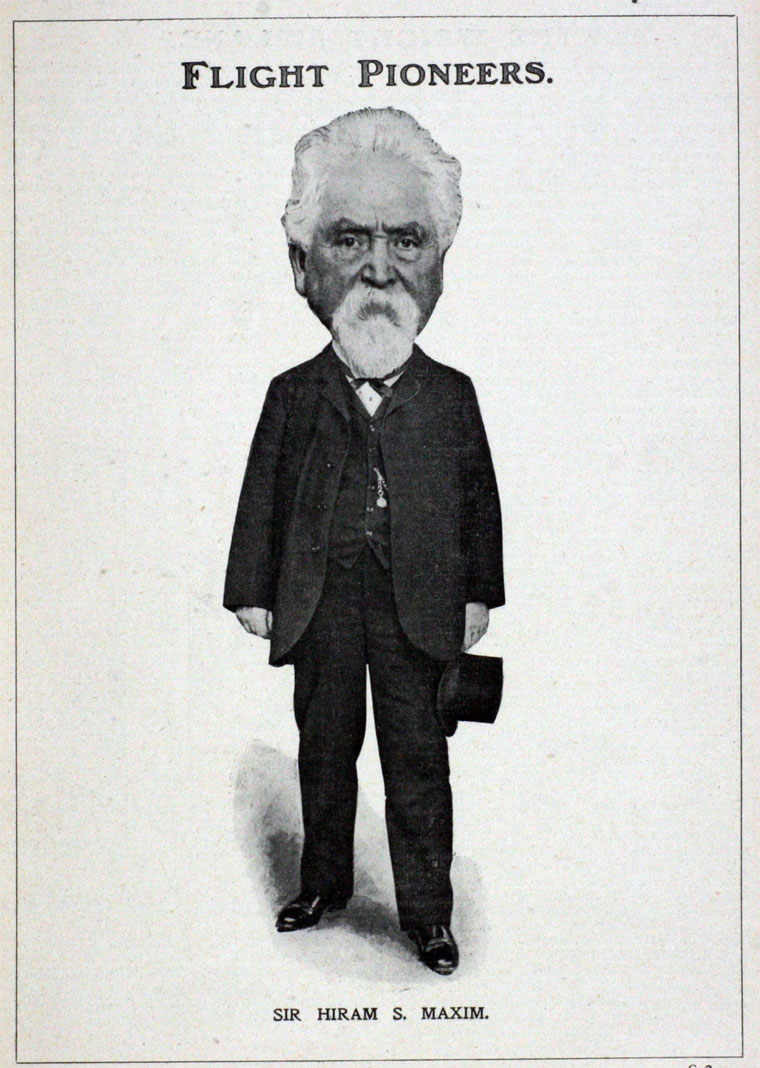 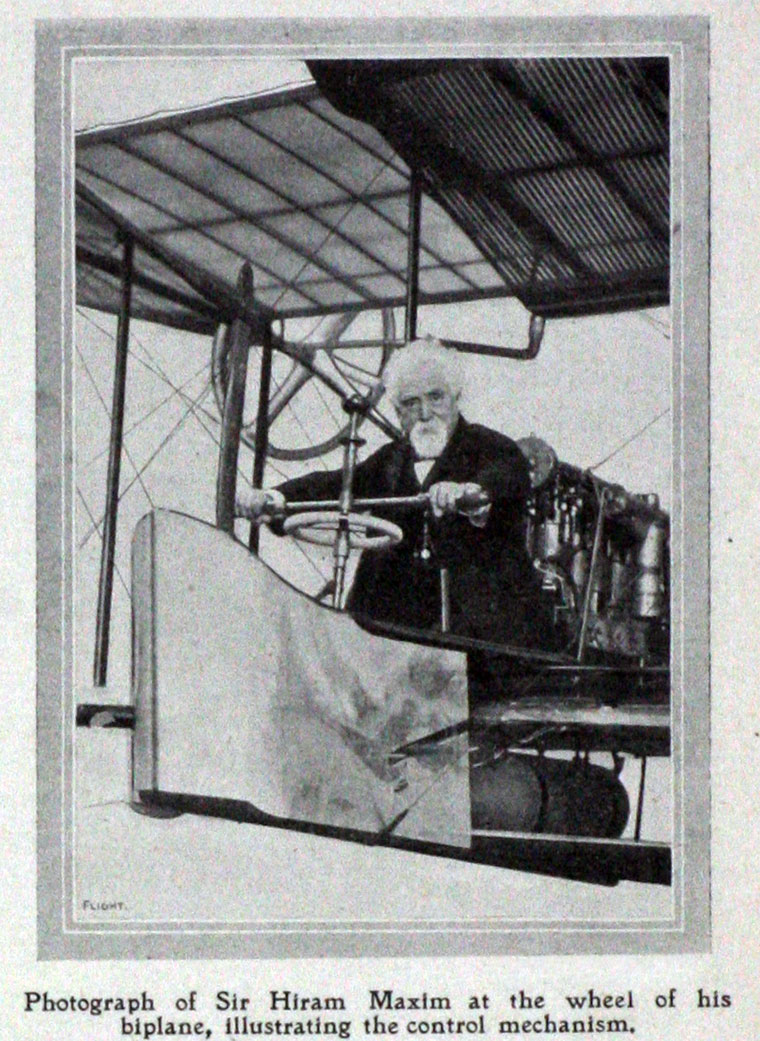 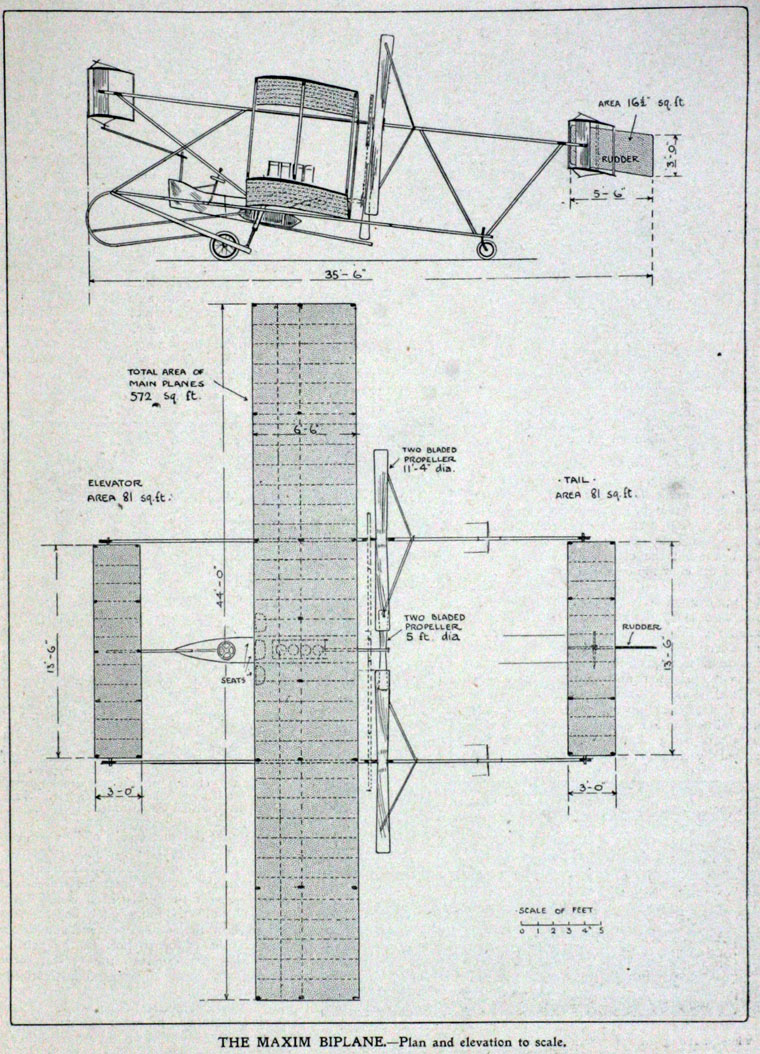 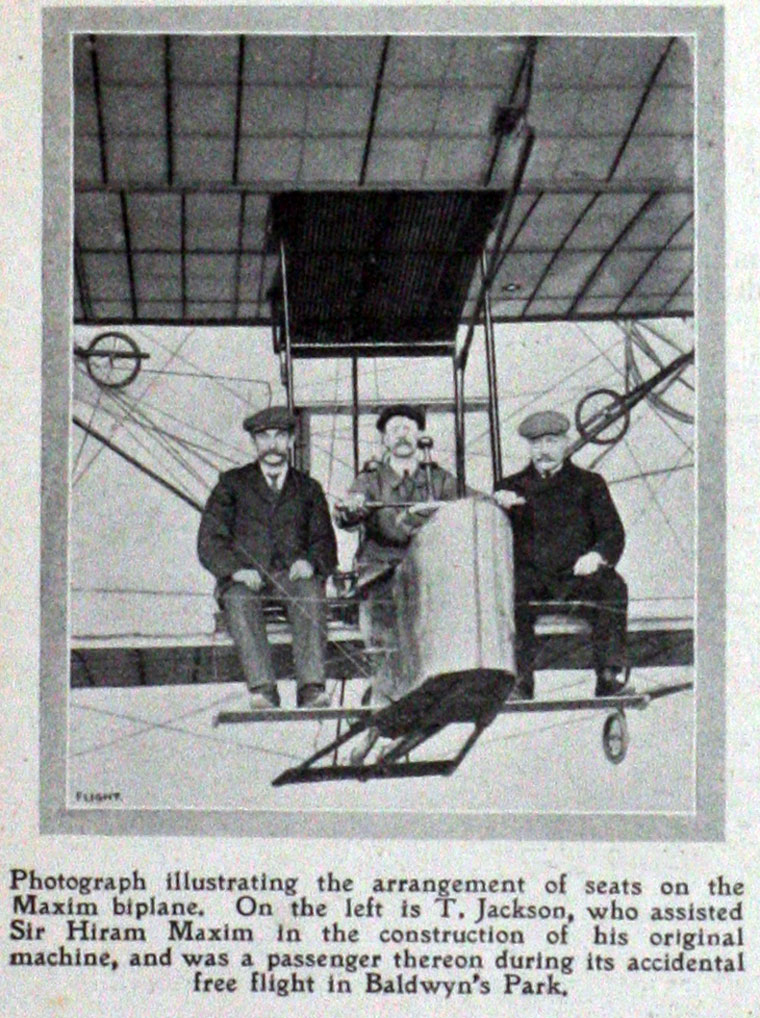 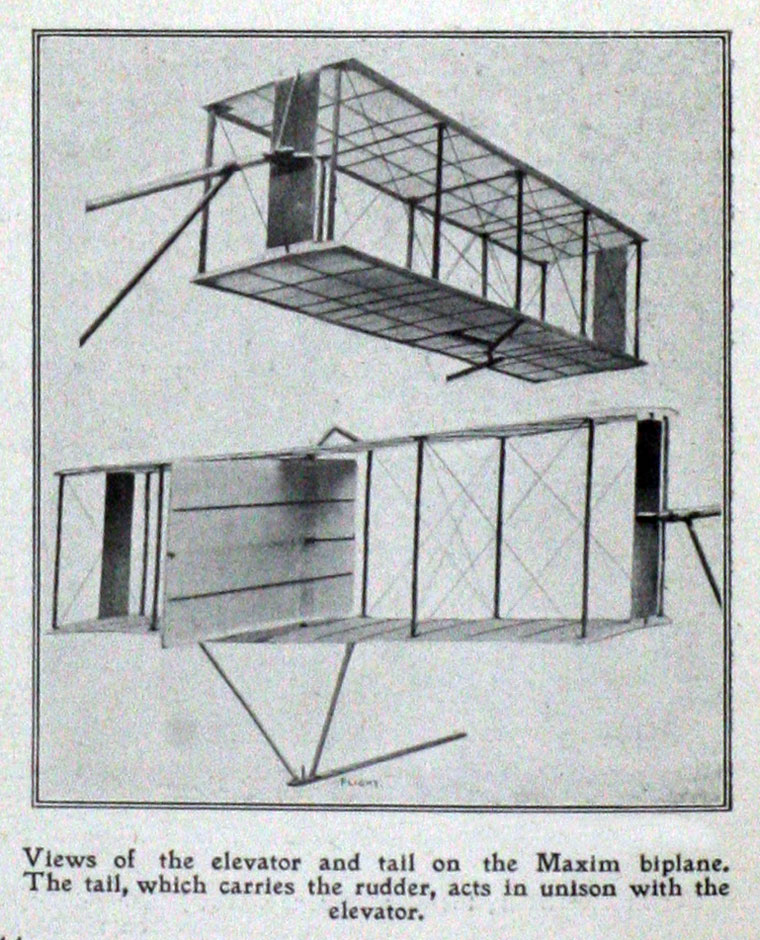 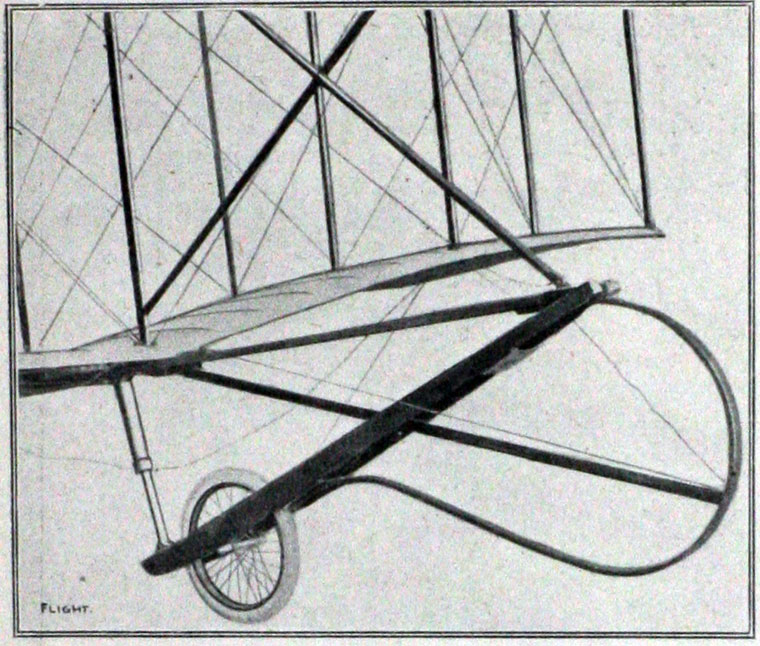 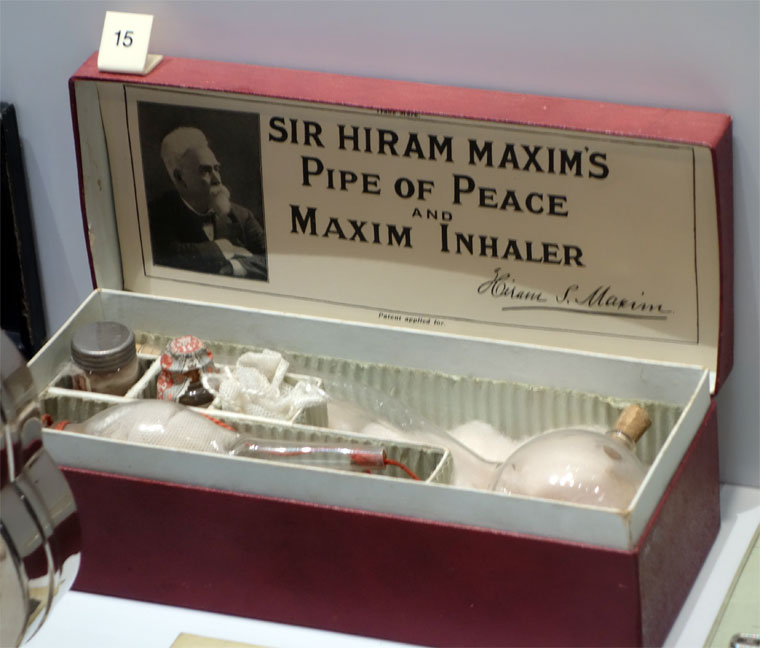 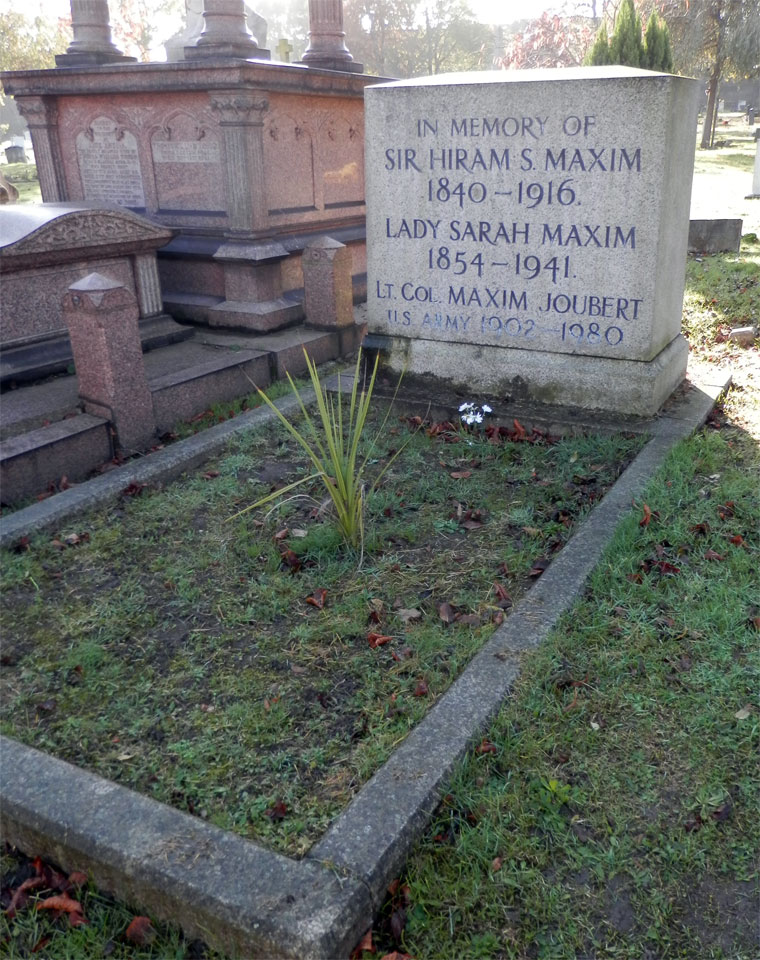 Sir Hiram Stevens Maxim (February 5, 1840 - November 24, 1916) was the inventor of the Maxim Gun in 1881, the first portable, fully automatic machine gun, and the ubiquitous mousetrap. He also experimented in powered flight, but his large aircraft designs were never successful. However, his "Captive Flying Machine" amusement ride became a staple of British fairgrounds.

Maxim is also credited with inventing the common mousetrap and, as a long-time sufferer from bronchitis, he also patented and manufactured the "Pipe of Peace", a menthol amodium inhaler. Over the years he was involved in several patent disputes with Thomas Edison. One of these included the incandescent light bulb.

1840 Hiram Maxim was born on 5 February 1840 at Brockway's Mills, near Sangerville, Maine, USA, the elder of two sons of Isaac Weston Maxim (1814–1883), the other being Hudson Maxim. His wife, Harriet Boston (1815–1901) was the daughter of Levi Stevens of Maine. His father's family were of Huguenot and his mother's of English descent.

1854 Age 14. He became an apprentice coach-builder

1864 Age 24. He took up a job at the machine works of his uncle, Levi Stephens, at Fitchburg, Massachusetts. He subsequently worked as an instrument maker and as a draughtsman.

By 1873 he was senior partner in Maxim and Welch, gas and steam engineers of New York.

1878 became chief engineer to the United States Electric Lighting Company; involved in the development and construction of electricity generating machines and arc and incandescent lamps; this led to his successful development of a method of evenly coating carbon on lamp filaments by "flashing" them in hydrocarbon gas. Dispute with Edison who sued one of his employees. As a result Maxim's invention became public property in England and the United States.

1878 Age 38. Unknown to his wife, he went through an apparent form of marriage with Helen Leighton, aged fifteen: they had one daughter.

1881 Age 41. Helen learned of his marriage and contacted his wife. He agreed to leave Helen but financially support her and her child. Maxim emigrated to England.

1881 His design of "electrical pressure regulator" was displayed at the 1881 Paris Exhibition, and for which he was made a member of the Légion d'Honneur.

Joined in England by Sarah Haynes (1854–1941), the attractive blonde daughter of Charles Haynes of Boston, Massachusetts. She was his secretary and mistress and, after his wife divorced him in early 1888, they married in May 1888.

At some point (date uncertain) the Hiram Maxim Electrical Co was formed.

1893 Introduced a lightweight compound steam engine, two of which were used in his first experimental flying machine. Making extensive use of sheet metal, each engine weighed just 300 lbs, and developed 180 HP on test. Speed 375 rpm. Boiler pressure 300 psi. Cylinders 5.05" and 8" bore, 12" stroke. The airframe was made from steel tubes, which also served to conduct the engines' exhaust to the rear of the aircraft. One of the engines is (or was) displayed in the London Science Museum. The engines were dwarfed by the propellers, which were 17 ft 10" diameter. The watertube boiler was fuelled by naphthaline.[2]

1893 First test of his steam-engine powered aeroplane, weighing about 4 tons and with wing surface of 4000 sq ft[3]

1901 Age 61. Queen Victoria knighted Maxim in 1901 for his inventions, many of which had military applications.

1904 MAXIM, Sir Hiram S., C.E., M.E., has conducted extensive experiments with a view to ascertaining how much power is required to propel an air-ship. Has offered a prize for a reliable air-ship. Has designed the Maxim air-ship. Furnished much valuable data as an indispensable guide to the constructor of air-ships and flying machines. Is also an enthusiastic motorist. [4]

Addressed a "famous meeting" in Whitehall Court when the Royal Automobile Club (RAC) was practically founded, electrifying the audience with "entirely irrelevant, but particularly interesting, historiettes".[5]

1910 Having seen a number of flight experiments in other countries, he designed a water-cooled engine that he thought would be best suited for use in an aircraft, including the design of the carburettor. The aircraft had 3 propellers, including a small one which turned at high speed as a flywheel. He planned to test it using a circular track, with the machine tethered to a central mast, so as to avoid injury to the pilot[6]. In April first pictures of the aircraft appeared in the press[7]. In October, although his biplane was nearing completion, Maxim announced his retirement from aviation; he saw great prospects for the field of flight in future[8]

1916 November 24th. Age 76. He died at Streatham and was buried at West Norwood Cemetery.

His son Hiram Percy Maxim (1869-1936) followed in his father and uncle's footsteps and became a mechanical engineer and weapons designer as well, but he is perhaps best known for his early amateur radio experiments and for founding the American Radio Relay League.

Sir HIRAM STEVENS MAXIM was born at Sangersville, Maine, on 15th February 1840. His ancestors were Huguenots and came to England at the revocation of the Edict of Nantes. Early in the eighteenth century they emigrated to Plymouth, Mass., and a hundred years later went to Maine.

At the age of fourteen his father apprenticed him to a coach-builder, and during this period he was credited with having constructed the first tricycle built in America. Soon after this he worked at his uncle's engineering works at Fitchburg, Mass., and later was at a philosophical instrument maker's, also at a shipbuilder's.

He was for a time with Mr. Oliver P. Drake, a maker of gas-machines at Boston, and while so engaged invented in 1865 a machine for making lighting gas by means of vaporized petroleum. He also perfected an automatic sprinkler, and made improvements in feed-water heaters, steam and vacuum pumps, engine governors, gas-motors, etc.

In 1878 he became chief engineer of the first electric lighting company in the United States, which was founded by Mr. S. D. Schuyler. While so engaged he invented the process of flashing carbon filament lamps in a hydrocarbon vapour, and took out patents for dynamos, lamp carbons, secondary batteries, &c.

In 1881 he went to Europe to represent his firm in Paris, and while there he was made a Chevalier of the Legion d'Honneur, on account of his invention of an electric pressure-regulator. It was at that time he became interested in machine-guns, and was introduced to Mr. Albert Vickers, who at once recognized the value of the invention, which surmounted the difficulty of cartridges jamming in the barrel.

The Maxim Gun Co., with Mr. Vickers as chairman, was founded in 1884, and in 1888 amalgamated with the Nordenfeldt Co. Later, these were absorbed in the Vickers firm, which then became Vickers, Sons, and Maxim. The Maxim gun was adopted by the British Army in 1889, and by the Navy in 1892, and it has been supplied in large quantities to all the military powers of the world.

When he ceased to be a director of the firm on his seventy-first birthday, in 1911, the title was again changed to Vickers Limited. It is reported that, on the suggestion of Lord Wolseley, he invented a smokeless powder, and evolved the Pom-Pom gun.

The question of aviation had interested Maxim from his youth, but he never achieved successful flight. Many experiments were carried out during 1892-4 at Baldwin's Park, Kent, and the most novel features were the engines and boilers; but their weight, together with that of the feed-water and fuel, precluded their success. A Paper on this subject was read by him in 1894 at a Meeting of the British Association. The light motor, to which aeroplanes now owe their success, had not at that time been developed.

One Paper he contributed to this Institution, namely on "The Maxim Automatic Machine-Gun " (Proceedings, 1885, page 167). Honours and decorations were accorded to him in most European countries, and he received the Order of Knighthood in 1901. He had a rare genius for invention, and, while discarding failures, took great pride in his successes, which ranged over a great variety of ideas.

His death took place at Streatham on 24th November 1916, in his seventy-seventh year.

He was elected a Member of this Institution in 1884.

He served an apprenticeship with a firm of coach-builders, and after spending a short time in the machine works of his uncle obtained an appointment as foreman at an instrument factory at Boston, subsequently going to a firm of shipbuilders.

About this time he commenced to take out a number of patents in connection with illumination by gas and for engineering and electrical apparatus. He was one of the first to appreciate the possibilities of electric lighting, and claimed to have invented in 1878 the first carbon glow lamp.

The United States Electric Lighting Company was formed about this time to take over and work his electric lighting patents, which included several systems of arc lighting. Shortly afterwards, in 1881, he turned his attention to firearms and developed the automatic gun with which his name was always associated, and a smokeless powder.

In 1896 the company manufacturing this gun were taken over by Messrs. Vickers, who a year later changed their title to Messrs. Vickers, Sons & Maxim. Sir Hiram was one of the pioneers of mechanical flight in this country and in the early days his experimental machines aroused great interest. The honour of knighthood was conferred on him in 1901.

He was elected a Member of the Institution in 1898.

Maxim built an 8000 lb. flying machine with a wing area of 4000 square feet. Two 180-horsepower steam engines turned propellers 17.8 feet in diameter. It was propelled along a 2000-foot track that was designed to hold the craft down and keep it from actually flying. In a test, the aircraft developed so much lift that it tore loose from the test track and wrecked itself.

Maxim considered the experiment a success and turned his attention elsewhere.