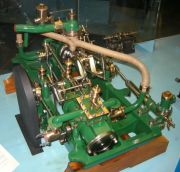 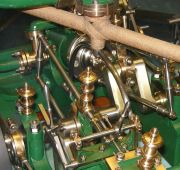 c.1840 Constructed a twin cylinder horizontally-opposed oscillating engine. In 1841 it was installed in the experimental launch 'Firefly' constructed at Banbury. The boiler, probably made by Braithwaite, Milner and Co, produced steam at 60 psi. On trials on the Thames between Blackfriars and Putney, the boat made 9.5 knots with the tide and 6 knots against it, with the engine running at 200 rpm, driving an Ericsson-type propeller through a pair of equal-sized gears. The cylinders were 3" diameter, 6" stroke.[1]. The engine was reversed using gab gear, which can just be seen in the photos. The engine is (or was) on display at the London Science Museum, where the quality of workmanship can (or could) be appreciated.

1842 Henry Warriner of Banbury, became a member of the Institution of Civil Engineers.[2]

1855 Rejoined Maudslay and Field to fit high-pressure engines and boilers to several gunboats for the Admiralty. He remained with the firm until its dissolution in 1901, after which he carried on their unfinished work for the Admiralty until 1903.

HENRY WARRINER was born at Banbury, Oxfordshire, on the 16th August, 1819, and thus his life was practically contemporaneous with the introduction of steam for the propulsion of ships in the British Navy, to the improvement and efficiency of which he so greatly contributed during his lifetime.

The first Admiralty steam vessel was ordered in 1819. In June, 1837, Warriner, who as a boy had a great natural taste for mechanics, became a pupil of Messrs. Braithwaite and Milner of Banbury, a firm of millwrights and engineers; and sustained throughout his career the high reputation of the millwright of those days for thorough and conscientious work. During his pupilage he constructed the high-pressure engines of a small screw-propelled steam-boat, the 'Firefly,' which was almost, if not absolutely, the first screw steam-launch ever constructed.

In 1842 he went to Liverpool to assist Captain Ericsson in carrying out experiments with high-pressure steam in the 'Robert Stockton,' and in the following year he fitted the engines, made by Messrs. Maudslay and Field, in the 'Guiscardo' for the Neapolitan Navy. He then served as second Engineer in that vessel, afterwards becoming Chief Engineer of the 'Ercoli,' until June, 1845, when he left the Neapolitan service.

His next work was at Newcastle in 1846, superintending the construction of locomotives for the Cologne and Minden Railway, and their subsequent erection in Germany.

In September, 1846, he was engaged on the survey of the Coventry and Nuneaton Railway, and on its completion, after a short period in Mr. Robert Stephenson’s office in London, he returned, as Chief Resident Engineer, to construct the railway, which was completed under his supervision in January, 1851.

In March of the same year, he was engaged by Messrs. Ransome and May of Ipswich to design and erect some engines for an oil-mill at Lowestoft.

In January, 1855, Messrs. Maudslay and Field, having obtained orders from the Admiralty for the high-pressure engines and boilers of several gunboats, engaged Warriner’s services to carry out this order. He remained with that firm until its dissolution in 1901, after which he carried on their unfinished work for the Admiralty until 1903. He then retired at the age of 84, still engrossed in his work, having been occupied in almost every development of marine engineering in the Navy and mercantile marine for nearly half a century.

During the period of his professional career marine engineering had passed through many striking changes, in which he took an active and important part. The original Admiralty nominal horse-power was calculated on the basis of 7 lbs. effective pressure per square inch, and the ordinary boiler pressure was 15 Ibs.: this had gradually risen to 300 lbs. The low-pressure 'box' type of boiler had been replaced by high-pressure tubular, or water-tube boilers. The ponderous 'side-lever' marine engine, which was at first the almost universal type, had disappeared, and direct-action engines of various types had replaced it. Piston speed had increased from 200 or 250 to 800 or 1,000 feet per minute, and to 1,200 feet in destroyers. The speed of engines had increased to 130 revolutions per minute in large ships, and to 400 revolutions per minute in destroyers. The low-pressure condensing system had been replaced by high-pressure compound, triple, or quadruple expansion. Closed stoke-holds with forced draught had been adopted; superheaters had been tried to a large extent but again disused; and economizers had in many forms been introduced. The jet had given way to the surface condenser, the paddle-wheel to the screw.

The number of Admiralty ships in which Warriner, acting as outdoor manager of Maudslay’s firm, erected engines and conducted trials, must have been between 250 and 300. To these must be added a large number of orders from the Russian, Prussian, Turkish, Greek, Italian, Brazilian and Chilian Governments, as well as from the 'White Star,' the 'Transatlantic,' the 'Royal Mail' and other steam navigation companies.

During the years 1854-5-6 Maudslay’s firm received orders from the British Admiralty alone for the machinery and boilers of two floating batteries, 75 gun-boats, 9 despatch vessels, and 15 battleships and cruisers. In 1862 the 'Octavia' frigate was the first warship fitted with surface condensers.

In 1871 the 'Goshawk' was selected to test the relative merits of simple and compound expansion. In 1873 the 'Vesuvius' was designed with high-pressure boilers and induced draught.

A few years afterwards the 'Iris' and 'Mercury,' the first navy cruisers built wholly of steel, to the designs of Sir Nathaniel Barnaby, were engined and the trials carried out by Warriner. The results of these trials had a considerable influence on the shape and proportions of propeller blades.

Sir John Durston, with whom Warriner was in constant personal and official association in carrying out the trials of many of the above-mentioned vessels for the Admiralty, has testified to his high character and devotion to duty in the following terms:- 'Not only during the period of his maximum capabilities, but even when he was over 80 years of age he showed remarkable powers of endurance by remaining in the engine-room on the 48 hours’ trial of H.M. ships of the largest class during the whole period of the trials, notwithstanding the efforts of the officials (who were one and all his admiring friends) to induce him to take a proper share of rest, He necessarily took an active part in all the trials-one week in a battleship, and the next in a destroyer. His coolness, courtesy, good temper and consideration for others were remarked by all with whom he came into contact. His constant determination was to give full measure of good work in carrying out the contracts of his firm. No inferior work was passed with his knowledge, and no expense ever stood in his way in remedying any defect arising on trials.'

His kindly sympathies were always with the working classes, and he was greatly respected and esteemed by his workmen. Modest and unassuming in character, he never pushed himself forward; consequently the value of his work was often overlooked and his sterling worth was never fully appreciated. In the public service he would doubtless have risen to eminence.

Of abstemious and frugal habits, he enjoyed excellent health until he was about 80 years old, when he suffered from inflammation of the lungs, brought about by remaining for hours in wet clothes.

After his retirement from active work his health began gradually to fail, and he died on the 18th March, 1909, in the ninetieth year of his age.

Mr. Warriner had been connected with The Institution upwards of 60 years, and was one of its oldest members, having been elected an Associate on the 3rd May, 1842, and subsequently placed in the class of Associate Members.