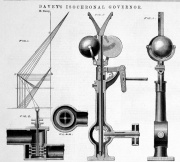 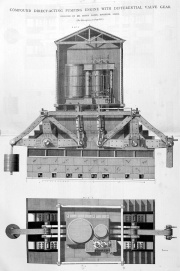 1860-64 Apprentice at Nicholls and Mathews, mining engineers of Tavistock

1864-7 Worked for his father, civil and mining engineer, in Tavistock

Draughtsman at Fox, Walker and Co; locomotive builders in Bristol.

1872 Manager for Messrs Hathorn and Co mechanical engineers of Leeds

1872 Davey described his differential pumping engine to the Society of Engineers.

Abels of Derby asked Davey to join them, but he declined, and they consequently set up a Works in Leeds for him. The differential pumping engine was such a success that more capital was needed to expand and that was provided by Colonel Hathorn, Davey's lifelong friend.[4]

1873 Member of I Mech E; manager of Hathorn, Davis and Campbell, successor to Carrett, Marshall and Co, Sun Foundry, Leeds[5]

1873 Partner in the business which had become Hathorn, Davis, Campbell and Davey

1877 Associate of the Inst of Civil Engineer

1878 After 2 of the partners had retired, the business was Hathorn, Davey and Co

1878 Member of the Inst of Civil Engineers

1890 Henry Davey submitted a design for a Great Tower for London. [9]

He was born at Tavistock and was influenced at an early age by the wonderful development of the steam-engine which had taken place in the mines of Cornwall and Devon. He was apprenticed to a firm of engineers of Tavistock and afterwards commenced to make agricultural implements.

He gave this work up, however, and became a draughtsman at Messrs. Fox, Walker and Company of Bristol, who built some locomotives for the Great Western Railway.

A few years later he took up consulting work in London. Meanwhile Mr. Davey had invented his differential pumping engine, which eventually achieved such great success, and he was commissioned at this time to install pumping plant at Milford Haven. The success of this was such that he was eventually enabled to found the firm of Hathorn, Davey and Company of the Sun Foundry, Leeds, where the pumping engine was rapidly developed.

In 1887 he returned to London to resume practice as a consulting engineer and amongst his productions was the enormous compound Cornish engine, probably the largest ever built, for the Waihi Gold Mining Company of New Zealand.

In 1908 Mr. Davey retired, but he retained until his death his intense love of mechanical things. Besides the differential pumping engine, he made many other inventions, most of which originated in his own private workshop, where he exercised his skill as a craftsman and mechanician.

In 1903 he contributed a Paper to the Institution on "The Newcomen Engine."

Mr. Davey was also a Member of the Institution of Civil Engineers.