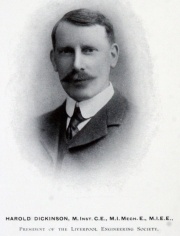 HAROLD DICKINSON was electrical engineer to a number of big undertakings during his career, and since 1913 had been City Electrical Engineer of Liverpool.

He was born in 1867 and educated in Wolverhampton and at Mason College, Birmingham.

He served a three years' pupilage with the Elwell-Parker Company and was assistant electrical engineer at various works during the following few years, being responsible to the manager of works in 1891 for the construction of the Dublin electricity station and the laying of mains.

In 1893 he was appointed engineer and manager of the Yorkshire House to House Electricity Company, which became the Leeds Corporation undertaking in 1898.

This position he held until his appointment in Liverpool. His vigorous policy resulted in very considerable extensions to the Corporation generating plant in Liverpool so that during his control the number of units sold increased from 44 millions per annum to 186 millions.

Soon after his appointment, Mr. Dickinson gained great credit by his success in illuminating the Town Hall on the occasion of a Royal visit to Liverpool. He was the first to install static sub-stations in local works and in the residential parts of the city. He also constructed the first rotary converter automatic stations in this country. Under his supervision, the development of street electric lighting grew rapidly so that during his appointment nearly all the traffic arteries in Liverpool were so lighted.

Mr. Dickinson, who died on 27th November 1927, received the honorary degree of Master of Engineering of Liverpool University in July of that year.

He became an Associate Member of the Institution in 1894 and a Member in 1899.

He was also a Member of the Institutions of Civil and Electrical Engineers.

We regret to record the death of Mr. Harold Dickinson, who had been City Electrical Engineer of Liverpool since 1913 and City Lighting Engineer since 1922. Mr. Dickinson, who was born at Wolverhampton in 1867, was educated at Tettenhall College in that town and at Mason’s College, Birmingham. Before entering the latter institution, he served an engineering apprenticeship under the late Mr. Thomas Parker of Elwell Parker, Limited, and was subsequently appointed to a position with the House-to-House Electric Light Supply Company, now the Brompton and Kensington Electricity Supply Company. He then proceeded to Spain, where he was engaged in superintending the construction of a generating station and mains system in Madrid. Under Messrs. Hammond and Company he was also responsible for the establishment of the Dublin electricity undertaking, becoming engineer and manager of the Leeds electricity supply undertaking for the Yorkshire House-to-House Company in 1893. When this concern was taken over by the Leeds Corporation in 1898, he remained as engineer and manager, until appointed to a similar position at Liverpool in 1913.

Always more interested in the engineering than in the commercial side of electricity supply, Mr. Dickinson was therefore fortunate, both at Leeds and Liverpool, to be associated with considerable extensions to the generating plant. At Leeds, during his management, the plant capacity rose to 35,400 kw., and, at Liverpool, he was responsible for the re-modelling of the two original stations at Lister Drive and the construction of a third. The total plant capacity is now 103,540 kw. He was the first municipal electrical engineer in this country to install automatic rotary sub-stations, while, during his tenure of the office of lighting engineer, the illumination of 100 miles of streets was modernised.

He entered the workshops of Messrs. Elwell-Parker of Wolverhampton in 1883 and, after passing through the various departments, went to Mason's College, Birmingham, to complete his technical training.

In 1888 he obtained an appointment with the House-to-House Co. (now Brompton and Kensington Co.) of London, but soon left them to take up an appointment in Madrid as assistant engineer.

A year later he returned to this country and joined the staff of Messrs. Hammond and Co., supervising the installation of the electricity supply station for Dublin Corporation.

At the end of 1912 he was appointed city electrical engineer of Liverpool, and in March 1922 the City Council also appointed him city lighting engineer. On his appointment as city electrical engineer he at once took steps to increase the capacity of the Lister Drive generating station known as No. 1. The re-modelling of the boiler plant was so satisfactory that turbines of much greater capacity than had been originally planned were installed in the existing building, and the total capacity of the station was raised from 8 400 kW to 35 000 kW. Later, in 1919, two 12 500-kW turbo-alternator sets were installed in No. 2 station, in place of four 2 000-kW turbo- alternator sets, thus increasing the total output of Nos. 1 and 2 stations after reconstruction to 70 000 kW, in place of the original combined capacity of 28 400 kW. This arrangement enabled the Electricity Committee to defer the construction of a new power station for several years.

Commencing in 1913 he installed static substations in the large works in Liverpool and in the residential parts of the city and, later, rotary-convertor automatic substations - the first of their kind in this country - were also installed. Under his supervision the development of street electric lighting proceeded rapidly, and subsequently to his appointment in 1922 as city lighting engineer nearly 100 miles of roads were lighted electrically. His relations with his staff were very friendly, while at the same time he had a reputation for firmness in all his dealings and expected from others the same conscientious care that he himself was prepared to give.

A few months before his death, which took place on the 27th November, 1927, Liverpool University conferred on him the Honorary Degree of Master of Engineering.