Difference between revisions of "Harfords and Bristol Brass and Copper Co" 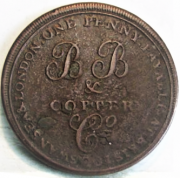 1786 The United Brass Battery, Wire and Copper Company of Bristol came under increasing financial and trading pressure; it put up some of its shares for sale. The management of the company was by a committee of nine, five of whom were members of the Harford family - the company was often referred to as Mark Harford & Bristol Brass Co.

1787 The United Brass Battery, Wire and Copper Company of Bristol was reorganised with little change in ownership and renamed as Harfords and Bristol Brass and Copper Co; it was under the direction of Mark Harford (1738–1798), with another five members of his family and four others as stock holders. The company started to take an interest in copper smelting in South Wales by purchasing part ownership of the works at Upper Forest and running down its copper smelting operations in Bristol.

The Harford's and Bristol Brass and Copper Company involved themselves in a network of, mainly, Quaker copper smelting and copper ore dealing firms in South Wales. The Quaker families of Harford, Champian, Goldney and Darby were all involved in a complex network of partnerships.

By the 1790s, Woodborough battery mill was derelict.

1799 The company's chief rival, Thomas Williams, described it as ‘perhaps the most considerable brass house in all Europe’.

1802 Mark's second son (b. 1768) took over the company. However, it was already declining and was managed largely as a static investment. The company continued to use slow methods to make traditional goods such as brass ingots and wire, copper sheets, and battery-ware pans and kettles. In contrast the Birmingham industry was developing new techniques and products such as gas fittings and machine components.

1820 By this time the company had ceased producing copper at Swansea - this was the end of the company's involvement in the copper smelting business.

From 1833 the company was simply a property owner.

1836 The Harfords & Bristol Brass & Copper Company had, by this time, ended its role as a manufacturing concern. Instead it leased premises to one of the company's partners - Charles Ludlow Walker - at £500 per annum.

1862 The company was sold by the Harford family