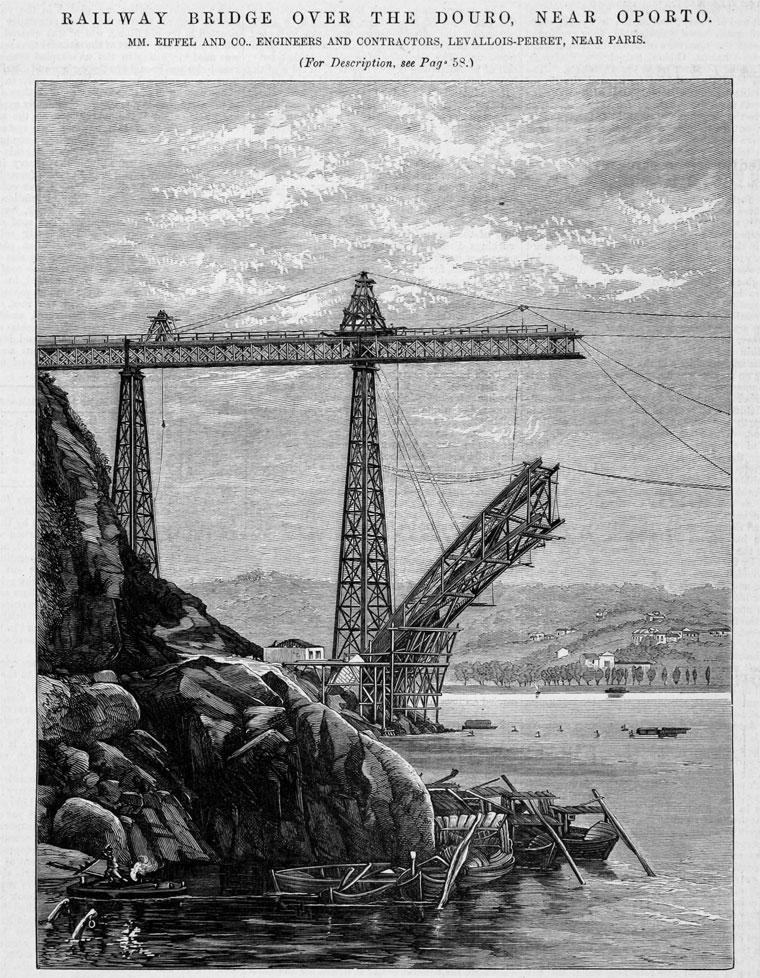 1878. Maria Pia Bridge over The Douro at Oporto (Porto) 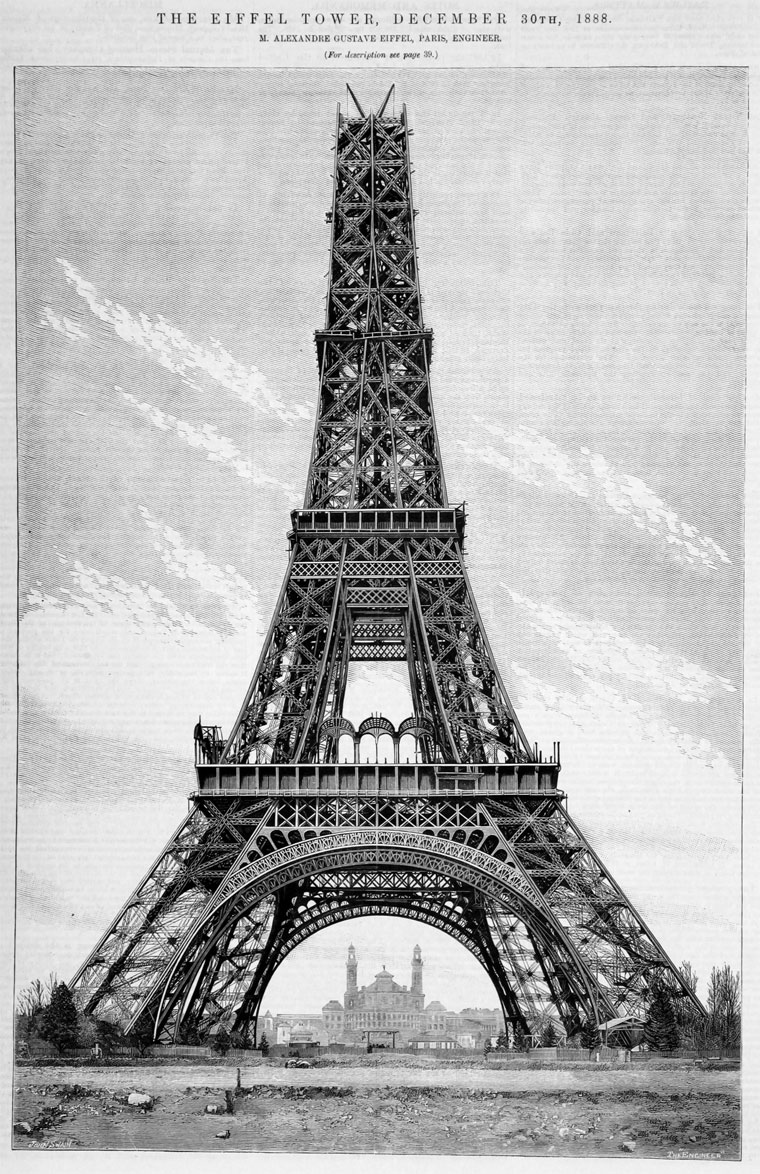 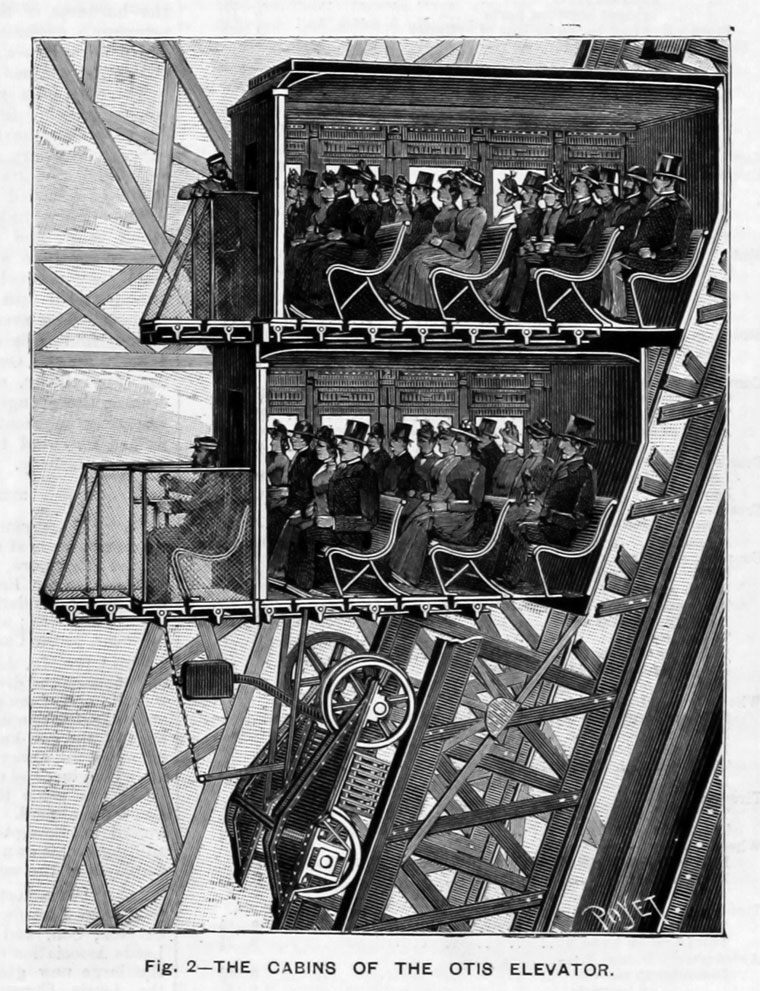 Alexandre Gustave Eiffel (December 15, 1832 - December 27, 1923) was a French structural engineer from the École Centrale Paris, an architect, an entrepreneur and a specialist of metallic structures.

He is acclaimed for designing the world-famous Eiffel Tower, built 1887–1889 for the 1889 Universal Exposition in Paris, France. However other designers include Maurice Koechlin, Émile Nouguier and Stephen Sauvestre. [1]

For an interesting online compendium of Eiffel's life and work, see here[2]. This includes a comprehensive list of his works, arranged by type of structure, by date, and by location.

He received his elementary education in his native city, and at the Lycee Ste. Barbe, Paris. Later he entered the Ecole Centrale des Arts et Metiers, selecting the civil engineering courses.

He completed these in 1855, and, shortly after, in 1857, he became a member of the Societe des Ingenieurs Civils de France, and was therefore one of the oldest lumbers of that Society.

In the following year he became resident engineer on the construction of the iron bridge over the River Garonne at Bordeaux, and this was followed by various engagements on contracting work, including the designing, building, and testing of the structure forming the machinery hall for the Paris International Exhibition of 1867.

Down to the year 1887, when he commenced the construction of the Paris 300-metre tower, M. Eiffel had built iron and steel bridges, etc., having a total weight of over 100,000 tons. The Eiffel Tower, whose weight is 7,800 metric tons, served its purpose during the Exhibition of 1889, and since that period, particularly during the War, it has proved a most invaluable building owing to the advent of wireless telegraph and telephony.

Owing to advanced age he relinquished his active participation in structural engineering, but continued a practical interest in the experimental side of aerodynamics, for which he established a laboratory near the Tower, and later on at Auteuil.

M. Eiffel was President of the French Society of Civil Engineers in 1889, and welcomed the Members of this Institution on their visit to the Eiffel Tower on the occasion of the Summer Meeting in that year. As a result of that visit, the Council nominated M. Eiffel an Honorary Life Member of this Institution.

Also at the Summer Meeting in Paris in 1922 he received the members at the Tower, and honoured the Institution by attending the Banquet in June of that year. His work brought him a number of distinctions. He was an Officer of the Legion of Honour, Officer de 1'Instruction Publique, besides being a Knight and Commander of many foreign orders. He also received the Langley gold medal of the Smithsonian Institution, Washington.

His death took place at his residence in Paris on 28th December 1923, at the age of ninety-one.