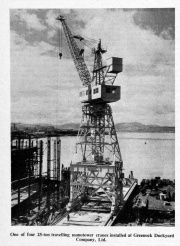 1919 The Greenock Dockyard Company Limited was incorporated as a private company, with capital of £100,000, 'to carry on the Greenock branch of the business of the Greenock and Grangemouth Dockyard Co, ship-builders and ship repairers'.[2]