Grace's Guide is the leading source of historical information on industry and manufacturing in Britain. This web publication contains 137,398 pages of information and 221,179 images on early companies, their products and the people who designed and built them. 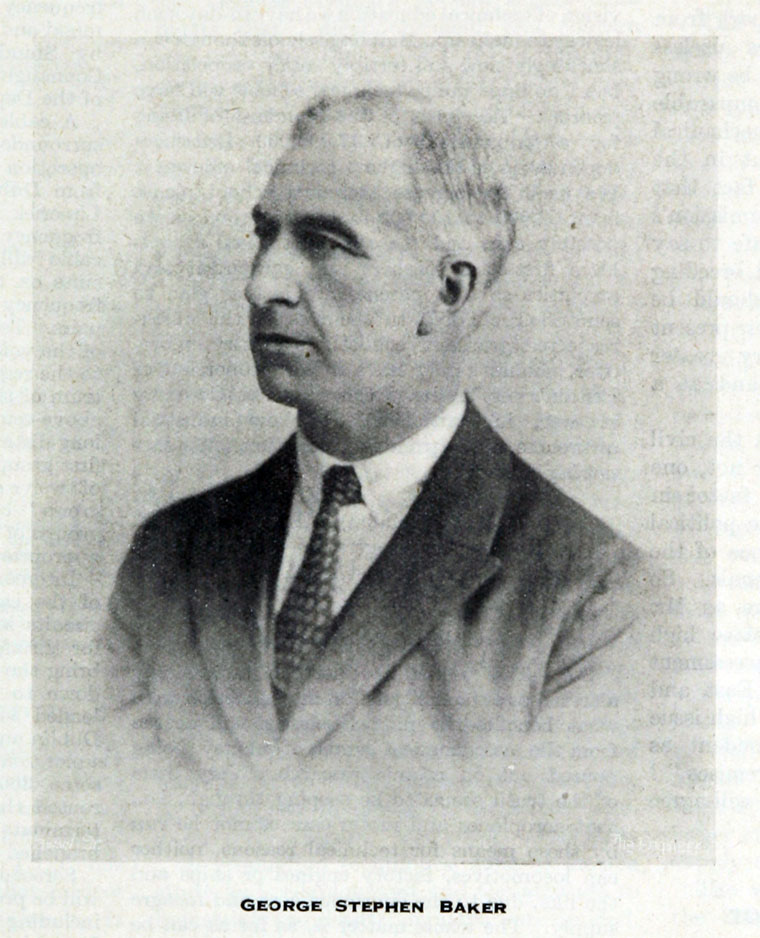 Dr. Baker was born at Rochester in 1877 and entered the Royal Dockyard, Portsmouth, as a shipwright apprentice in 1892. For outstanding ability he was selected by the Admiralty to continue his training at the R.N. Engineering College, Keyham, in 1896, and a year later he went to the R.N. College, Greenwich, as a probationary assistant constructor.

In 1900 he graduated from that College with a first class professional certificate. He joined the Royal Corps of Naval Constructors and was employed for a short time at the Admiralty, Whitehall.

He was then appointed assistant to Mr. R. E. Froude, the Superintendent of the Admiralty Experiment Works at Haslar, and it was during the five years Mr. Baker spent at that establishment that he first practised ships' model experiment work of the kind that later became his life's work.

His next appointment was that of professional secretary to Sir Philip Watts, who was then the Director of Naval Construction. It was while he was with Sir Philip that, in 1908, the Royal Society decided to establish a laboratory for the practical study of hydrodynamics as applied to merchant ships, and through the munificence of the late Sir Alfred Yarrow, a large ship model experiment tank was constructed at the National Physical Laboratory, Teddington.

In March, 1910, Mr. Baker was selected as the man - most competent to supervise the construction of this new laboratory and to superintend its work. The William Froude Laboratory, thus created, commenced its work in July, 1911, when its equipment consisted of one large and one small tank.

In 1932, a second large tank was constructed, and in 1935, as a gift from Sir James Lithgow, a propeller tunnel was added to its equipment.

From 1911 until his retirement under the age limit, Dr. Baker initiated, organised and carried out a very large programme of researches, which involved the making of hundreds of ship models and propellers, and the carrying out of hundreds of thousands of experiments. These researches included fundamental work on skin friction, wake and propeller design. He did pioneer researches into steering, rolling and rough water, which he organised and carried out with great success, and it was as early as 1912 that he initiated the first model experiment researches ever made on seaplanes. This latter research was so successful that the Air Ministry made increasing use of the tanks, until in 1925 a tank specially designed for seaplane work had to be laid down at Farnborough to prevent seaplanes crowding out merchant ship work at Teddington.

In addition to all this work, many thousands of models of particular ships were made and tested and their lines improved before construction commenced. This work was carried out for shipbuilders and shipowners at home and abroad. As greater knowledge was acquired, very large reductions in the fuel required to propel merchant ships followed as a direct consequence of Dr. Baker's skill, amounting in the aggregate to mi11ions of tons per annum. But Dr. Baker was never satisfied with model experiment work alone. He quickly gained the confidence of shipowners and builders, and persuaded them to collaborate with the Laboratory in securing accurate data of ship performances on trial and in service.

Although Dr. Baker did so much fundamental research, yet he gave priority to those researches which would be used in the immediate future, and by keeping in close personal touch with the shipping community and paying close attention to their needs, he so ordered the sequence of researches at the laboratory that his one jump ahead of new developments in shipping, and his advice at the designers' service before it was required. So successful was Dr. Baker in his predictions from model experimental data to ship performance that it has become ordinary practice for the last twenty-five years to "tank test" all new ships of importance. To cope with the resulting great increase of tank experiment work occasioned by Dr. Baker's success, many tanks have been built in Europe, Asia and America, in which his methods are largely followed.

After relinquishing his post as Superintendent in 1942, Dr. Baker remained on the staff of the laboratory until the end of the war, carrying out special researches.

From 1945 until his death, he devoted his time to research for the British Shipbuilding Research Association.

Within a few years of his taking up his duties at the William Froude Laboratory, Dr. Baker became a recognised authority on all matters dealing with the propulsion of ships, and he acted as expert witness in cases of dispute and served on numerous committees, where his technical knowledge and ability invariably commanded respect. During his career at Teddington, Dr. Baker wrote three technical books on ship form, resistance and propulsion, and read forty-three papers of high technical merit before different societies. He was awarded gold medals from each of three technical societies concerned with improvements in ship design.

In 1935 he was made a Doctor of Science of Durham University, and he was also a Vice-President of the Institution of Naval Architects. For his extremely timely and valuable work on urgent problems during the 1914-18 war, he twice received the thanks of the Admiralty and was awarded the O.B.E. He worked unremittingly during those four years, without holiday or even week-ends, ingeniously adapting the equipment of the William Froude Laboratory to the strange and peculiar needs of the Admiralty, brought into existence by new methods of warfare.

Dr. Baker possessed a strong personality and his clear thinking, common sense and foresight inspired confidence in all those who worked with him.

Perhaps his outstanding characteristic was a passion for the truth - a most valuable trait in any experimenter - and hypocrisy in any form received his bluntest condemnation. No trouble was too great and no obstacle too difficult for him to attack with unflagging energy and zeal in pursuit of knowledge. His drive and industry were enormous, and to follow up a full day's work by working far into the night was a commonplace with him, as his hours of work per week had no limit.

He had no sympathy with slackness, yet he was extremely tolerant of genuinely made mistakes by those who worked for him. He was a very kindly man at heart, ever ready to give freely his vigorous help to those in trouble, following it up with good advice or caustic criticism as the occasion warranted. He delighted to delve into the past technical history of ships. Although his time was so fully occupied that he was prevented from indulging in his .early love of sailing small craft, he always followed yacht racing with keen interest and would criticise a failure or applaud a good performance, which his great technical knowledge enabled him to appreciate to the full.

Dr. Baker had the ability to put shy people at their ease, gain their confidence, and extract from them the knowledge he required on very short acquaintance. He enjoyed a good joke and had a puckish sense of humour, which might have led a lesser man into trouble. His greatest joy in life was to carry out successfully a piece of work which most authorities said was impossible of accomplishment. It is true to say that Dr. Baker's life was spent in the service of all who use ships, and his work will live for as long as ships exist; for those who build them will use the results of his researches long after all who knew him in the flesh have passed away.