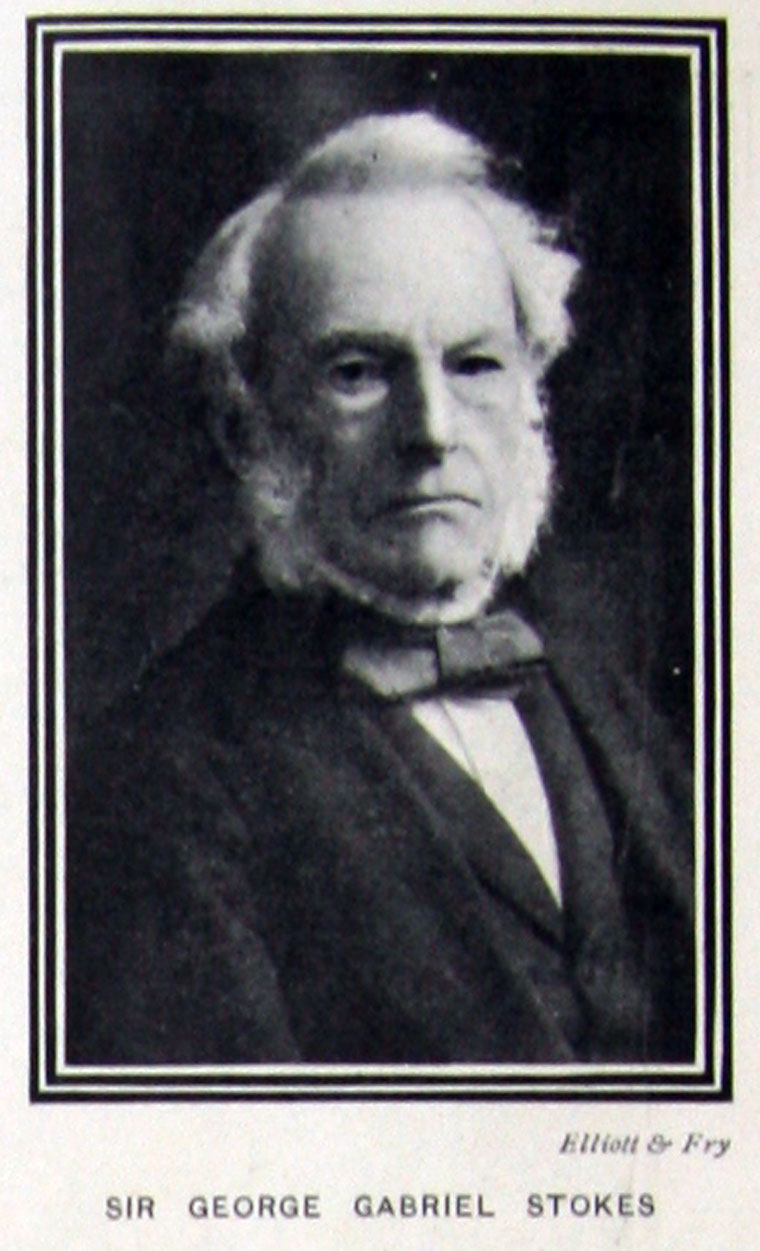 George Gabriel Stokes (1819-1903) was a physicist and mathematician noted for his studies of the behaviour of viscous fluids, and in particular for his law of viscosity, which describes the motion of a solid sphere in a fluid, and for Stokes's theorem, a basic theorem of vector analysis.

1819 George Gabriel Stokes was born on 13 August, in Skreen, County Sligo, Ireland. He was the youngest of eight children born to Irish parents, Gabriel Stokes (1762–1834), rector of Skreen and vicar-general of Killala, and his wife, Elizabeth, daughter of John Haughton, rector of Kilrea, County Londonderry. Stokes's early education was in Skreen and Dublin. He learned reading from his mother, Latin from his father, and mathematics from the parish clerk. He was quick with numbers, reportedly improving on the methods in his arithmetic textbook and solving geometrical problems before reading Euclid.

1832-35 he attended the Revd R. H. Wall's school in Dublin, where his ability impressed the mathematical master. Stokes's brother, William, influenced the next two stages of his education.

1835-37 After Dublin, Stokes spent two years at Bristol College, of which the principal was Joseph Henry Jerrard, who had been at Trinity College, Dublin, and at Cambridge with William. The Bristol curriculum included Greek, Latin, and English literature, but emphasized mathematics, which was organized along the lines of the Cambridge curriculum. In addition to pure mathematics Bristol students studied Newton's Principia, hydrostatics, optics, and physical astronomy—subjects prominent in Cambridge's mathematical tripos. Stokes studied mathematics at Bristol under Francis Newman, brother of Cardinal Newman.

1837 Stokes enrolled at Pembroke College, Cambridge. He found early Victorian Cambridge eminently hospitable in both religion and science. It was a centre of Anglican evangelicalism, with its earnestness of religious purpose and close attention to scripture. He attended church services regularly and although he was to reject particular doctrines prevalent in this environment, he maintained a conservative Anglicanism for the rest of his life.

1841 Stokes graduated BA as senior wrangler and first Smith's prizeman. Pembroke elected him a fellow, and he was based in Cambridge for the rest of his life, most of the time as Lucasian professor of mathematics.

1842 He published his first paper on fluid motion.

1843 He published a paper on the steady motion of incompressible fluids.

1845 His work on the friction of fluids in motion and the equilibrium and motion of elastic solids was published.

For a decade or so after taking his degree he published paper after paper reflecting intense and original research, mainly in those areas of physics that had dominated his studies at Bristol and Cambridge. He was steered towards his first research topic, hydrodynamics, and Stokes's results soon perturbed Cambridge's Plumian professor, James Challis.

1849 Stokes was appointed Lucasian Professor of Mathematics at Cambridge University. A pioneer in the science of geodesy (the study of the size and shape of the Earth and its gravitational field), he published a paper on the variation of gravity at the surface of the Earth.

He worked on fluorescence (he originated the term), used it in the study of ultraviolet light, and demonstrated that quartz, unlike ordinary glass, is transparent to ultraviolet light. He was an advocate of the wave theory of light and the concept of an ether in which the waves of light supposedly must travel. In an attempt to explain the apparently contradictory properties of the ether, he suggested that it behaved much like wax and that it was rigid but would flow under a slow but steady force, such as that applied by the orbiting planets. In addition, he hypothesized that the planets dragged part of the ether along with them by virtue of friction.

1851 Stokes was elected to the Royal Society (London).

1854 He became secretary of the Royal Society and held the post for 30 years, until he was elected president. He was first man since Sir Isaac Newton to hold the three positions of Lucasian Professor, Member of Parliament, and then president of the Royal Society. Stokes suggested that the Fraunhofer lines might be caused by atoms in the outer layers of the Sun that absorb light of certain wavelengths. He failed to pursue the possibility, however, and later disclaimed any prior discovery when the German physicist Gustav R. Kirchhoff published his explanation of the Fraunhofer lines.

Entwined with his role as a public scientist, Stokes's second period of research began in the mid-1850s and, though less far reaching than the first, was still of considerable importance.

Stokes's mathematical and physical papers were published in five volumes; the first three under his own editorship in 1880, 1883, and 1901 and the last two under that of Sir Joseph Larmor. Stokes also wrote On Light (1887) and Natural Theology (1891).

1889 Stokes was created a baronet.

1928 The 'stokes', a unit of kinematic viscosity in the centimetre-gram-second system, was named after him.

In 1835 he was removed to Bristol College, of which Dr. Jerrard was principal.

In 1837 he entered Pembroke College, Cambridge, of which he was the Master when he died ; graduated in 1841 (a year before Cayley) as Senior Wrangler and First Smith's Prizeman ; became a Fellow of his College in :the same year ; and in 1849 was elected Lucasian Professor of Mathematics in succession to Joshua King, Babbage, and Airy; and to Newton also in the same chair. He was elected a Fellow of the Royal Society in 1851, and in the following year was awarded the Rumford medal in recognition of investigations on the refrangibility of light, published in the Philosophical Transactions for 1852. He was appointed one of the Secretaries of the Royal Society in 1854, and after numerous contributions to the Transactions of that and other learned societies, he became President of the Royal Society in 1886, a post which he held until 1890.. . . [more]