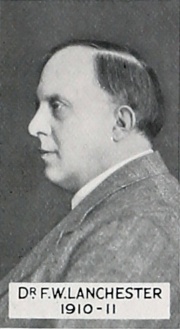 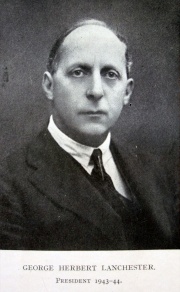 Frederick William Lanchester, Hon FRAeS (1868-1946) of the Lanchester Engine Co and the Lanchester Motor Co was an English polymath and engineer who made important contributions to automotive engineering, aerodynamics and co-invented the field of operations research. He was also a pioneer British motor car builder, a hobby he eventually turned into a successful car company, and is considered one of the "big three" English car engineers, the others being Harry Ricardo and Frederick Henry Royce.

1868 October 23rd. Born at Lewisham the son of Henry Jones Lanchester, an Architect and his wife Octavia Ward. FW was the fourth to be born in a family of three girls and six boys (one of whom died after a few days)

1870 The family moved to 1 St. John's Terrace, Hove (later re-named as 48 Church Street) when HJL was involved in the laying out of the Stanford estate.

1883 Autumn. He went to the Hartley Institution (later the University Collage) in Southampton

1888 He started work in a Patent office and at this time he took out his first patent for 'hatching, shading and geometrical design'.

1893 He set up his own workshop and did contract work for Forward and G. Kynoch and Co

1893 He designed and built his first engine (a vertical single cylinder) which was fitted to a flat bottomed boat designed by his brothers. The boat was built at his home at St. Bernards Road, Oulton and launched at Salter's slipway in Oxford in 1894

1895 Summer. Moved into rooms in a farmhouse at Cobley Hill, Alvechurch and was there for two years

1895 Built one of the first petrol cars in England, a single-cylinder 5 hp internal combustion engine with chain drive.

1896 February. First test drive of the car with brother George

1898 Built their second car, the 8 hp 'Gold Medal' three-seat phaeton. The first long test run was 68 miles from Edgbaston to Pershore, Evesham and back to Birmingham and had reached a speed of 28 mph

1899 Built their second river launch with the hull made at Bathurst's Yard, Tewkesbury. This later became the regular transport of their backer James Whitfield

Three of the Lanchester brothers (the others being Frank Lanchester and George Herbert Lanchester‎) started the Lanchester Engine Co in 1900 to sell his designs on the market. Many features of the original were retained in their production models, including the mid-mounted engine between the front seat that led to the lack of a "hood" area. The transmission was based on his own compound epicyclical gearing, giving three forward speeds, and drove the rear axle through his own Lanchester worm gearing. The transmission also included a system similar to modern disk brakes that clamped the clutch disk for braking, rather than using a separate system as in most cars.

Lanchester continued to make changes to the design. A water-cooled engine appeared in 1902, and a larger 18 hp model in 1904. The same year he also introduced a slightly larger 20 hp four cylinder design, for which, in order to get the smooth running he demanded, he had to invent the system of twin balancing shafts that are used today on modern designs. A 38 hp six was introduced in 1907, requiring another invention for smooth running, the crankshaft damper.

After the failure of the Lanchester Engine Co, a new company Lanchester Motor Co was formed which took over its business. Frederick remained with the company until 1909 when he became a part-time consultant, finally severing all links in 1914.

Whilst working with the Lanchester Motor Company he also experimented with fuel injection, turbochargers, added steering wheels in 1907 and invented the accelerator pedal, which previously would not turn off if the operator had problems. He invented (or was the first to use) detachable wire wheels, bearings that were pressure-fed with oil, stamped steel pistons, piston rings, hollow connecting rods, the torsional vibration damper, and the harmonic balancer.

In 1909 Lanchester took employment with Daimler as a consultant and technical adviser. His work for it, and later for its parent company, BSA, over the next twenty years, included the design of his world-famous ‘crankshaft vibration damper’ and his ‘harmonic balancer’, both of which are still in use in various forms.

Lanchester's retained a deep interest in mechanical flight, which he had been studying since the early 1890s. Lanchester developed a model for the vortices that occur behind wings during flight, which included the first full description of lift and drag, although the formulation was somewhat complex and would have to wait for Ludwig Prandtl's version before becoming generally useful. He then turned his attention to aircraft stability, aerodonetics, developing Lanchester's phugoid theory which contained a description of oscillations and stalls. During this work he outlined the basic layout almost all aircraft have used since then.

He published Aerial Flight in 1907-08 and was invited to join Prime Minister Asquith's advisory committee for aeronautics on its formation in 1909.

1909 Became a consulting engineer to the Daimler company

From 1909 to 1911, he was a consultant to the White and Thompson Co, where he gave their biplane many innovative features such as aluminium-clad wings and triangular bracing with tubular steel struts. An experimental aircraft co-designed by Lanchester did not survive its trial flight in 1911, and he abandoned the practical side of aviation.

He foresaw the major contribution that aircraft could play in wartime. His brother later said that ‘The rapid evolution of British aircraft during the First World War was largely due to his energy and foresight’.

During World War I he was particularly interested in predicting the outcome of aerial battles.

In 1916 he published Aircraft in Warfare: The Dawn of the Fourth Arm, which included a description of a series of differential equations that are today known as Lanchester's Power Laws. The Laws described how two forces would erode each other in combat, and demonstrated that the ability of modern weapons to operate at long range dramatically changed the nature of combat -- a force that was twice as large had been twice as powerful in the past, but now it was four times, the square of the quotient.

1919 Married Dorothea, daughter of Thomas Cooper, vicar of St Peter's Church at Field Broughton near Windermere; they had no children.

1931 the company was acquired by Daimler, and Lanchesters became merely re-clothed Daimlers.

FREDERICK WILLIAM LANCHESTER, who died on 8th March 1946, in his seventy-eighth year, was a man of a remarkable personality, of wide interests, and varied accomplishments in the fields of science and the arts, though it is probable that he is, and will in the future be, best known for his work in connection with the motor car and with flight. With the true instinct of the pioneer his acute mentality enabled him to see far ahead of his contemporaries, and so far in advance of his time were some of his views that they gained little acceptance for many years after their enunciation. It might aptly be said of him that he did bestride the narrow world like a Colossus, and petty men walked under his huge legs and peeped about to find themselves dishonourable graves.

In aeronautics his was the voice of one crying in the wilderness, in days when - little to our credit - scientific achievements native to this country were at a discount; and it was not until some twenty years had lapsed and work abroad on the same subject began to attract notice, that it was at all generally realized that Lanchester had long previously developed the modern conception of lift and drag upon which aeroplane design is now based. Like Joule, his first contributions were received with the "silence of disapproval". The Physical Society rejected a paper on the subject of Lanchester's theory in 1897, but undeterred he set to work on and published in 1907 and 1908, respectively, his two classic volumes on "Aerial Flight:, one dealing with "Aerodynamics" and the other entitled Aerodonetics". Even this great effort failed to convince the experts of the day, save for a few exceptions, and it required a further ten years before Lanchester was at all widely admitted to the honourable place which was his due in this particular field. While aeroplanes were in fact still contrivances of sticks and strings, mostly the product of enthusiasm rather than "design" in any proper sense of the word, Lanchester was thinking, and trying to induce others to think, in terms of aerofoils, and of streamline forms such as those which have only recently become familiar.

In motor car development Lanchester's work more rapidly brought him the credit to which he was entitled. Here was something tangible which could be more readily appreciated than the concepts which he developed in the field of aeronautics. Even in his first attempts in this sphere Lanchester broke new ground and his sound engineering mind produced developments which have persisted to this day, while his contemporaries were chiefly concerned with adaptations. For the first ten years in this field Lanchester introduced in rapid succession numbers of features still regarded as the best practice, and probably no other single person in this country has been responsible for so many pioneer inventions of value in this particular branch of engineering.

It would be impossible in the space available to enumerate Lanchester's inventions or to enlarge at all adequately on the wide range of his engineering and scientific work; nor in fact is this necessary as much of the story is already on record in the PROCEEDINGS of the Institution, more especially in the report of the special meeting at which he was awarded the James Watt International Medal in 1945;* where, among other matter, will be found an appreciation by Professor Sir Melvin Jones, C.B.E., F.R.S., setting forth the modern view of Lanchester's aeronautical work. The James Watt Medal, the highest award in the field of mechanical engineering, was only one of many honours which came to Lanchester in his later years. He was, for instance, the third recipient of the Ewing Medal; of the highest aeronautical award in the form of the Daniel Guggenheim Medal; of the Royal Aeronautical Society's Gold Medal, etc.

From this necessarily brief summary it will be realized that Lanchester was a giant among men and of a mentality and genius of quite an exceptional order. As not infrequently happens in such cases, at times he was impatient of slower thinkers and caustic in criticism, but he was frank and warm in his friendships and much enjoyed a bit of humour. He was no mean musician, bringing his scientific mind to bear upon the art, and it may surprise many to learn that he was a gifted writer of verse, some of his work, published under the nom de plume of Paul Netherton Herries, revealing real inspiration.