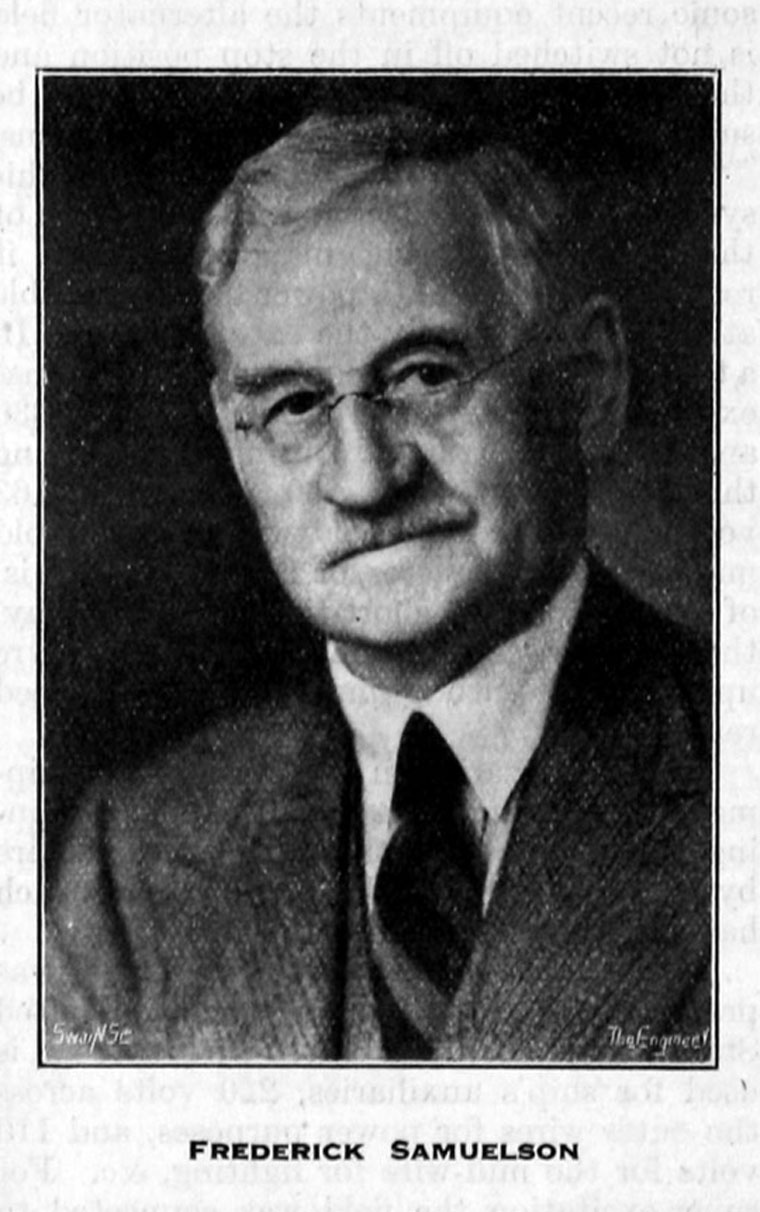 "FREDERICK SAMUELSON, whose death occurred at Rugby on 21st January 1946, at the age of 79, was an engineer of outstanding ability, whose work as chief turbine engineer to the British Thomson-Houston Company for thirty-six years gained him a wide reputation. One of the earliest pioneers in the development of the steam turbine in this country, he saw it grow from the Curtis type two-stage velocity compounded vertical machine of 500 kW. to the 75,000 kW. multi-cylinder horizontal turbo-alternator. To this striking advance in design and power Mr. Samuelson's creative faculty contributed in no small degree.

He was born in Sweden and received his general education in the state school at Hedemora and his technical training at the Stockholm Technical College, where he graduated in mechanical engineering in 1887. His apprenticeship was served in the Domnarfvet Steel Works and the Atlas Engineering Works. He then won a travelling scholarship, and, coming to England in 1887, was engaged for Sir Hiram Maxim on work in connexion with the Maxim gun and the steam-driven flying machine. A year later he was transferred to Messrs. Vickers, Ltd., at Erith, as engineer of design where he remained until 1897, when he joined the staff of the British Thomson-Houston Company as chief draughtsman.

He was placed in charge of the turbine department from its inception in 1903 until 1939. Of late years he was closely concerned with the development of the Whittle gas turbine. Mr. Samuelson's valuable services to the Institution, of which he had been a Member since 1915, will be remembered with gratitude. He served as a Member of Council from 1930 to 1935, was vice-chairman of the Midland Branch during 1928 and 1929, and chairman in 1930. He was an original member of the Steam Nozzles Research Committee. In addition he was a Member of the Institution of Electrical Engineers. From 1926 to 1928 he occupied the chair of the Swedish Engineers Society in London, and in 1932 H.M. the King of Sweden conferred upon him the Royal Order of Nordstiernan.

In 1921 Mr. Samuelson presented a paper on "High Steam Pressure and other Means of increasing Economy of Steam Engines", and in 1930 he delivered an address on "Use of Mercury for Power Production".

"...Mr. Samuelson was born at Hedemora Dalarne, Sweden, on April 2nd, 1866. He decided to become an engineer, and after practical training in the shops he attended a three years' course at the Technical School in Stockholm. On the completion of this course he gained scholarships which enabled him to visit England in 1887. For a year he worked with the late Sir Hiram Maxim, who was then busy with his quick-firing machine gun and his flying machine, and was also constructing a cordite engine. In 1889, Samuelson joined the firm of Vickers Ltd. and was employed at the Erith works until 1897. In the May of that year he was appointed chief draughtsman of the British Thomson-Houston Company's works at Rugby, and in 1903 he became head of the turbine department . In 1934 he was elected a director of the company, having had the charge of the turbine department for 31 years. In 1939 he relinquished that appointment and his directorship and was employed in a consultative capacity until March 31st, 1941, when he retired.. Read More, p 109