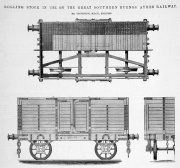 FREDERICK HENRY TREVITHICK, born on the 6th of November, 1843, was one of the well-known family of engineers of that name. His father, F. H. Trevithick, was Locomotive Superintendent of the Grand Trunk Railway of Canada; his uncle, Francis Trevithick, held a similar position at Crewe; and his grandfather was Richard Trevithick, the introducer of the high-pressure steam-engine and the first to design and successfully work a locomotive on any line of railway.

When eighteen years of age, the subject of this notice commenced his professional education at the engineering works at Hayle, Cornwall, founded by his great-grandfather, John Harvey.

On the expiration of his pupilage in 1862, he entered the drawing-office of the Locomotive Department of the London and North Western Railway at Crewe.

Two years later, although only twenty-two, he was placed in entire charge of the railway between Frankfort and Homburg. That post, however, he resigned in 1866, to accept the more important appointment of Superintendent and Manager of the Danish Railways, which position he held until the lines were taken over by the State two years later.

After travelling for a short time in the United States, Mr. Trevithick was engaged from 1869 to 1871 in the Locomotive Department of the Central Pacific Railway at Sacramento, California.

In the latter year he returned to England and was occupied for a time on independent construction work at Cardiff.

In 1874 he was appointed Engineer and Manager of the Isle of Man Railway, but after holding that post for about two years he went to India as Locomotive Superintendent of the Madras Railway. With the exception of twelve months’ leave in England in 1884 and eighteen months in 1889-00, Mr. Trevithick carried out the arduous duties of this appointment until April, 1891, when continuous ill-health compelled him to resign.

He had in the previous year acted during the absence of the late F. B. Hanna as Agent and General Manager. Unfortunately change and rest did not produce any permanent benefit and he died at Exeter from asthma and pulmonary consumption on the 19th of September, 1893, at the comparatively early age of forty-nine.

Mr. Trevithick was an exceptionally clever draughtsman and was never so happy as when solving some difficult or intricate problem in mechanical design. Exceedingly fair and upright in his dealings, he was much liked by all his men, and though his constant ill-health and retiring disposition prevented his mixing so much with those around him as he might under other circumstances have done, he was untiring in his efforts for the general welfare of his subordinates. He tool a keen interest in volunteering and to his efforts is due the formation and present state of efficiency of the corps of Madras Railway Volunteers, of which he was Commandant from its inauguration to the time of his retirement from the service.

Mr. Trevithick was also a Fellow, and examiner in engineering, of the University of Madras. Possessed of much general information, he was most interesting in society when his natural reserve allowed him to do himself justice. He suffered acutely from chronic asthma, an affliction he bore with an uncomplaining courage which was the wonder and admiration of all who knew the pain and weariness it entailed.

On retiring from the Madras Railway Company he received a bonus in consideration of the exceptional services he had rendered in connection with the redesign and construction of the greater part of the wagon and carriage-stock, nearly the whole of which was rebuilt at the Perambore works under his regime ; and was presented with a farewell address and a handsome silver bowl by the employees of the Locomotive Department, and with a silver casket containing an address by the Bladras Railway Volunteers. Speaking at the last half-yearly general meeting in London of the Madras Railway Company, the Chairman referred to Mr. Trevithick as 'our late valuable and accomplished locomotive superintendent, who served us in that capacity very ably and faithfully for a period of sixteen years.'

Mr. Trevithick married the eldest daughter of Captain Alexander Goldie, R.N., of Douglas, Isle of Man, who survives him. He was elected a Member of the Institution on the 19th of May, 1885.