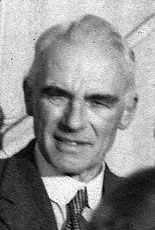 1872 November 5th. Born the son of William Brackett and his wife Catherine Newbegin

THROUGHOUT the whole of his long career as a mechanical engineer, Mr. Francis Whitwell Brackett worked in Colchester, and his death, which occurred there on April 30th, is deeply regretted.

Until recently, Mr. Brackett was chairman and managing director of F. W. Brackett and Co., Ltd., which firm he founded in 1899.

F. W. Brackett was born in 1872 and spent his early years in the engineering industry in the works of A. G. Mumford, Ltd., of Colchester, the principal business of the firm at that time being the manufacture of pumps for marine use.

In 1899, Mr. Brackett started his own business as a pump manufacturer.

As he himself recalled, on the occasion of his firm's jubilee, his employees at the beginning consisted of a fitter, a turner and a labourer. By the end of the first five years there were twenty men on the payroll, a number which has now grown to over 200.

As the business grew, Mr. Brackett extended the range of its products, and in 1914 began to manufacture, in addition to pumps, cooling water screens for power stations.

During the many years which Mr. Brackett spent in the business which he established, his enthusiasm, ability and charming personality endeared him to a host of friends.

He was known and respected not only in the engineering industry of this country, but also by many concerned with power station and other contracts in countries overseas.