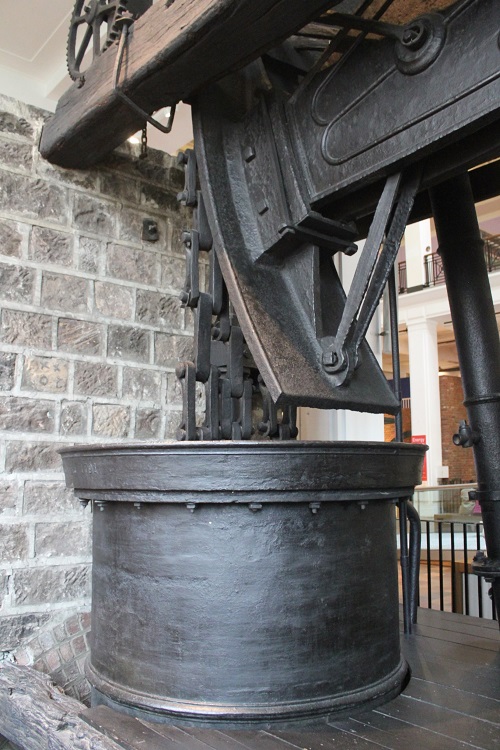 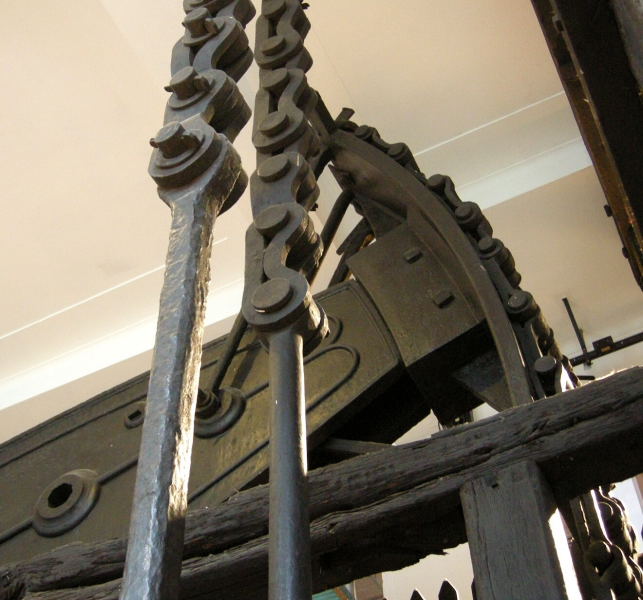 3. Note that the chains in the foreground belong to another engine, 'Old Sarah' 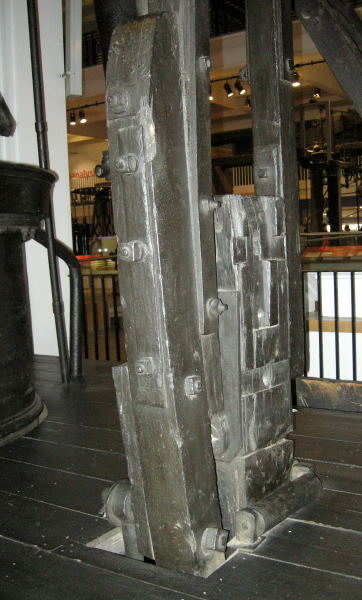 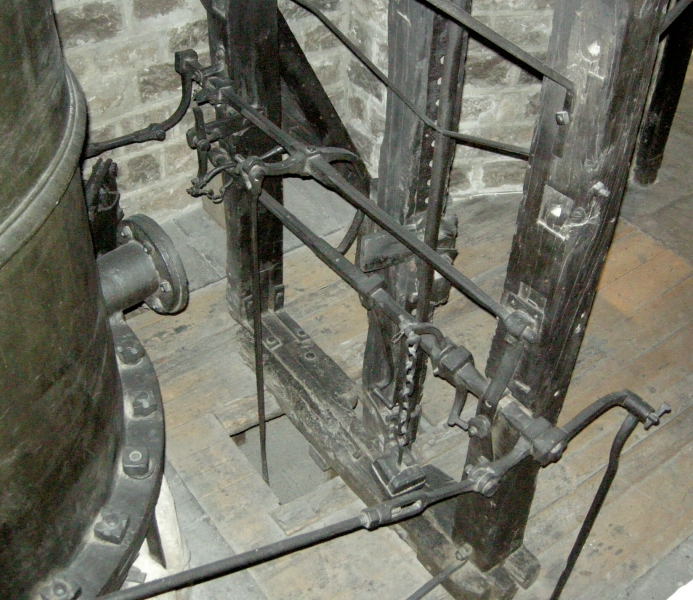 5. Valve operating gear in the 'cockpit'. Much work for the blacksmith, little for the machinist 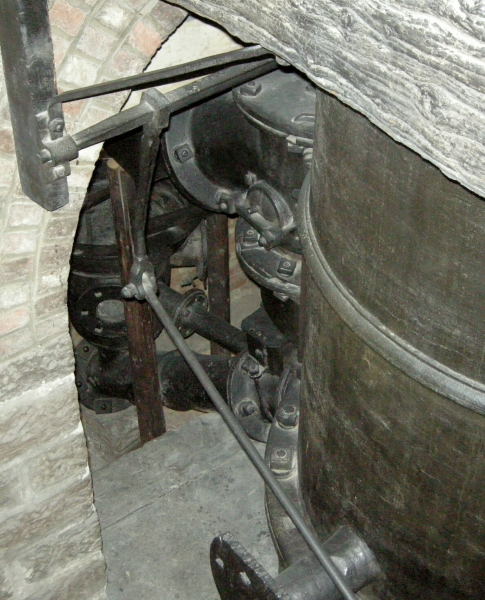 6. Bottom of cylinder. In the foreground is one of the valve-operating rods coming form the valve operating gear 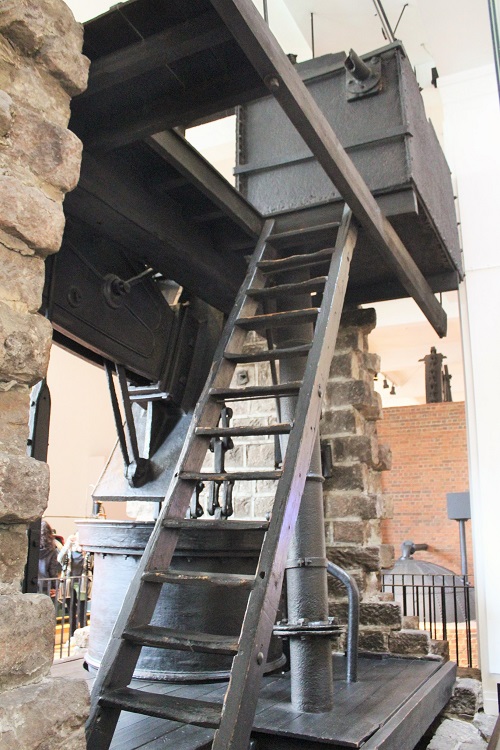 A native of Ashover, Derbyshire

1791 Built an atmospheric engine at Oakerthorpe Colliery, Derbyshire (subsequently moved to Pentrich Colliery - for a description of the engine as it was seen in the early 20th century see The Engineer 1917/01/19).

1792 Patent on an atmospheric engine with tandem cylinders

Some of Thompson's Business Activities

1782 Advertisement: 'To be SOLD, THE MATERIALS of a FIRE ENGINE, standing on the Yatestoop Mine, near Winster, in the County of Derby, consisting of
A complete Cylinder, 70 Inches diameter, with a Bottom and sinking Pipe.
Several Cast Iron working Barrels, Of six, eight, nine, and sixteen Inches diameter.
Two hundred Yards of plain Pipes, belonging the above-mentioned working Barrels.
Wrought Iron Plates, Screws and Pins for Wood Rods.
Chain of different Sizes,
With great Variety of other Articles, which will be sold very low, so as to answer for a Purchaser to carry them a great Distance. Apply to Mr. WILLIAM GOODWIN, Agent at the said Mine; or to FRANCIS THOMPSON, Engineer at Ashover in the said County of Derby. Winster, 18th March, 1782' [3]

1783 Advertisement: 'To be SOLD, Cheap, Now lying at the GRIFFIN FOUNDERY in Chesterfield, Derbyshire,
The following new Materials of a FIRE ENGINE, never taken from the Foundery;
A CYLINDER, 57 Inches Diameter, with PISTON to the fame.
A RECEIVER and REGULATOR.
STAND and COCK, PIN of BRASS.
RECEIVER DOOR, and PISTON WEIGHTS,
Inquire of Mr. WILLIAM MILNES, Grocer in Ashover, in the said County; or Mr. FRANCIS THOMPSON, Engineer, of the same Place.' [4]

1803 Advertisement: 'TO BE SOLD, STEAM ENGINE on the common plan, and equal in goodness to a new one, having worked but part of two summers. Engine is about 7½ Horse power, and the Cylinder is prepared to connect the Air Pump with it if required. -All the Framing and Timber is of good Oak, and strong enough for double power, For further particulars apply to Mr. FRANCIS THOMPSON, Engineer, Ashover, near Chesterfield.' [5]

In 1791 Thompson built a Newcomen-type beam engine for Oakerthorpe Colliery. The engine was re-erected at Pentrich Colliery in 1841, and worked until 1918, and its working life of 127 years is among the longest recorded. It is displayed in portions of its second engine house at the London Science Museum.[6] [7]

When it was re-erected in 1841 its wooden beam was by a pair of cast iron beams. Unusually, the engine retained arch heads at the ends of the beam (rather than changing to parallel motion linkage). See photo 2. The design suggests that the arch heads were made for the iron beams, rather than re-using those from the original wooden beam.

Some of Jenkins' extracts from Thompson's journal[9]

Thompson's journey to view some Cardiganshire mines in 1788 also involved a stay in Shropshire, where he met a number of acquaintances, leading Rhys Jenkins to speculate that he may have served an apprenticeship at Ketley or Coalbrookdale.

The journal contains a reference to a water pressure engine at Fairchance lead mine (Cardiganshire), 'first erected by Mr. Cole of London, but since it has been altred and finished by order of Francis Thompson, Engineer, in 1788.'

On the journey home there is an interesting reference to an engine and boiler he went to see at Stoke, built by Joseph Hateley. 'I went to view a steam engine that was begon by Mr. Joseph Hatley, engineer, with his boiler for fluid lead to heat the water, but it did not answer and he left the engine unfinished, and some time after it was finished by Mr. Willm. Sherrot (William Sherratt?) in the common way. The engine has a cylinder 24 inches diameter and a pump 22 diameter. It raises water up to a wheel to grind flint for the potter's use.'