Difference between revisions of "Essington Lewis" 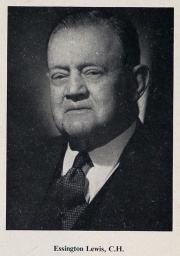 'It is not easy to judge whether Mr. Essington Lewis, C.H., who died at Melbourne on Monday at the age of eighty, will be best remembered for his remarkable services to that great Australian industrial concern, the Broken Hill Proprietary Company, Ltd., or as a great empire builder. Truly it may be said that his life was a close parallel to that of the company itself. His grandfather, Mr. James Lewis, started the connection, not by founding the company but, as a member of an expedition exploring the central Australian desert in 1844, by discovering Broken Hill. Two years after Essington Lewis was born at Burra in South Australia, valuable deposits of silver and lead were found at Broken Hill which led to the formation of the present company in 1885. It was thus natural that a lad who, after trying his hand at cattle ranching and the law, was determined to become a mining engineer should seek employment at the hill discovered by this grandfather. By that time, the company was already using the ironstone from two hills in the Spencer Gulf for smelting the silver-lead ores of Broken Hill. Joining the company in 1903 as an underground worker for 5s a day, Essington Lewis was soon made foreman of the sulphuric acid and zinc plants and a few years later promoted to assistant manager of the smelting plant at Port Pirie in which B.H.P. made its first pig iron.

It was not until 1915 when the company began producing steel at Newcastle that he was to have full scope for his technical, administrative and financial ability. The Spencer Gulf iron ore was taken by ship to Newcastle, where there was plenty of coal and a river estuary, and he at once saw the need for the company to buy its own collieries and ships if it was to become one of the largest steel producers in the British Commonwealth.

He was made general manager of the company in 1921 and managing director five years later, a position which he held until 1938, when he became chief general manager. By then, as the result of his initiative and drive, the company at Whyalla had dredged a deepwater harbour and constructed a shipbuilding, yard - now the largest in Australia - with the primary aim of building its own steamers for the transport of ore. Indeed, since its amalgamation with Australian Iron and Steel, Ltd., in 1935, the Broken Hill Proprietary Group has become an association of several companies and has spent millions of pounds developing its steel plants at Newcastle and nearby Port Kembla to reach its present production of nearly 3,000,000 tons a year.

In 1938 the Australian Government appointed Essington Lewis chairman of its advisory panel on industrial organisaton and business consultant to the Defence Department. In May, 1940, he was appointed director-general of munitions with special powers; he advised that Australia was in a position to respond to the British Government's request that she should build corvettes, frigates, and other anti-submarine craft. Having already before the war established a shell-producing annexe to the B.H.P.'s main steel plant at Newscastle, be promptly set about increasing his country's production of munitions. By 1943 he had increased the number of Government munition factories from four to forty-eight and had created 213 munitions annexes in private companies. Australia was indeed by then largely self-sufficient in munitions, he was also made director-general of aircraft production and in these two capacities he was mainly responsible for ensuring that industry was mobilised to achieve the maximum effort in support of Australia's fighting forces. For his great services in the war he was created a Companion of Honour.'