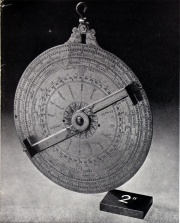 Astrolabe dating back to the 16th century. (Not a product of E. Watts but a forerunner of the theodolite).

1946. Service to the Country Certificate for 'Dorothy Evelyn' for her efforts manufacturing Scientific Instruments for H.M. Forces.

1947. In the foreground a Watts Telescopic Alidade. At the back, an Alidade made in the 18th century. 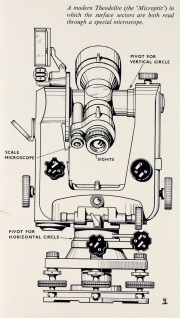 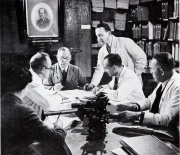 1947. The Development Committee of the Board of Directors in session. George William Watts sits below his father, on his left G. A. Whipple and at extreme right D. R. Stanley. V. W. H. Towns sits on the right of the chairman. Mr Godfrey the Chief Designer stands behind the MD. 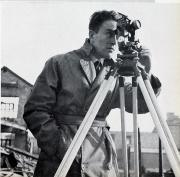 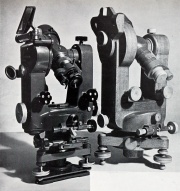 1947. AS finished theodolite beside the wooden model it was based on. 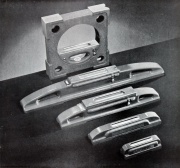 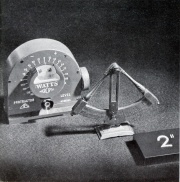 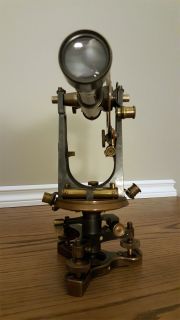 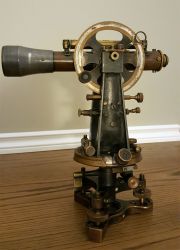 1856 Company established by Edwin Watts[1]. He was twenty-three and had saved £100 from his earnings. His staff was one boy and his workshop a small room over a Bemondsey stable.

Watts' first order was from Negretti and Zambra for a mining dial. It was a source of pride to its maker.

Alexander Clarkson, one of the apprentices who were added to the original boy when Edwin was able to leave the stable for more commodious premises in the Old Kent Road described them: "When they wanted to make a slide-rest tool, they had to wait until the kitchen fire was sufficiently hot to soften the steel bar, and the usual time was on a Saturday when the fire was stoked up to deal with the Sunday's joint. When ready for forging, the bar was taken out, rushed up one or two lights of stairs to the anvil and hammered there into shape." Mr Clarkson, who kept the gangway clear, lived to found Messrs. Clarkson and Co of Holborn, the well-known dealers of optical instruments.

In the early days the firm worked mainly on marine compasses. Edwin Watts would go down to the Docks to adjust the compasses once they had been installed on the ships.

In May 1873 the business moved to larger premises; a house with a garden, stables and a hayloft. The workshop was also the home of Mr and Mrs Watts and their five sons and three daughters. By now there were fifteen to twenty men employed by the firm and often when they arrived at 6am they found Watts still working in one of the sheds which gradually encroached on the garden.

The company were commissioned to supply the Theodolites and Levels for the Canadian Pacific Railway when it was built.

Towards the end of the century the firm began to make heliographs, continuing to produce them for the government until just before the Second World War, when by friendly agreement, assigned them to another firm.

1899 The cabinet-making department began work under the charge of Percy Lawrence Watts. Until this time such things as Theodolite cases had to be fetched from Lambeth, where they were made by a skilled craftsman over ninety years old.

1904 The first dividing engine was completed by George William Watts. It was so remarkable an instrument at the time and for years afterwards, that a full description was included in Sir R. Glazebrook's Dictionary of Applied Physics.

1907 Arthur Ames went to Canada and started an organisation in Winnipeg. In 1909 this became a separate company called E. R. Watts and Son Ltd. of Ottawa. This firm developed considerably and was eventually, with the co-operation of three other instrument companies (Cambridge Instrument Co, Ross, and Negretti and Zambra), reconstituted as Instruments Ltd of Ottawa and Toronto.

During the next ten years the firm expanded greatly to include glass grinding, leatherwork, dividing and engraving, testing , adjusting and packing. This expansion was continued during the First World War when 'MA' and 'MB' workshops were completed and the machinery installed and running within eleven weeks of the first blow of the pick.

During the war, a Sergeant Coles, among the rats, lice and mud of the trenches, fitted various bits of scrap into his cocoa tin and made the first Flash Spotter for the plotting of positions of enemy guns, which could then be silenced. Coles was rushed home to the firm's factory where he and George William Watts designed one not made out of a cocoa tin.

The Watts Vertical Force Variometer was developed during WWI. Other Watts instruments made in the First World War included the Light Mountain Theodolites which were taken on Mt Everest expeditions.

1939 G. A. Whipple joined the Board of Directors. Shortly afterwards, Frank Charles Watts died having been Chairman of the firm for over 37 years and seen it through the First World War with all its expansions and difficulties. He was succeeded by his brother George William Watts. The vacant post of Managing Director was filled by G. A. Whipple.

During the Second World War the company expanded further and the number of employees rose to over 1,300.

1948 Amalgamated with Adam Hilger as Hilger and Watts which was incorporated as a public company[4].