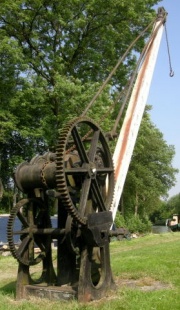 1839 'Launch of an Iron Steamer.- On Monday last was launched, from the the Duke’s Dock, an iron steam boat, built by Messrs. Page and Grantham, for Lord Francis Egerton, intended to tow goods to and Runcorn. She will be supplied with two engines of sixty horse power, now making by Messrs. Davenport and Grindrod, of the Caledonian Foundry, Naylor-street. She is called the Alice, after, believe, Lord Francis’s eldest daughter.'[1]

1841 'On Thursday, a fine iron steam-vessel was launched from the building and boiler-yard of Messrs. Davenport, & Grindrod, Patrick, North side of the Brunswick-dock. She is of about 175 tons, builder’s measurement. She was named the Blanche, and is, we believe, intended for the Runcorn trade. She will fitted with two engines, equal to 65 horse-power. — Liverpool Mail.'[2]

1843 'LAUNCH OF THE FIRE QUEEN.- On Tuesday last, about half-past twelve o'clock, a splendid new iron steamer, called the Fire Queen, was launched from the yard of Messrs. Davenport, Grindrod, and Patrick, south side of the Queen's Basin. The vessel, which is intended to carry passengers and cargo between Calcutta and Singapore, is about 300 tons burthen, and will have engines of about 200-horse power. She went off the stocks beautifully, gliding with a slow and steady motion into the river, amid the acclamations of the multitudes, who had assembled in the adjacent shipbuilding yards to witness the exciting spectacle. Just as she went off a slight accident occurred, which was not, however, attended by any very serious consequences. Several men had climbed to the roof of a wooden shed in Messrs. Davenport and Grindrod's yard. At the very moment when the vessel was set in motion, the planks of the roof gave way, and most of those who had gained this advantageous position, were suddenly plunged into the dark interior of the shed, where they not only missed seeing the launch, but a few of them sustained rather severe bruises.'[3]

1890 The O.S. map shows an 'Iron Foundry (Disused)' at the eastern end of Naylor Street, bounded on the east by Marybone and to the south by Freemasons' Street.[6]. Was this Caledonia Foundry?

They also had a shipyard at Brunswick Dock, which was at the eastern end of the extensive dock system.