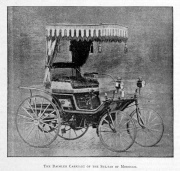 1896. Daimler Carriage of the Sultan of Morocco. 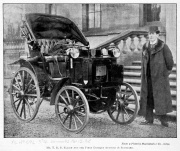 1896. Two motor-driven vehicles in the procession at the Lifeboat Demonstration, illustrative of "Coventry's new industry". 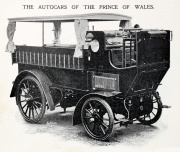 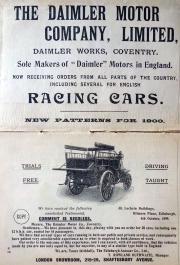 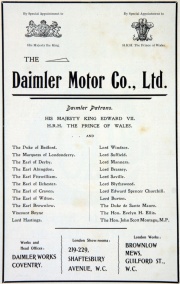 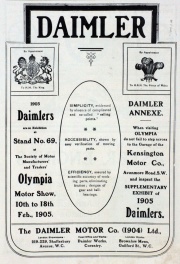 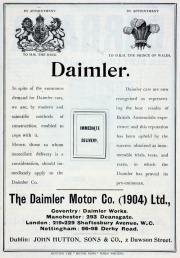 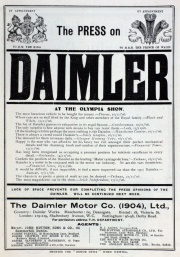 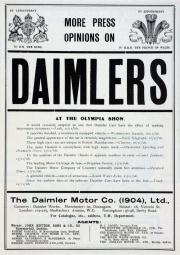 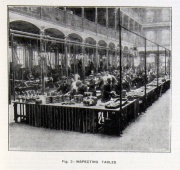 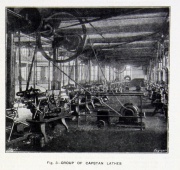 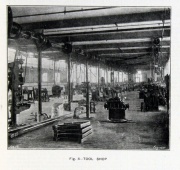 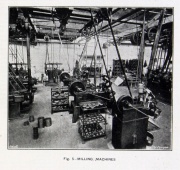 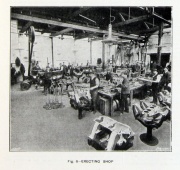 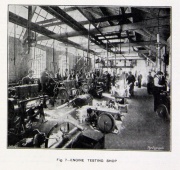 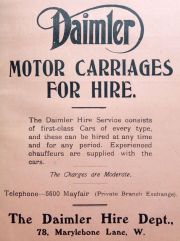 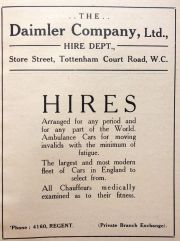 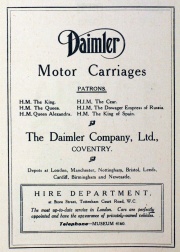 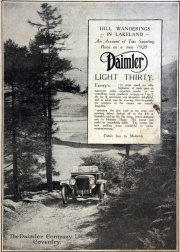 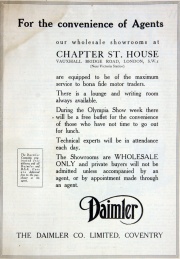 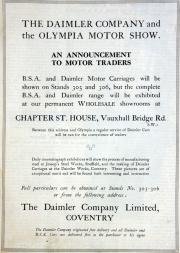 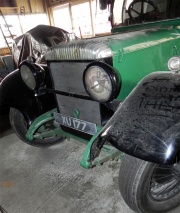 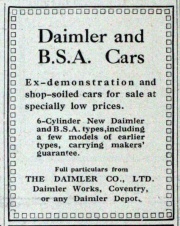 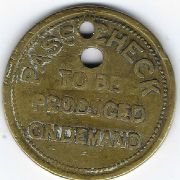 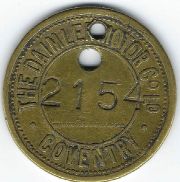 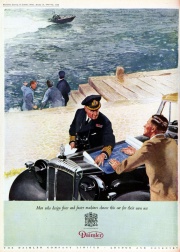 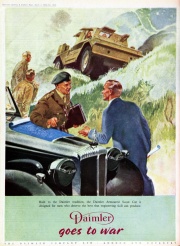 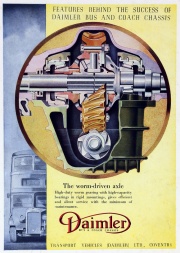 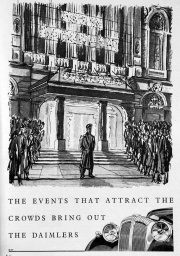 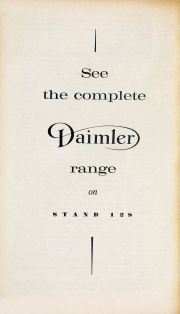 Agreement had been entered into with British Motor Syndicate to acquire UK licences to patents from Daimler[3].

After the formation of the company they appointed:

1896 April. The company purchased a lease for sixty-two and a half years on the former premises of the Coventry Cotton Spinning and Weaving Co which occupied a site of 13 acres with a newly re-build factory. The premises were four stories measuring 162 ft. by 102 ft. and was in 12 acres of ground. Part of the site was then immediately sold to the Great Horseless Carriage Co for more than the total cost of the site. [4]

1896 The Great Horseless Carriage Co was formed by Harry Lawson with the objective of gathering under one management all the patent rights held by the British Motor Syndicate other than those related to cycles; these included Daimler, De Dion, Bollee, Kane-Pennington, Garrard and Blumfield and Serpollet systems[5].

1897 March. Long article trying to defend against Daimler and the Great Horseless Carriage Co against some poor reports of the company progress. Includes images of the internals of the works.[6]

1897 Shipping fifty 'machines with motor covers' or chassis to Stirling's Motor Carriages for £13,000

1897 June. First parcel van driven from Coventry to London by Bush and Gadschen.[8]

1897 June 26th. Long and detailed letter to 'The Autocar' from Henry Sturmey, the acting chairman, mainly about how unfairly he has been treated by 'The Engineer'. Sturmey is coincidentally the editor of 'The Autocar' at this time.[9]

1897 August. Major-General Montgomery of Winchester collected his 4 hp Cranford wagonette and was later stated to be the first gentleman unconnected with the motor industry to purchase an English-built carriage

1897 October 12th. Evelyn Ellis and his daughter Mary, James Critchley and Johann van Toll drove to the top of Worcestershire Beacon (1,395 ft) in the Malverns

1897 September. Sturmey took delivery of the ninth car built completely by Daimler and then became the first person to drive from John o' Groats to Land's End.

1897 October. Second OGM and first AGM. Details of accounts. Twenty-four vehicles are in the workshops at all times and progress through in batches of six. Finishing vehicles at rate of four per week. Have supplied nine parcel vans and have more orders for them.[10][11]

1897 Exhibited at the 1897 Stanley Cycle Show. Took the largest part of the King Edward Hall. Showed 'Marseilles Phaeton', a chassis for others to add bodies', a parcels van built for Iliffe and Sons, Henry Sturmey's car, a Siamese Phaeton and a Knightley Victoria. [12]

1898. Gottlieb Daimler (in July) and J. A. Bradshaw resigned

1898 28th February. Reported to have delivered over the past nine month some 89 complete vehicles of motors and frames and 24 single engines being £23,000 of sales

1898 May. Dr. W. W. Barrett of Park Crescent, Hesketh Park, Southport took delivery of a Knightley Victoria - one of the first doctors to use a car on the road.

1898 May 7th. Trial run of the Daimler launch (2x 10-hp motors) built by Paul, Jones and Son to designs by J. and H. M. Paterson, Greenock. Mention of A. H. D. Altree, general manager, and Van Too, chief engineer of the launch department.[13]

1898 June. The Motor Mills were re-named as the Daimler Works

1898 August. EGM meeting report. Roger Bannister proposed to be chairman but the company is against this. W. B. Avery is the largest shareholder in the company. Avery, Arthur Rawlinson and Herbert A. Leake appointed to a committee to investigate.[14][15]

1899. February. A. H. D. Altree and E. M. C. Instone resigned from the board of directors and Evelyn Ellis and William Wright resigned by rotation and did not seek re-election.

1899 June. Extraordinary Meeting to update the the financial situation of the company. Present were:[17]

1901 February. Thomas Bayley and Sherwin Holt resign as Directors. Sidney Straker who had acted as the Consulting Engineer resigned and was replaced by Herbert W. Bamber

1903. Percy Richardson resigned as London Manager and U. Stratton replaced him. John M. Gorham re-joined the board of the company.

1904. Daimler purchased the buildings of the Motor Manufacturing Co (MMC) as it went in to liquidation for £14,000.

1906. Jenkinson resigned as chairman and he was replaced by Manville.

The Knight engine was developed further in England by Daimler.

1909. March. Extensive trials of the Knight Engine under the control of the RAC.

1910. Daimler was acquired by BSA. At that time the directors appointed were:

WWI. Made the 80 h.p. Gnome engine and the 70 h.p. Renault for the aeroplane industry. Produced the engine and transmission for the new military tanks. Produced shells in large numbers.

1919. Set up Daimler Hire Ltd. with a fleet of 250 cars and based at the old Prince's Skating Rink at Knightsbridge.

1927 The company was controlled by BSA

1931. The Lanchester Motor Co is taken over.

1933. The sleeve-valve or Knight Engine is finally abandoned for the more conventional poppet valve type.

1939. Absorbed the Birtley Co, Hooper and Co and Barker and Co.

1960 The company, which had been a subsidiary of BSA since 1910, now became part of Jaguar. The Daimler brand was used for their luxury models.

Later became a subsidiary of the Premier Automotive Group, making it part of Ford.