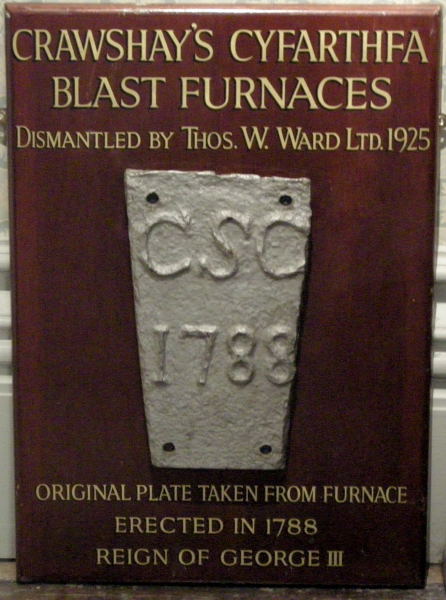 Samples of cold-bent steel made by Crawshay’s, now in a display case at Cyfarthfa Castle 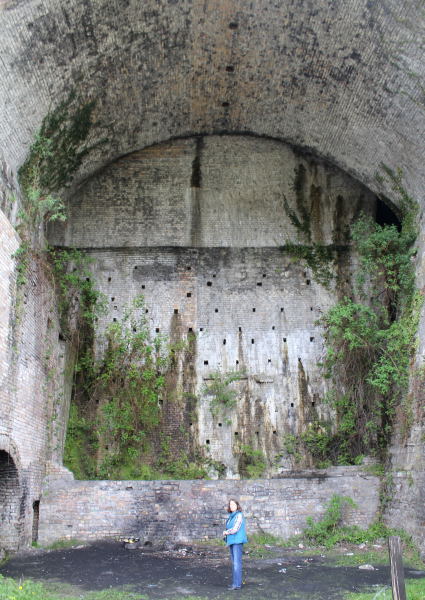 7. Engraving showing Watkin George's aqueduct carrying water to the great waterwheel at Cyfarthfa Ironworks. This is an enlarged detail from a 'Cyfarthfa & Hirwain Iron Works' £1 note displayed in the café at Cyfarthfa Castle

The Cyfarthfa Ironworks was a major 19th century ironworks located in Cyfarthfa, near Merthyr Tydfil, in Wales. It was one of the five main ironworks in Merthyr, the others being Dowlais, Plymouth Ynysfach Ironworks, and Penydarren.

The ironworks was located by the River Taff immediately south of the confluence of the Taff Fawr and the Taff Fechan.

1765 The Cyfarthfa works were begun by Anthony Bacon and his relative by marriage William Brownrigg. Built a blast furnace there.

1766 Charles Wood, a relation of Brownrigg's, supervised the building of the works and stayed in Merthyr until May 1767

The smelting of iron ore was originally accomplished with charcoal, but diminishing supplies soon forced Bacon to use coal instead. Bacon directed activities at the works until his death in 1786, when the small but prosperous works were taken over by the owners of a small operation in Carmarthenshire. These owners maintained the modest capabilities of the Cyfarthfa works.

James Cockshutt was an ironmaster 'associated with the works at Cyfarthfa' until 1791,[1] although the name John Cockshutt also appears[2]

1794 Richard Crawshay gained sole ownership from Anthony Bacon's son, Anthony, who had received the Cyfarthfa estate when he came of age. Under Richard Crawshay, the Cyfarthfa works rapidly became an important producer of iron products. Britain was involved in various naval conflicts during this time, and the demand for cannon and other weapons was great.

1802 The Cyfarthfa works became critical to the success of the war effort, so much so that Admiral Nelson paid a personal visit to the works in 1802. The Crawshay family crest included a pile of cannon balls in token of the crucial role of their ironworks. Richard passed on the responsibility for the works to his son, William Crawshay, but the latter was less committed to the business than his father.

1806 'MISCELLANEOUS. A serious accident happened last week in the mine works of Richard Crawshay, Esq. at Cyfarthfa, near Merthyr-Tidvil, by the explosion of an engine on Mr. Trevethick's plan. It is necessary in all steam engines, and especially those built on Trevethick's principle (on account of the superior power which they eminently possess over all others yet introduced or discovered), that a steam guage, charged with mercury, should be applied to them, which is so simple in itself as to be clear to any common labourer ; and if properly attended to, is a complete safeguard against accident, serving at the same time as an index to regulate the working of the machine, and shewing the strength or force of the steam in the boiler from which the engine is worked. The engine at Cyfarthfa has been at work twelve months or upwards regular and well, raising mines and pumping water for the purpose of draining the mine works, &c. from two shafts or pits a considerable depth below the surface, and has performed the duty it was intended for with the greatest ease. A steam guage was applied, agreeably to the invariable wishes of the patentees; but unfortunately within the last three months, owing to the neglect of the man employed to work the engine, the guage was rendered useless, and has been left without mercury. So loaded and secured was the guage and also the safety valve, that the engine has been working far beyond its power; and for want of the knowledge which the steam-guage affords, to regulate the working of the engine, the steam was raised to such a pitch that the boiler exploded, and forced one end it, with the steam-cylinder, &c. to a considerable distance. The engine-house was entirely demolished, and a workman carried 40 yards from the spot, much bruised and scalded ; another man, at the top of the pits, was struck by a splinter from some beams of timber which opposed the engine in its recoil from the explosion, and the resistance that the steam met with from the air, which broke his leg. It is much to be regretted that accidents of this nature too often occur, through inattention on the part of those who knew well the consequences of such neglect, and with what ease it may avoided.'[4]

1807 Was the largest ironworks in the world

1809 After a quarrel with his father, William Crawshay was replaced as his father's executor and residuary legatee by Benjamin Hall (1778-1817), his brother-in-law. Eventually William inherited only a three-eighths share in the Cyfarthfa works and spent many years acquiring the rest[5].

1817 William Crawshay gained full control of Cyfarthfa Ironworks - his son William Crawshay (1788-1867) was running the works but was constantly at odds with playboy brother Richard Crawshay, although operating as "Crawshay Brothers".

1823 The Cyfarthfa ironworks was the largest in Britain, producing 24,200 tons of pig iron from eight blast furnaces[6]

The works continued to play an enormous role in providing high-quality iron to fuel the Industrial Revolution; the Tsar of Russia sent a representative to view the production of iron rails. During this time, the Cyfarthfa works lost its position as the leading ironworks in Merthyr Tydfil to its longtime rival, the Dowlais Ironworks.

1824 Crawshay built a home, known as Cyfarthfa Castle, at a cost of £30,000. It was solidly and massively built of local stone, designed by Robert Lugar, the same engineer who built many bridges and viaducts for the local railways. It was designed in the form of a "sham" castle, complete with towers and turrets, in Norman and Gothic architectural styles, and occupied by William Crawshay II and his family. It overlooked the family-owned iron works just across the river; still stands in 158 acres of landscaped parkland.

1829 The first machine for testing the tensile strength of metals was designed, built and installed at Cyfarthfa. It was designed by the Works Engineer, William Williams. It was hydraulically operated and rated at 130 tons, and had features which would be adopted on much later machines.[7]

1843 'The largest bar of iron ever made was rolled at the Cyfarthfa Ironworks,near Merthyr Tidvil, on Saturday, last, and is, we are informed for a house in Holland. It is a gable bolt, 26 feet in length and 6in. in diameter, and weighs about 2,400lb. The pile from which it was [made was] about 7ft. long and 12in. square, and weighed upwards [of] 2,600lb. The pile was taken from the heating furnace and put at once into the rolls, in the same manner, as they roll bars at ordinary size. It was rolled under the able superintendence of Mr. Robert Crawshay.'[8]

Robert Thompson Crawshay was the last of the great Crawshay ironmasters, as foreign competition and the rising cost of iron ore (much of which had to be imported as local supplies were exhausted) exacted a heavy toll on the Cyfarthfa works. Robert was reluctant to switch to the production of steel.

1874 the works was forced to close for a long and costly changeover that was not complete until 1884, five years after Robert's death. The Crawshay heirs were unable to guide the works back to its earlier commanding position in the market.

1879 On the death of Robert Thompson Crawshay, his son William succeeded to the management of the extensive coalfields, and inherited his father's estate at Caversham in Berkshire and estate valued at under £1,200,000, and joint control of the business with his two brothers.

1879 Operating under the title Crawshay Brothers they reopened the works in October 1879 and proceeded to effect a changeover to steel production at Cyfarthfa. This move, however, did not prove to be an unqualified success and was insufficient to secure long-term survival of the works.

By 1910, the steelworks had been forced to close again

1915 Briefly reopened to produce materials for World War I

1919 the works closed for the last time. It fell into disrepair until it was dismantled in 1928. The failure of the works was a devastating blow to the local community, as it had depended heavily on the works for its economic livelihood.

The ironworks took its water from two rivers, the Taff Fawr and the Taff Fechan. These joined a short distance above the works to form the River Taff. Originally the water taken from the Taff Fawr arrived at the works in a remarkable way, being carried by a long high level wooden aqueduct across the Taff Fechan (see illustration above). Then the aqueduct took a right turn to cross the River Taff, where it was supported by the cast iron Pont-y-cafnau ('bridge of troughs'), which survives today. The aqueduct continued to the ironworks where it supplied the 50 ft diameter waterwheel designed by Watkin George to drive the furnace blast machinery.

The Pont-y-cafnau also carried the Gurnos limestone tramroad and, below that, carried water from the Taff Fechan. The wooden aqueduct had gone by 1850.

The site of the large complex has been largely cleared of recognisable features, with the notable exception of six of the masonry blast furnaces, and the Pont-y-cafnau. There are other remains, and these are identified in the Cyfarthfa Conservation Management Plan, 2009[10]

The massive furnaces make a very impressive sight, and are accessible from the Taff Trail, but visitors must recognise that the area has not been set up as a tourist site, and receives very limited maintenance. While the site is widely recognised as having major historical significance, the impression is of urban decay.