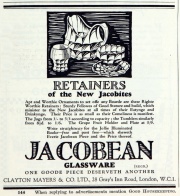 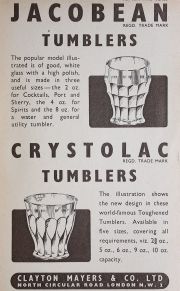 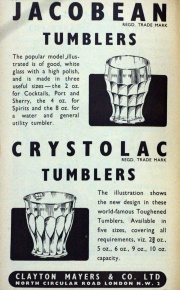 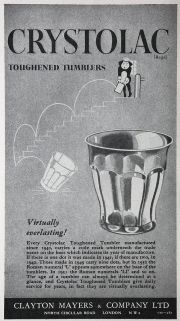 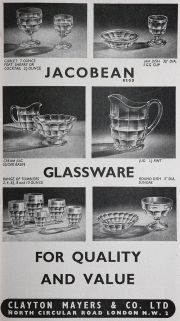 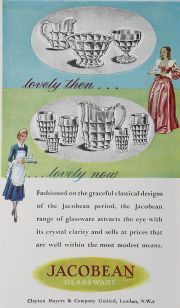 1860 James Clayton Mayers set up a shop (said to have been in "The Devizes, Somerset").

Towards the end of the 19th Century, James moved the company to London and set up business in Grays Inn Road, selling the glass of Davidson, Moor and Baccarat amongst others.

By 1923 they were selling a wide range of glassware from the UK, Czechoslovakia, Norway and Belgium.

1923 they introduced their most famous range, Jacobean. The first Jacobean design was registered (17th December 1923 No 702446). Over the next three years, Clayton Mayers registered 18 new designs, including several for Jacobean glassware.

Jacobean was an instant success, and within a few years of its introduction there were 150 different items in the range. This had increased to 275 by 1939.

Other ranges were Dazzlex, Sheraton, Vine and Ganymede, some of which were hand-cut lead crystal.

1929 Offered a free window display for use by their clients.

1930 Introduced Durobor Herculedge "Safedge Glassware" - the tumblers and like in this range were "Guaranteed unchippable on the edge". The patented Herculdege glassware was imported from Belgium.

1932 Due to the fall in value of the pound and rising government tariffs, imports became more expensive and Clayton Mayars asked George Davidson and Co to start making Jacobean and Georgian glassware for them.

Around this time Eric Mayers, younger son of James, patented a method of packing mixed quantities of glassware under pressure into cardboard boxes.

c.1939 Production of Jacobean was changed from hand-made to machine-made

1940 Introduced Crystolac toughened tumblers, also made by Davidson; these were vital in helping Davidson survive the war and the turmoil in the years that followed.

Although Clayton Mayers did not make the glass themselves, decorating and packing took place at the North London site. They also had a small melting furnace which was used to investigate the mechanical properties of glass. In 1957 this was said to be the smallest oil-fired furnace in England.

1950s they were the first glass company to advertise on the new medium of television.

Heavy advertising and promotion were a key factor in the success of the Jacobean range.

1962 H. G. Mayers retired as chairman at the age of 76. Johnsen and Jorgensen, another wholesale supplier of glass, bought a substantial stake in Clayton Mayers.

Expansion into the high quality decoration of domestic glassware. New machinery was purchased to partially automate the glass cutting and polishing process.

Over the next few years introduced new designs such as Wessex, Colour Craft, Madison, Ganymede, English Rose and Age of Chivalry.

1968 Clayton Mayers was Britain's only producer of machine-cut glass; the company became a wholly-owned subsidiary of Johnsen and Jorgensen[3].