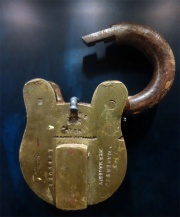 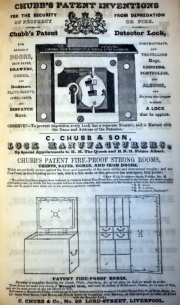 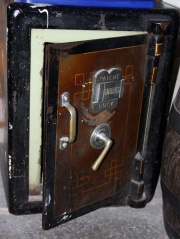 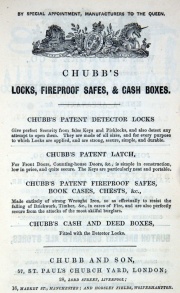 1868. Interior of factory at Gengall Road. 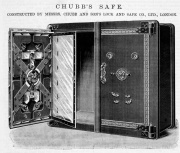 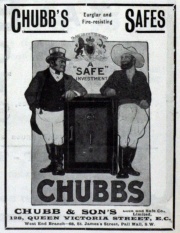 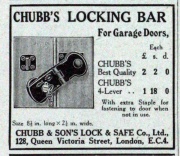 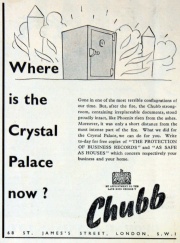 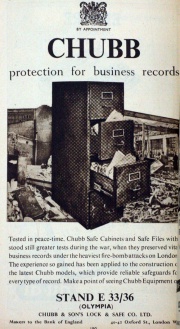 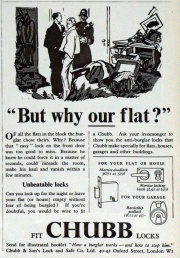 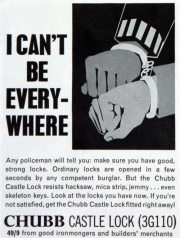 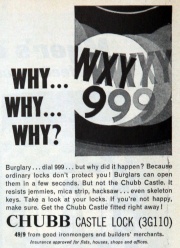 1804 Chubbs started as a ship's ironmonger, established by Charles Chubb in Winchester, and then moved to Portsmouth.

1818 Chubb moved the company into the locksmith business in Wolverhampton. The company worked out of a number of premises in Wolverhampton including the purpose built factory on Railway Street now still known as the Chubb Building. His brother Jeremiah then joined the company and they sold Jeremiah's patented detector lock, a lock that indicated if an attempt had been made to pick it.

1823 The company was awarded a special licence by George IV and later became the sole supplier of locks to the General Post Office and a supplier to His Majesty's Prison Service.

1824 Charles patented a further improvement on the lock.

1828 Dissolution of the partnership between Charles Chubb and James Hook, as Locksmiths, at 57, St. Paul's Church-Yard, in the City of London, and at Portsea, in the County of Southampton, under the firm of Charles Chubb and Co.; the business was continued by Chubb[3]. The Portsea ironmongery business seems to have been taken on by John Durrant and Thomas Ellis Owen[4]

1830 Opened a factory in Wolverhampton[5]

1835 Patent for a burglar-resisting safe.

1840s By this time Chubb had become a household name.

1841 John Chubb, Charles's son, became a partner in the business

1851 They designed a special secure display case for the Koh-i-Noor diamond for its appearance at the Great Exhibition.

1870s Chubb set up a subsidiary in the US when crime rates peaked. During this period the Time Lock (a clockwork or electronically operated time mechanism that is fitted to a safe or vault door with no outside connections) was developed, the basis upon which new locking systems were developed.

1872 After the death of John, his 3 sons John Charles Chubb, George Hayter Chubb and Henry W. Chubb were managing directors.

1882 Chubb and Sons Lock and Safe Co was registered on 14 December, to acquire the business of Chubb and Son. [7]

1894 Exhibited at Antwerp Exhibition. Awarded Silver Medal for metallurgy and Diploma of Honour for Small Machinery. [9] [10]

1900 Pamphlet describing a gunnery test of a steel safe door made by them. [11]

1923 Manufactured a 'massive circular steel treasury door, weighing 20 tons, the first of its kind to be manufactured in Great Britain and shown throughout England.[13]

After World War II Chubb expanded its operations from a single company manufacturing specialised security products with just two overseas subsidiaries, into a broad based group of companies covering many aspects of security work in the UK and 17 countries Worldwide.

1980s Since this time, the Chubb logo and trademark has consisted of a C formed to look like a lock.

1997 Company was sold to Williams

2000 The company was de-merged from Williams to become Chubb plc[16].

2003 The company was acquired by the United Technologies Corporation