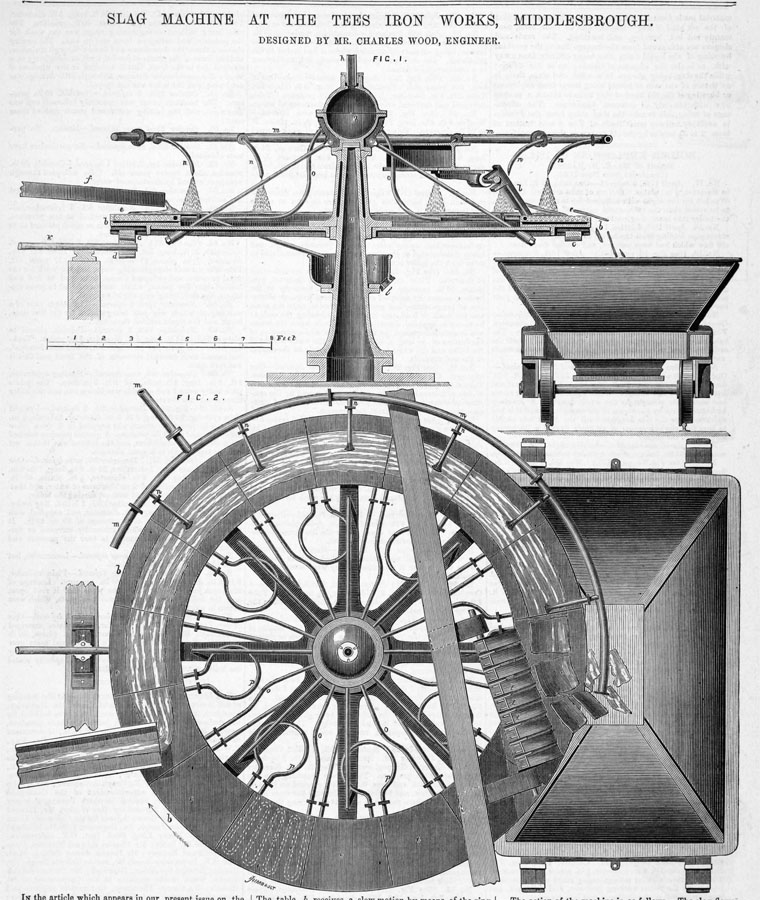 1852 Apprenticed to Ransomes and May

1856 Designed and built iron works in India, in which establishment he was appointed chief engineer

1862 Given charge of Ransomes's interests at the 1862 International Exhibition; also assisted the Royal Commission in the machinery department.

1879 Joined Inst Civil Engineers; he was at Tees Ironworks, Middlesbrough[4]

1896 Still was at Tees Ironworks, Middlesbrough[7]

c.1897 Started in business for himself as Tees Railway and Engineering Works making railway equipment, particularly for light railways, at works at Cargo Fleet[8]

CHARLES WOOD died at Middlesbrough on April 23, 1901. He was a native of Ipswich and was a schoolfellow of the late Mr. Jeremiah Head.

He served his apprenticeship there as an engineer, after which he was engaged in engineering enterprises in Russia and India. Nearly forty years ago he accepted the appointment of engineer at the Tees Ironworks, Middlesbrough, continuing in that position until three or four years ago, when he commenced business at works which he established at Cargo Fleet, near Middlesbrough, where he manufactured all kinds of railway appliances, particularly those connected with light railways. To his ingenuity and skill were due several inventions connected with the working of blast-furnaces, but he was best known by his endeavours to utilise blast-furnace slag. He invented and introduced slag wool and slag bricks.

He was elected a member of the Iron and Steel Institute in 1874, and contributed the following papers to the Proceedings:— "The application of toughened glass to permanent ways," 1879; "The economical preparation of iron for the Danks puddling furnace," 1873; "Further improvements in blast-furnace hearths," 1875; "The progress of slag industries during the last four years," 1877; "Statistics respecting the production and depreciation of rails, and notes on the application of wrought iron and steel to permanent ways, with a description of a new kind of railway sleeper and clip-chair," 1878; "The utilisation of slag," 1873; "The value of silicon pig to the ironfounder," 1885; and " The wrought iron permanent way laid upon the North-Eastern Railway," 1879.

CHARLES WOOD was born at Bramford, in the county of Suffolk, in 1834.

In the autumn of 1853 his masters sent him to India to teach and employ natives in making railway chairs for the Madras Railway Company, also to erect machinery and take charge of the foundries of the East Indian Iron Company.

In September, 1854, he embarked for India, and arriving at Porto Novo on the Madras coast set the foundry to work. He was then sent to Beypur, near Calicut, to take charge of ironworks and blast-furnaces belonging to the same Company.

After remaining there more than a year he went to Poolamputty to erect blast-furnaces, which work he carried out successfully in the face of great difficulties - away from the main road, not a European within 45 miles, surrounded by tigers, without drawings, almost without tools, and thrown entirely on his own resources. But a particular feature of his character was resourcefulness, and he carried the work through, although his health broke down under the strain.

He was then recalled to Beypur, where he remained to the close of his Indian engagement in 1857.

In the spring of 1858 Messrs. Ransomes sent him to St. Petersburg to look after their interests in the erection of machinery, &c.; and in the following spring he repeated his visit and was engaged on the erection of works on the estate of Graf Shadowski in Poland.

The next year found him in the South of Russia in the service of the same firm.

In the autumn of 1861 he returned to England and was charged with Messrs. Ransomes’ interest at the Exhibition of 1862.

In the July following he was sent by the firm to Bucharest to assist in some difficult erecting work there. At Bucharest he entered into partnership with Messrs. Ransomes' agent and had very good prospects, having been presented with a silver medal by the Government and appointed Assistant Engineer to the City of Bucharest. During his absence in England a revolution occurred, which wrecked his works and ruined his prospects. He was advised not to go back, and looked out for something to do at home. At this crisis of his fortunes his life-long friend, Mr. Jeremiah Head, recommended him to Messrs. Wilsons, Pease & Co., whom he served well and faithfully as Blast-Furnace Manager until a few years ago, when he commenced business on his own account at Cargo Fleet, where he manufactured all kinds of railway appliances, especially those relating to light railways.

In the course of his service with Messrs. Wilsons, Pease & Co. at the Tees Ironworks, Mr. Wood built for them two of the largest blast-furnaces in Cleveland. He was always on the lookout for improvements and introduced several of his own, which were generally adopted-such as a new kind of incline drop for lowering trucks from the top of the kilns, and a gun, fired by pneumatic pressure from the mouth, causing a ram to strike a copper cap, inducing explosion, adopted extensively for the dislodgment of dust in Cowper stoves.

He took a leading part in developing the slag industry, having patented in 1870 a machine for making slag sand, followed by other patents in connection with slag-slag wool as a non-conducting packing was one of them.

As early as 1860 he invented a wages-calculating machine for Indian money, shown in the Exhibition of 1862. During that year he also patented a balanced rake for hay and corn, shown by Messrs. Ransomes and Sims in the same Exhibition now in general use.

In 1867 he patented a pyrometer for heats up to from 600 to 800 (degrees), largely used by bakers and for testing heat in flues.

In 1878 he prominently interested himself in the experimental production of steel sleepers, showing their great economy for hot countries like India; and three years later he presented to the Institution a Paper on "Iron Permanent Way," embodying the results of his study of that subject.

Mr. Wood drew the attention of ironmasters in 1885 to the value of silicon in pig iron, and in 1889 to the use of alloys for strengthening materials. During the last twenty years he carried out several hundreds of miles of portable and light railways in this country.

Mr. Wood's genial disposition won him many friends. He was always on good terms with his foremen and workmen, knowing that success lay very much in the direction of harmonious co-operation.