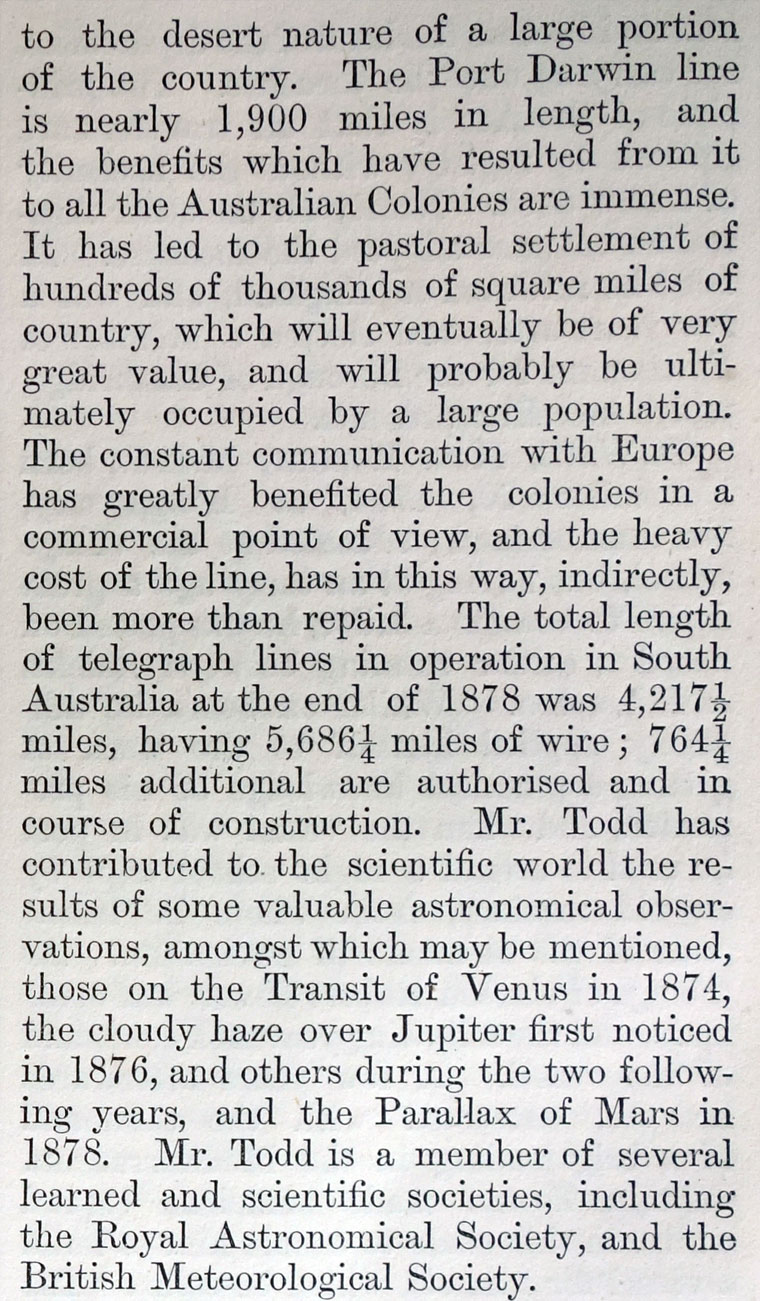 SIR CHARLES TODD, K.C.M.G., F.R.S., was born at Islington in 1826, and on completing his education was appointed assistant at Cambridge Observatory.

In 1848 he was made Assistant Astronomer at Greenwich Observatory, and in 1854 returned to Cambridge.

In 1855 he was appointed to be Superintendent of Telegraphs and Government Astronomer for South Australia. In this capacity he completed in 1858 the connection of Melbourne and Adelaide by telegraph, and afterwards the Transcontinental line between Europe and America.

He held the post in South Australia for fifty years, and for thirty-five years was also Postmaster-General of that colony.

TODD CHARLES, C.M.G., Postmaster-General, and Superintendent of Telegraphs, Astronomer and Observer, Adelaide, South Australia, born in London in 1826, where he was educated at a private school. On leaving school he was engaged as an assistant and calculator at Greenwich Observatory, at the same time continuing his studies under some of the Professors of Cambridge University.

In 1848 he was appointed Assistant Astronomer at Cambridge Observatory, which position he held until 1854, when he took charge of the Galvanic department of the Royal Observatory, Greenwich, and was also appointed by the Lords of the Admiralty as one of the Astronomers. In 1855 Lord John Russell, as Secretary of State for the Colonies, appointed Mr. Todd to the position he now holds of Astronomer and Superintendent of Telegraphs for South Australia.

In 1870 the Governor of the colony amalgamated the Telegraph and Postal departments, and Mr. Todd was appointed Postmaster-General. As far back as 1859 Mr. Todd pointed out the importance to England of having an independent telegraph system, and when the proposal was made to construct a line of telegraph wire from Adelaide to Port Darwin, to be there connected with a submarine cable between Java and Singapore, he entered heartily into the work, a large portion of which was done under his personal superintendence.

The line which connected the Australian Colonies with the rest of the world was completed August 22, 1872, amidst great rejoicings. Mr. Todd connected the wires in the centre of the continent, at Mount Stuart, and received a great number of congratulatory messages. For this important national work he received from Her Majesty the honour of the Companionship of the Order of Saint Michael and Saint George; Mr. Henry Ayers, who was at the head of the South Australian Government at the time the line was completed, also received the honour of Knighthood, as well as that of C.M.G. Mr. Todd has since planned the overland line to Eucla, 1,000 miles in length, connecting South and Western Australia, which was carried out under circumstances of peculiar difficulty, owing to the desert nature of a large portion of the country. The Port Darwin line is nearly 1,900 miles in length, and the benefits which have resulted from it to all the Australian Colonies are immense. It has led to the pastoral settlement of hundreds of thousands of square miles of country, which will eventually be of very great value, and will probably be ultimately occupied by a large population. The constant communication with Europe has greatly benefited the colonies in a commercial point of view, and the heavy cost of the line, has in this way, indirectly, been more than repaid.

The total length of telegraph lines in operation in South Australia at the end of 1878 was 4,217.5 miles, having 5,686.25 miles of wire; 764.25 miles additional are authorised and in course of construction.

Mr. Todd has contributed to the scientific world the results of some valuable astronomical observations, amongst which may be mentioned, those on the Transit of Venus in 1874, the cloudy haze over Jupiter first noticed in 1876, and others during the two following years, and the Parallax of Mars in 1878.

Mr. Todd is a member of several learned and scientific societies, including the Royal Astronomical Society, and the British Meteorological Society.