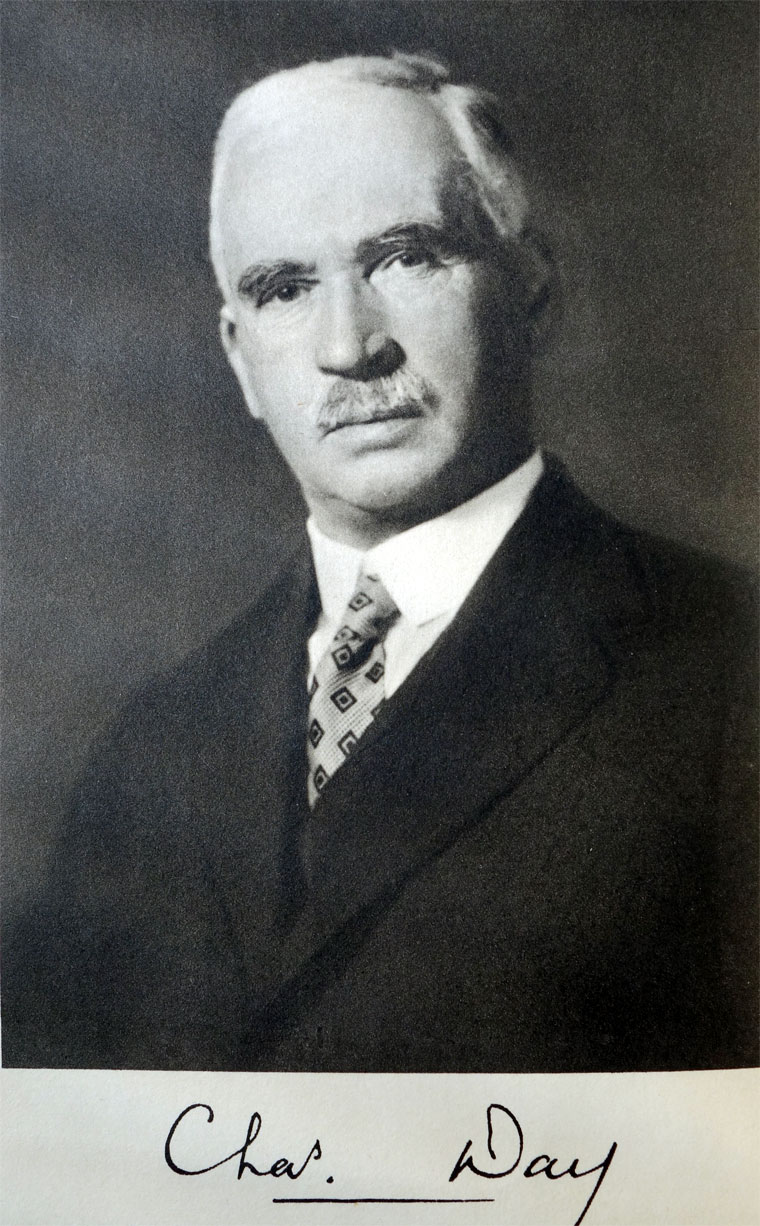 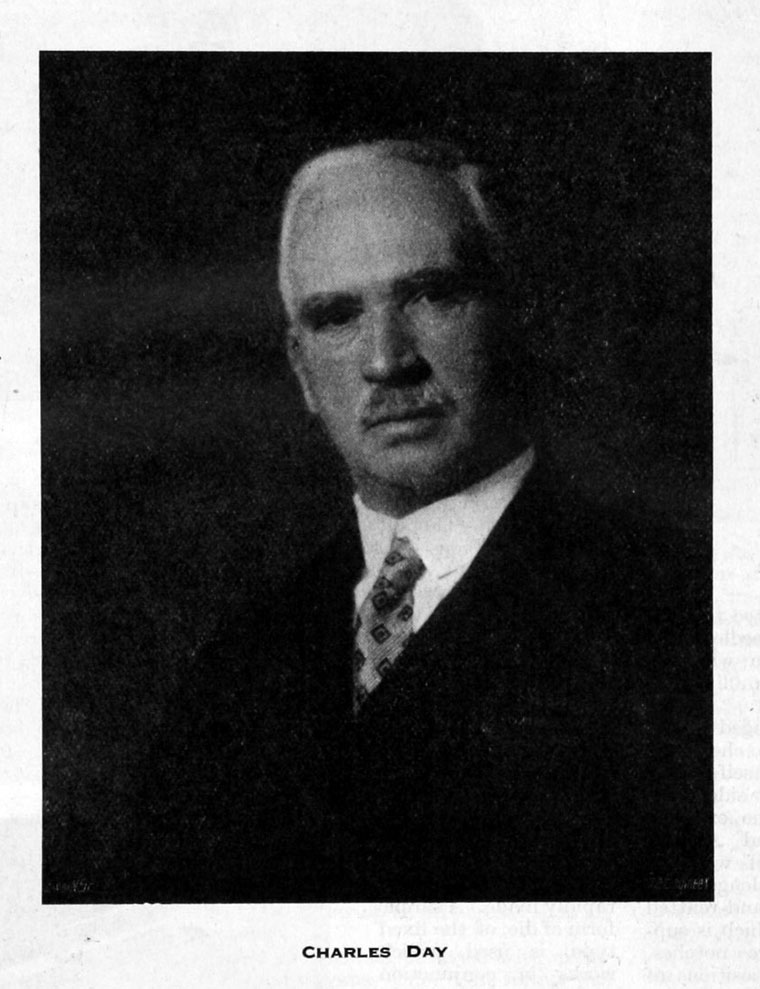 1908 Charles Day set up a new factory in a small village called Hazel Grove, on the outskirts of Stockport, to manufacture diesel engines. With the financial assistance of H. N. Bickerton, Mirrlees, Bickerton and Day was incorporated. The factory opened during October 1908 for the manufacture of diesel engines ranging in power from 50 BHP to 750 BHP.

1909 Lectured on the diesel oil engine at the Manchester Technical School[1].

"CHARLES DAY was an outstanding mechanical engineer and industrialist, and a leader in the British oil engine industry, and his death in a Manchester nursing home on Saturday, June 18th, will be deeply regretted by his many friends throughout Great Britain. He was born in April, 1866, and received his early education at the Stockport Grammar School, from 1877 to 1881. Some time later he continued his technical education at the Manchester Technical School and Owen's College, afterwards the Victoria University, gaining a. Whitworth Scholarship and his degree M.Sc. Tech. Mr. Day served his apprenticeship with Emmerson Murgatroyd and Co., of Stockport, and completed his apprenticeship with Andrews and Co., Stockport, which firm subsequently became the Stockport Gas Engine Co.

He was engaged here on engine testing and drawing-office work and came in contact with the late Mr. A. R. Bellamy, who gave him a sound training and put him on the right way to progress. His first move from Stockport was to Joseph Adamson and Co., of Hyde, where he was appointed head draughtsman.

Later, Mr. Day moved to the firm of Daniel Adamson and Co., of Dukinfield, where he stayed for a year and a half, and was the senior draughtsman, being engaged primarily in the development of what became known as the "Charter" gas engine, an American design, which on test did not give results justifying its perpetuation. It was Mr. Day's experience under A. R. Bellamy and later with the "Charter" gas engine which fitted him years afterwards to persist under discouraging conditions with the diesel engine when it had been virtually abandoned by the first British licencees....[More]

CHARLES DAY, M. Sc. TeCh.,Wh.Sc., was born at Newcastle-under-Lyme, Staffordshire, in 1867, and educated at the Stockport Grammar School. He later attended the Manchester Technical School (now the College of Technology) under Professor Jordan. At the age of eighteen he received a Whitworth Scholarship, and attended further evening classes in electrical engineering and a summer evening course, at Owens College, in industrial chemistry. He served an apprenticeship in engineering with Messrs. Emerson Murgatroyd and Company, Stockport, and J. and H. Andrew and Co, makers of the "Stockport" gas engine.

At twenty-three he was appointed chief draughtsman at the boiler works of Messrs. Joseph Adamson and Company, Ltd., Hyde. He afterwards joined the engine department of Messrs. Daniel Adamson and Company, Ltd., Dukinfield, and later the National Boiler Insurance Company, Ltd., where he started a branch for dealing with the insurance of steam engines. Whilst with this company, Mr. Day wrote articles for The Practical Engineer on the subject of "The Testing of Engines and Boilers", and also a book on "Indicator Diagrams".

His work on engine testing brought him into contact with Messrs. Cole Marchent and Morley, Ltd., Bradford, who had taken up the manufacture of Corliss-type steam engines. He subsequently joined that firm as manager in 1895. In 1899 he visited the United States, where the horizontal Corliss-type steam engine had been widely adopted for direct-driven dynamos used to supply current to tramways.

Mr. Day next took up a position with Messrs. Ferranti, Ltd., Hollinwood, as manager of their engine department. The engines built at that time were cross-compound engines with flywheel alternators, installed at power stations chiefly in the London area.

In 1902 he joined the Mirrlees Watson Company, Ltd., Glasgow, as general manager, later becoming chairman and managing director. To provide additional work for the shops he started a new department to deal specifically with condensing plant-now an important section of the company's business.

The Mirrlees Watson Company had acquired Dr. Diesel's patents and designs, and a Diesel engine had been built in 1897 and officially tested by Professor Watkinson of the Liverpool University. This was the first Diesel engine built in Great Britain and the third in the world. When Mr. Day joined the company he found that, owing to technical troubles, the engine had been abandoned. He visited Augsburg to study the developments that had been made in Germany.

Work on the original engine was resumed and a number of improvements introduced. Further, the Board authorized the production of two additional Diesels to the latest drawings, and a Diesel engine department was established. In 1905 engines were supplied to the Admiralty for HMS Dreadnought. These engines ran at 400 r.p.m. (the earliest high-speed Diesels); they were totally enclosed, and remarkably modern in appearance and design. About the same time a lighter type of engine was also supplied to the Admiralty for pinnace propulsion. By 1906 the Diesel engine business had developed to such an extent that the necessity for expansion became apparent, and in 1907 Mr. Day, in conjunction with Mr. H. N. Bickerton, formed a new company at Stockport for 'the manufacture of Mirrlees Diesel engines, a modern works being built and equipped. The new company was named Mirrlees Bickerton and Day, Ltd.

In 1926, the Mirrlees Watson Company, Ltd., and Mirrlees, Bickerton and Day, Ltd., amalgamated, Mr. Day being the managing director and, later, chairman of both companies. In 1944 the Diesel engine business was sold to Messrs. Associated British Engineers, Ltd.

Mr. Day resigned from the chairmanship of the Mirrlees Watson Company, Ltd., in 1946, at the age of seventy-nine, but continued as a director, still taking an active part in the business until his death. He was also a director of Messrs. Mirrlees (Engineers), Ltd., makers of "IMO" pumps, and of Messrs. John Hall and Son (Oldham), Ltd., engineers and ironfounders, Oldham.

Mr. Day paid visits to the United States and Canada, and has always greatly valued the friendships he made in those countries. There he heard good reports of the "Combustioneer" underfeed stoker. Contact with the Steel Products Engineering Co, of Springfield, Ohio, makers of the Combustioneer stoker, led to the formation of the Mechanical Stoker Division of the Mirrlees Watson Company, Ltd. He visited Sweden on several occasions and formed valued friendships there. His contact with Aktiebolaget Imo-Industri, of Stockholm, resulted in the formation of Messrs. Mirrlees (Engineers), Ltd., Hillington, Glasgow, who have their own works devoted specifically to the manufacture of IMO pumps.

In the 1914-18 war he served on the Lancashire Anti-submarine Committee, which included many prominent Lancashire engineers and scientists, and pioneered submarine detection. He was also a leading member of the Associated Group of Tank Engine Builders, which carried out valuable work in connection with the development and construction of tank engines in the 1914-18 war. This group was composed of the principal firms of engine builders in the Manchester area.

In the 1939-45 war he was intensively engaged in the organization of production to deal with the heavy demands for Diesel engines for war service, aircraft parts, guns, and also the "Imooil" pumps for submarines, etc.

He was a member of the Whitworth Society, London, and member of the College of Technology Engineering Section for forty years, and of the Governing Body of the College from 1911. He took an active part in formulating and carrying out a scheme of technical education for the engineering profession, which is now one of the most prominent features of the Manchester College of Technology. In recognition of these services the Honorary Degree of M.Sc. Tech. was conferred upon him in July 1914.

He took an active interest in the affairs of Stockport, serving for a number of years on the Board of the Stockport Infirmary. He was a Governor of the Ephraim Hallam Trust, and a Past-President and Member of Council of the Stockport Chamber of Commerce.

As a young man Mr. Day was a keen swimmer, being Captain of the Stockport Swimming Club. He also attended the Lads' Club where he practised boxing and other sports. He was a member of the Stockport Golf Club for many years, and a Life Member and joint founder of the West Bowling Golf Club, Bradford. He was fond of gardening, and was a Fellow of the Royal Horticultural Society.