Difference between revisions of "Charles Beyer" 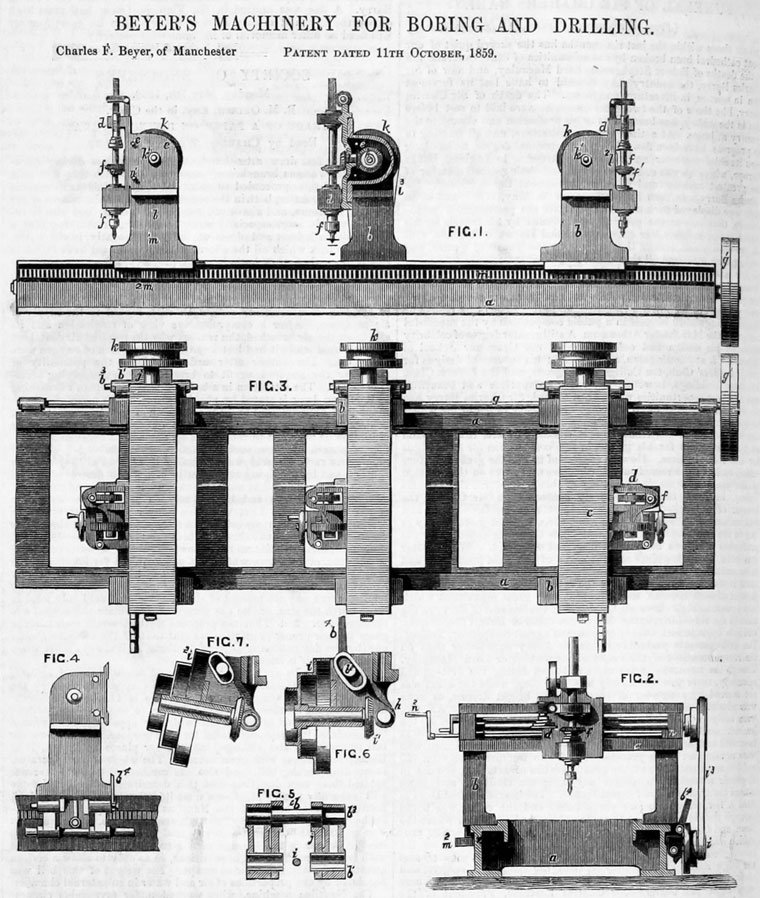 1813 May 14th. Carl Friedrich Beyer was born the son of a weaver, born in Plauen, Saxony. He was taught to draw by a student, convalescing in the district. Some of his pinned-up drawings were noticed by a local official, and a place was procured for him at Dresden Polytechnic, an institute of technical education. (It was said that his parents could not afford his education, but were afraid of giving offence to the civil servant.) Beyer supplemented a meagre state scholarship by doing odd jobs. (A philanthropic lady was in the habit of giving Sunday dinner to the student with the highest marks that week. Beyer relied on the meal, and consequently made sure that he out-performed everyone else.)

Upon graduation, he obtained a state grant from the Saxon Government to visit the United Kingdom to report on weaving machine technology. He visited Manchester, then considered the major centre in engineering technology. He returned to Dresden to file his report.

1834 (or 1837/8[1]) He returned to England and wanted experience at a large foundry, but his youth and foreign origin seemed to tell against him. At one interview, he was offered some gold sovereigns to defray the costs of his journey. He angrily expostulated that it was work that he wanted, and this swayed the potential employer. He began work as a draughtsman with Sharp, Roberts and Co in Manchester, one of the foremost British locomotive builders and developed a lifelong friendship with Richard Roberts.

1843 When the company became Sharp, Brothers and Co, Beyer was promoted to chief engineer in place of Richard Roberts[2].

1852 Stewart joined the company which became Sharp, Stewart and Co. Shortly after this, Beyer left having been engaged there for 16 years[3].

1854 Site for new works in Gorton, Manchester. The new works was built on a site that was then virtually in open country, and the undertaking was always known locally as 'Gorton Tank'.

Beyer-Peacock became one of the most famous locomotive building companies, exporting engines all over the world. They remain famous for the 'Beyer-Garratt' articulated locomotive, which was extensively used by South African Railways, East African Railways, and Australia. A narrow gauge version can still be seen in operation on the Welsh Highland Railway. This is not a narrow gauge version, K1 is in fact the first Garratt to be built, returned to England from New Zealand and put on display at the National Railway Museum York. Before being returned to working order on the Welsh Highland.

He was a founding member and a prime mover in the foundation of the Institution of Mechanical Engineers in 1847.

CHARLES FREDERICK BEYER was born On 14th May 1813 at Plauen, Saxony, his parents being in humble circumstances and working at hand-loom weaving.

After studying for four years in the polytechnic school at Dresden, he worked two years in a machine shop in Chemnitz; and in 1834 was commissioned by the Saxon Government to visit England and report upon the improvements in machinery, chiefly in regard to cotton spinning.

In the following year he obtained an appointment as draughtsman in the works of Messrs. Sharp Roberts and Co., Manchester, where he speedily attracted the notice of Mr. Roberts, both as a mathematician and as a quick and true draughtsman. The firm about that time began to turn their attention to the manufacture of locomotive engines; and the carrying out of this branch of their business under Mr. Roberts' instructions being entrusted to Mr. Beyer, the foundation was laid of a high reputation for building locomotives, and a large number of distinctive character and excellent workmanship soon made their appearance upon various English and continental lines, which proved eminently satisfactory in their performance.

In 1843 on the retirement of Mr. Roberts he became the mechanical head of the works, and continued in that position for ten years.

In 1854 he joined Mr. Richard Peacock in establishing the large and successful locomotive works of Messrs. Beyer Peacock and Co., Gorton Foundry, Manchester. In the designing of these new works, he as arranged the various sections of the works that they formed almost exact counterparts of one another, so far as the buildings were concerned, and admitted of the subsequent gradual expansion and enlargement of the whole by the simple addition of other sections, without disturbing or altering the portions previously erected. In the production of most of the details of locomotive engines he designed and adapted many special tools, thereby at once improving the character and reducing the cost of the work done; and ho brought to bear upon locomotive design an innate perception of mechanical fitness and a refined taste, that have given a distinctive stamp to his numerous works.

He took an active interest in and gave valuable support to the extension and rebuilding of Owen's College, Manchester, having been early impressed with its importance from his familiarity with the successful working of German polytechnic schools, and he left a large bequest for the foundation and endowment of professorships of science at the College.

He was one of the founders of the Institution, and a Vice-President for a number of years; and he contributed several papers to the proceedings.

His death took place after a considerable time of failing health at his residence, Llantysilio Hall, Denbighshire, on 2nd June 1876 at the age of 63.