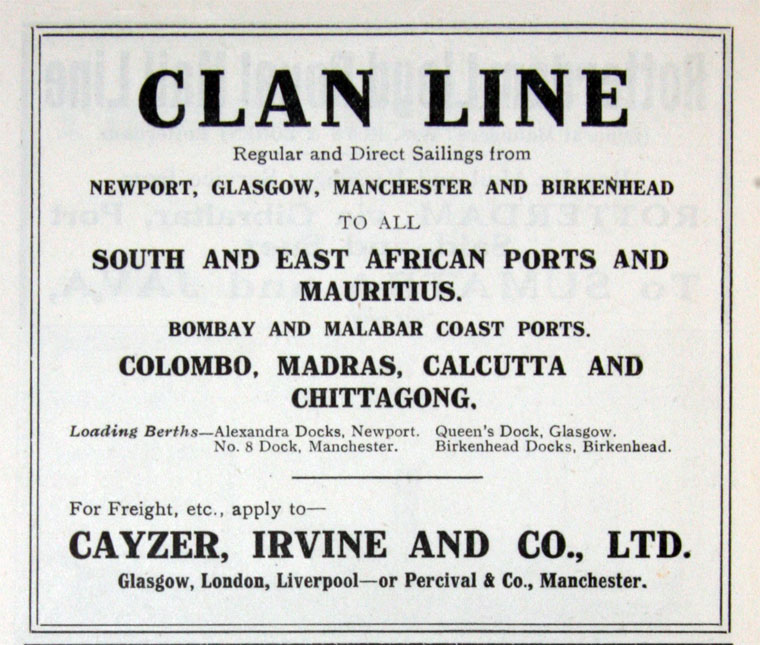 1878 Mr. C. W. Cayzer founded Cayzer, Irvine and Co with the S.S. Clan Alpine and S.S. Clan Fraser, of 2,080 tons each built at Linthouse by Alexander Stephen and Sons. Mr. John Muir was associated with this venture and the Stephens gave an extension of the terms of payment for their vessels, to facilitate the foundation of the new company. Subsequently it became known as the Clan Line.

1917 Purchased Turnbull, Martin and Co and hence took over Shire Line which was incorporated in Clan Line

1918 Acquired the Mid-Cartsdyke yard in Greenock from Grangemouth Dockyard Co. The yard went on to build over 65 Clan Line cargo-liners. The yard's name was changed to the Greenock Dockyard Co.

1930s The Mid-Cartsdyke yard was closed for the first half of the 1930s due to The Depression. The company swapped its Mid-Cartsdyke yard with the Cartsdyke East yard of Scotts. The workforce moved to the new yard and began building liners for Clan Line again. Eleven cargo-liners were also completed at the yard prior to the outbreak of World War II.

1945 onwards, the yard focused on rebuilding itself after bomb damage and also built a number of large ships for the sugar importers and refineries of the Lyle family. In addition, many ships were brought into the yard to be repaired following the War.

In September 1958 the tanker Clan MacIver nearly capsized but this was averted by quick thinking technicians and divers who emptied out the dock and then realigned her. Throughout the 50s, the yard also made a number of tankers.

1960s The Cartsdyke East yard was modernised between 1958 and 1964. On 1st April 1966 the yard was merged with the Cartsburn yard of Scotts where it became a key part of Scotts' history.