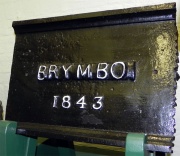 1843. Exhibit at the Bersham Heritage Centre. 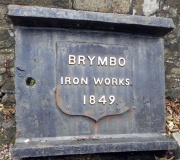 1849. Exhibit at the Bersham Heritage Centre. 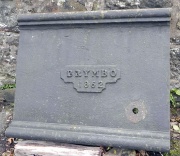 1862. Exhibit at the Bersham Heritage Centre. 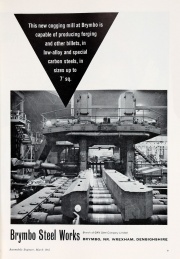 The Brymbo Steelworks was a large steelworks in the village of Brymbo near Wrexham, Wales.

1793 Iron works were founded at Brymbo by John 'Iron Mad' Wilkinson who built a blast furnace in 1793, just after he bought Brymbo Hall. The reasons for his move from the nearby Bersham Ironworks are not clear, but it may be that there was no room for expansion, that he only rented Bersham, or due to difficulties with his brother William, who was claiming a share in his business.

After Wilkinson's death, his estate was contested between his natural children and legitimate heirs and the works passed through various hands.

1842 Henry Robertson, civil engineer, was approached by a group of investors, (including William Mackenzie, William Betts, and A. M. Ross) to report on the practicality of restoring the derelict Brymbo ironworks. Robertson was favourably impressed by the industrial potential of the area and, when the necessary capital had been raised, he moved south to Chester[1].

The Brymbo Iron Co was formed to manage the works

1846 William Henry Darby and Charles Edward Darby, grandsons of Abraham Darby (1750-1789) of Coalbrookdale, took on the management of the business.

1883-4 John Henry Darby designed and erected the Brymbo Steel Works where basic open hearth steel was first made in Britain on a commercial scale.

1933 A receiver was appointed

1934 The works re-opened, taking on some of the workers who had been laid off when it closed 3 years previously[4]. The rolling mill was electrified and the old steam mill engine was scrapped[5]

1942 A blowing engine was installed by Richardsons, Westgarth and Co‎

The works were served by the Wrexham and Minera Branch of the Great Western Railway, later of British Railways.

1948 The works and property of Brymbo Steel Co were transferred to GKN, which used the steel "sheet" bars produced by the works; the company name was changed again to Wrexham Steel Works Ltd.[9]

1955 Private sale of Brymbo Steelworks by Holding and Realisation Agency[11] to GKN [12].

1959 Installation of electric arc furnace which for the first time (in the UK?) could receive a major charge of molten iron from a blast furnace[13]. Mill enlarged.

1967 After some argument about whether GKN's vertical integration should mean that Brymbo was not nationalised with the rest of the steel industry, it became a division of British Steel