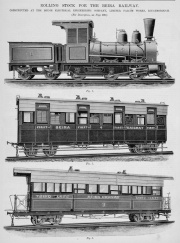 1893. Rolling Stock for the Beira Railway. 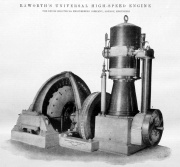 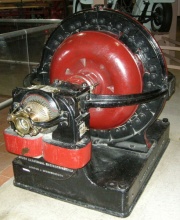 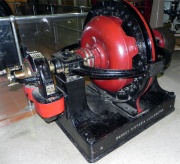 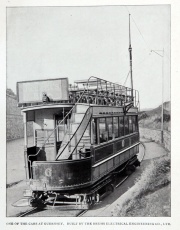 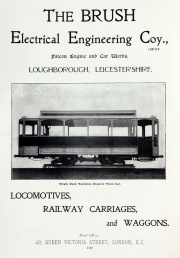 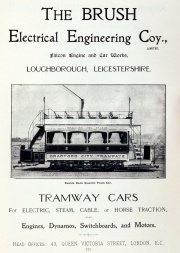 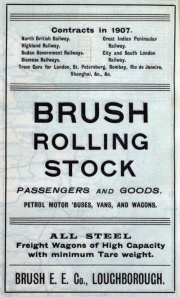 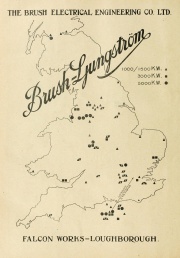 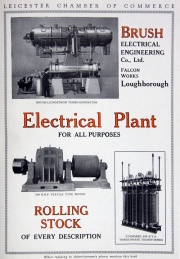 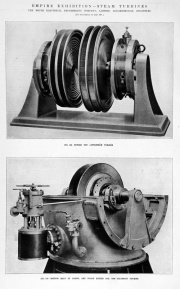 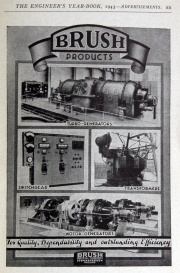 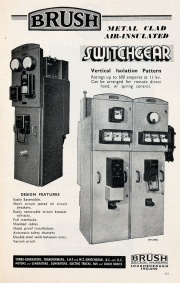 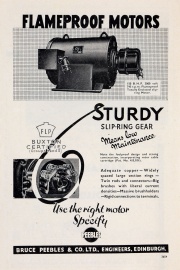 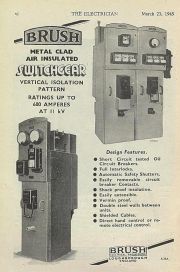 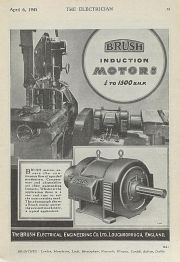 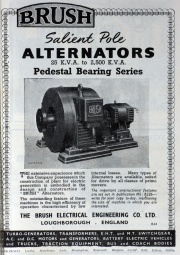 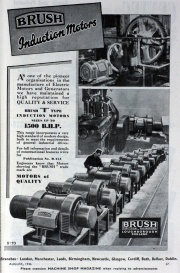 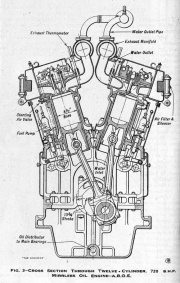 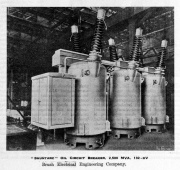 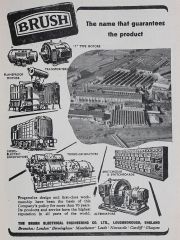 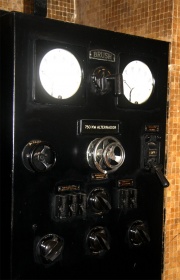 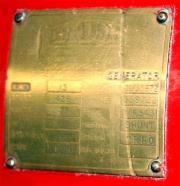 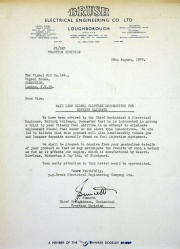 1881 The Electric exhibition at Crystal Palace was organised for 1882; it was planned that the north end would be lit by Brush Co using arc lights; other parts at that end would be lit by Lane Fox incandescent lamps; Electric Light and Power Generating Co would also use arc lights; Maxim, Crompton, Pilsen, Edison, Werdermann, Siemens and Hammond system would also be used to light other parts of the building[1].

1890 One of two contractors providing the lighting for the Edinburgh exhibition. The other was King-Brown and Co. [3]

1898 British Electric Traction Co and Brush Electrical Engineering Co established the Electrical Power Distribution Co to provide electricity supply in municipal areas to a range of users who would otherwise obtain supplies from more than one source. This would thereby effect economies of operation[6].

1900 June. C. E. Hodgkin resigns his position as works manager and joins the Board.[7] Company appoints Mr. Edward A. Lesson to be works manager at the Falcon Works.[8]

1904 British Electric Traction Co was still of the opinion that the purchase of Brush would turn out be a good investment[14].

1905 Built the first all-steel railway carriage to be constructed in Britain, at the suggestion of Mr Charles Yerkes for the Underground Electric Railways of London[15]

1905 The company had won the only substantial orders for steel railway carriages and continued to build wooden ones for other railway companies. Developed Brush-Parsons turbine and a new type of reciprocating engine. Increased production of dynamos, motors and transformers[17].

1906 Had established a department to make motor omnibuses, for sale in areas where tramways were not accepted[18]

1907 Brush had taken a lease of the works of the British Automobile Development Co, adjoining the works at Loughborough, and were producing motor omnibuses and every type of commercial motor vehicle[19].

1909 Emile Garcke agreed to become chairman in order to help achieve a capital reorganisation of the company.

1912 The company had been building turbines for many years and recently orders had exceeded capacity, both for power stations and large industrial installations. Orders were in hand for railway rolling stock for a number of countries as well as the Central London Railway. The capital reorganisation had still not been completed but it was anticipated it would be implemented in this year.[21]

Post-WWI Production of steam locomotives finished after WWI. In all, about 250 steam locomotives had been built in addition to tram engines. The company concentrated on electrical equipment, particularly the Brush-Ljungstrom turbine, and rolling stock for railways, tramways and other purposes, trolleybuses and battery-operated vehicles but the coachworks also continued.

1920s-51 Major builder of bodies for single- and double-deck buses.

1927 See Aberconway for information on the heavy electrical engineering side of the company.

1938/9 Purchase of Petters oil engine production plant and business; transfer from Yeovil to Loughborough[26] in exchange for shares in Brush. The name Petters was to be made available to Brush together with the goodwill once Petters have held the necessary EGM[27].

1939 The name of the Petters engine business was changed to Associated British Engineering - essentially a holding company with aim of consolidating the oil-engine industry [28].

1939 A. P. Good appointed deputy chairman. Good went onto implement his vision for the British diesel engine industry with each factory focussed on a limited range of products, within a group covering a wide range of engines. He became chairman of the executive committee in 1941[29].

1945 Acquired Oil Engines (Coventry) Ltd from Lagonda Ltd as part of Brush's plans to extend their range of diesel engines[30].

1947 Close to Derby and its railway workshops, Brush retained its contacts with the railways; joined with W. G. Bagnall to produce diesel locomotives. When British Railways began to replace its fleet of steam engines, Brush entered the market for main line diesel-electric locomotives

1948 Production of small and heavy engines increased, sold under the Petter trade mark; costs reduced through redesign since the end of WWII. Plans underway to acquire Mirrlees, Bickerton and Day Ltd (Stockport), and J. and H. McLaren Ltd (Leeds) which made diesel engines in complimentary sizes to the Petter range[32].

1948 Approval of acquisition of Mirrlees, Bickerton and Day Ltd and J. and H. McLaren Ltd, subsidiaries of Associated British Engineering[33].

1949 Company meeting told about working arrangement with W. G. Bagnall Ltd of Stafford to enable delivery of complete diesel-electric locomotives from one source. Manufacture of small diesel engines had been transferred from Loughborough to McLaren's plant at Staines. Manufacture of large diesel engines to be transferred to Mirrlees plant at Stockport which made engines of similar size. Medium size diesels were manufactured at McLaren's plant at Leeds. Heavy engines were produced at Loughborough and Stockport. Announcement of close liaison with Henry Meadows Ltd of Wolverhampton which had one of the most modern engine factories in the country. This would enable production of a new range of diesel engines that Brush had designed, without expenditure on new tooling and production plant. Henry Meadows also produced gear-boxes which they would supply to Brush for use with their diesel engines, meeting a large proportion of Brush's needs from one source [34].

1950 Brush Electrical Engineering Co, as parent of the Brush ABOE Group, acquired a shareholding in National Gas and Oil Engine Co of Ashton under Lyne at cost from Associated British Engineering with option for Brush to acquire the remainder of Associated's holding which would enable Brush to own more than 50% of National. There was some competition in the two ranges of engines but National was recognised as having expertise in gas engines for which there was growing demand. Brush's annual production of diesels under all the various arrangements amounted to 750,000 h.p., more than any other manufacturer outside the U.S.A. [35].

1951 Rationalization of production sites resulted in movement of heavy diesel engine production from Loughborough. Production of the Petter-Fielding horizontal engines continued to expand at J. and H. McLaren. Production of standard range of small Petter engines at Staines and Burton on the Wolds[38].

1954 Half of Petter engines produced at Staines were air-cooled engines[41].

1955 Name of the Brush ABOE Group would be changed to The Brush Group Ltd[42]. New name and group organisation was implemented with effect from 1 January 1956. Brush Electrical Engineering Co became a subsidiary of the Brush Group, which was a holding company.

1957 Offer received from Hawker Siddeley Group for Brush Group which would help alleviate Brush's shortage of capital. Proposal also made to take-over ASEA Electric Ltd, the UK subsidiary of ASEA of Sweden. Based at Walthamstow, ASEA Electric manufactured transformers and other electrical equipment. Its name would be changed to Fuller Electric Co Ltd[44]. The Brush companies were incorporated into the Hawker Siddeley Group under their trading names. Within the Hawker Siddeley Group the company manufactured a vast range of electrical products including turbo-generators, salient pole machines, induction motors, traction motors and generators, traction locomotives, switchgear, transformers and fuses.

1959 Brush Electrical Engineering Co acquired the rotating machine activities of Veritys Ltd of Birmingham which was in voluntary liquidation[45].

The other activities of the Brush group remained the direct responsibility of Brush Electrical Engineering.

1991 November: Hawker Siddeley Electric Power Group was subject to a hostile takeover bid of £1.5 billion from BTR Industries, the large engineering conglomerate. The bid was successful so the Brush companies then became part of the BTR organisation.

2008 FKI was acquired by Melrose