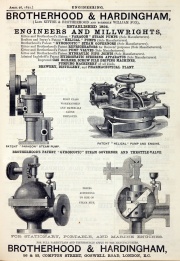 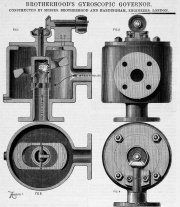 1871 After G. D. Kittoe retired, George Gatton Melhuish Hardingham became the new partner of Peter Brotherhood; the name of the business was changed to Brotherhood and Hardingham .

1872 Peter Brotherhood invented a new type of engine with three cylinders at 120 degrees, the forerunner of the radial engine. Patented 24 January 1873). Exhibited in 1873 at the Agricultural Hall and then in Vienna (see illustration). The first example was used at Woolwich to drive a fan. It rapidly came to be widely used. It would start from any position and ran smoothly. In the first 20 years over 7,500 examples were made.

The good dynamic balance of the new engine made it well suited to driving torpedoes and for powering fans. Its use extended to electricity generation, and driving air compressors and high centrifugal pumps.

1875 The first application of the Brotherhood radial engine to drive a dynamo was on the French warship Richelieu, where the engines also drove centrifugal pumps. In the same year the French chocolate maker, M. Menier, used an engine to drive a Gramme generator to supply an arc light on his yacht when travelling at night between the factory and Paris.[2]

1878 Partnership dissolved. '... the Partnership heretofore subsisting between us the undersigned, Peter Brotherhood and George Gatton Melhuish Hardingham, as Mechanical Engineers, Millwrights, and Ironfounders, at Compton-street, Clerkenwell, Middlesex, under the style or firm of Brotherhood and Hardingham. has been dissolved as from the 31st day of December, 1877; and that the said business will, in future, be carried on by the said Peter Brotherhood alone...'[5]

After this date the business seems to have traded under Peter Brotherhood's name at the Compton Street address. George Blake Oughterson joined as general manager — a position he held until 1897