Grace's Guide is the leading source of historical information on industry and manufacturing in Britain. This web publication contains 143,721 pages of information and 230,103 images on early companies, their products and the people who designed and built them. 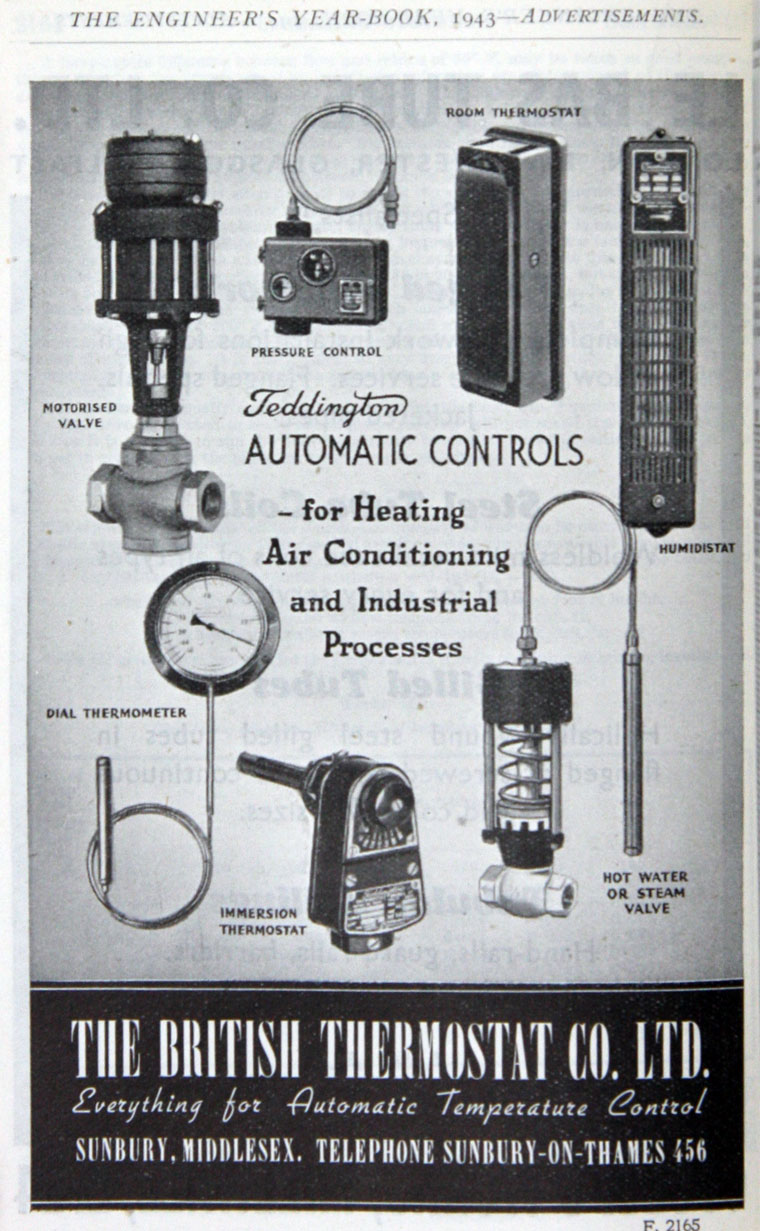 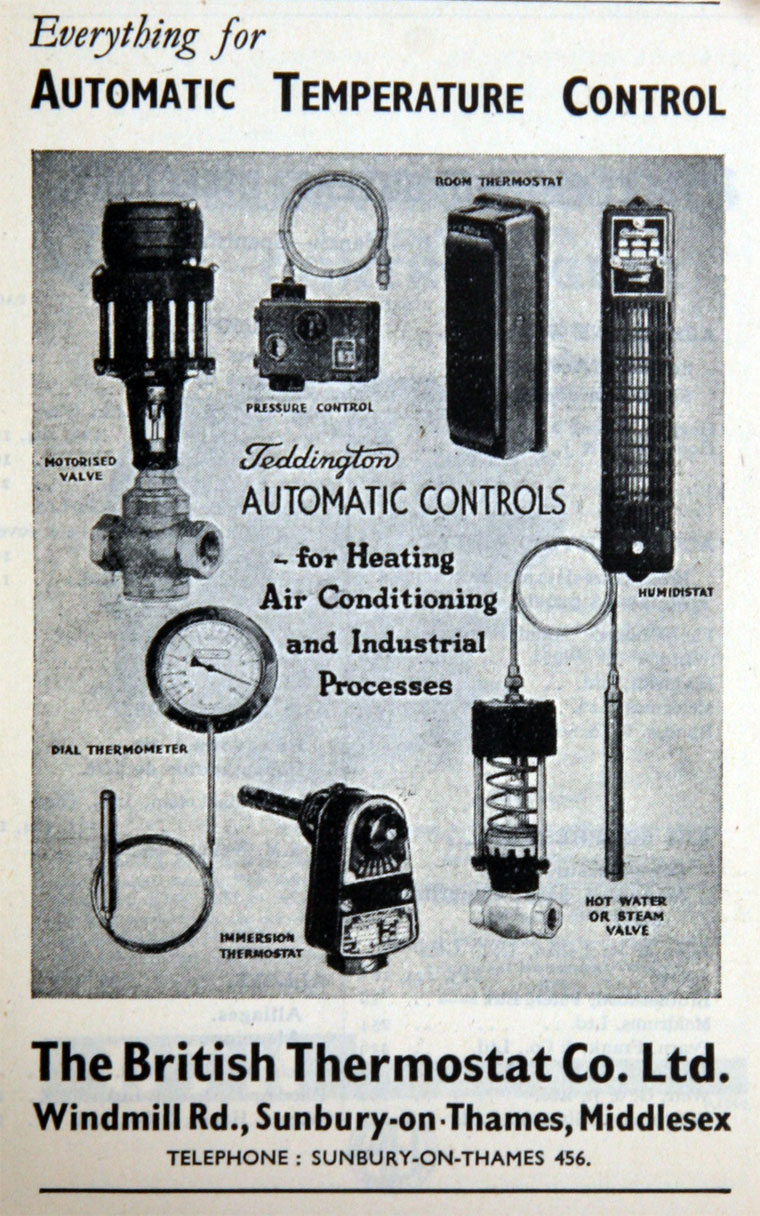 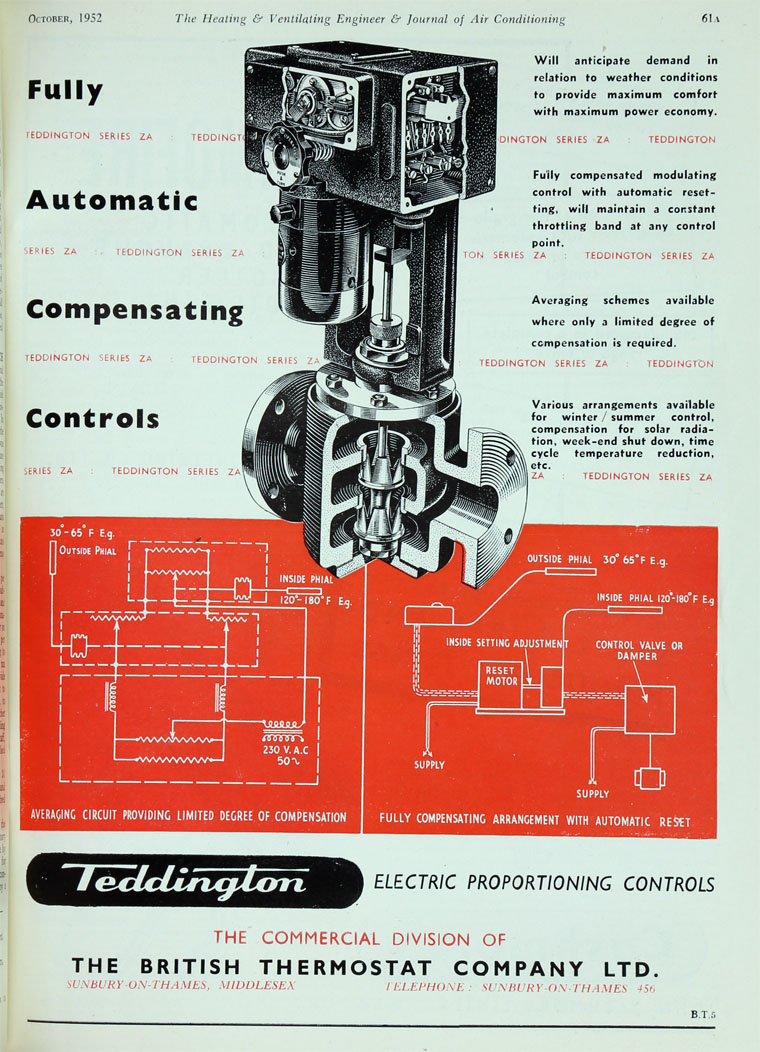 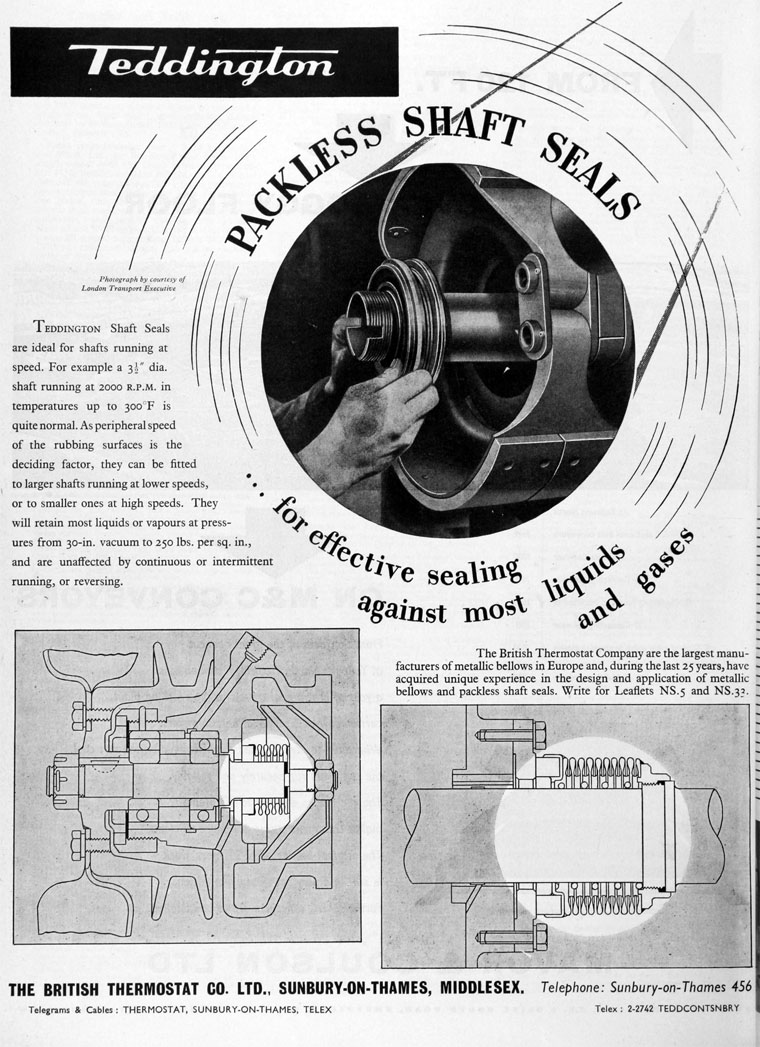 1928 Teddington Refrigeration Controls and Teddington Appliance Controls were set up in Teddington with a payroll of four, producing controls and automatic thermostats. The Company was known as British Thermostat Co Limited.

By 1931 the Company had expanded greatly and moved to new premises at Sunbury-on-Thames, with a payroll of 60. The variety of products grew and included refrigeration controls, car thermostats and seamless metallic bellows of various sizes, which were a speciality of the Company.

1934 The Company collaborated with Rolls-Royce to produce an experimental thermostat for their cars, and a prototype thermostat system that became the forerunner of nearly every system fitted to the Merlin engines during the war. Other equipment was produced for the Spitfire and Hurricane.

WWII. During the war the Company grew considerably with a payroll of 2,300.

Post-WWII. After 1945, all aircraft work was moved to a factory in Merthyr and was known as Teddington Aircraft Controls. The Sunbury factory reverted to its commercial refrigeration business - presumably Teddington Controls.

1951 An assembly company was set up in France.

1962 Due to severe Italian competition production ceased and the French Company, known as Teddington France S. A., confined itself to selling English made products.

Due to a Government ban imposed on development in the South East, a suitable site for expansion was sought elsewhere and finally St Austell was chosen.

By 1967 the first factory section was completed.

1968 A further extension was started.

1974 All Teddington Autocontrols activities had been transferred to St Austell and the machine shop was transferred to a Government factory in Camborne.

1979 The three Companies integrated into Teddington Appliance Controls and in the same year the Camborne factory was closed and component manufacture transferred to St Austell.

1986 It was decided to rationalise the existing factory and office space at St Austell and work started on re-building the upper factory area.

1987 All the offices and machine shop moved into the new areas.

1991 The Company acquired Teddington Industrial Equipment Limited. This led to the transfer to St Austell of the manufacture of Ministry of Defence 'Panels' and additional engine protection controls.

1993 A management buy-out formed a group of 10 companies including Teddington Controls Limited under SLD Holdings.

2000 Vida Group, a group of companies focused on measurement, monitoring and control, acquired the Company in February.