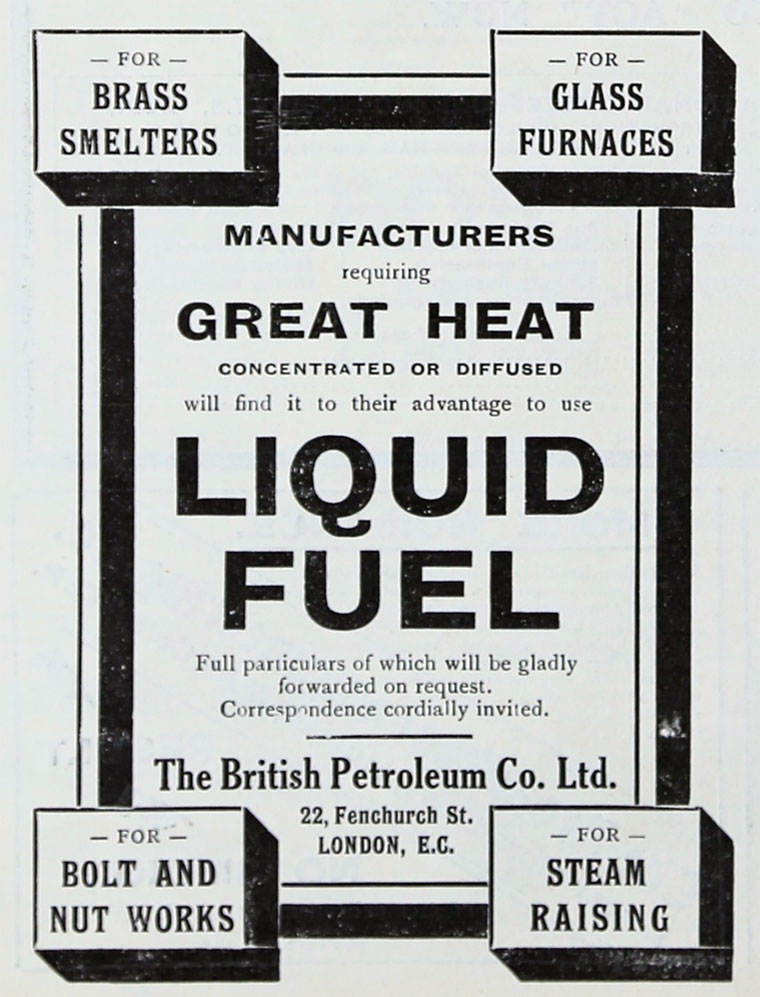 1907 Agreement with Shell Transport and Trading Co to distribute Shell petrol in the UK using Shell storage tanks, etc as agents of Shell[2].

1908 Demonstration by British Petroleum of the use of liquid fuel to power a steam-driven yacht[3].

1909 Use of crude petroleum supplied by British Petroleum in glass manufacturing furnace fitted with the Kermode air-jet system[5].

1909 Brochure promoting the use of liquid fuels in marine, locomotive, electrical generation, metallurgical and other works; also featured Carbogen burners of Hackney and Kermode's burners of Liverpool[6].

1911 Distributed motor spirit in the UK for Shell Transport and Trading Co Ltd[7].

1916 The business was being carried on under supervision of the British government because the directors were German or of other nationalities; there were no British directors[10]. Shell had distribution agreement with British Petroleum which continued until 1917; the German connection was causing great harm to the business so Shell had set up its own marketing company that would handle the marketing of products from 1 January 1917[11].

1917 Became a member of the Pool Board, set up by the government to control distribution of petroleum products[12].

1917 The company was acquired from the Public Trustee by Anglo-Persian Oil Co, together with 2 other companies which had been owned by the same German concern, Homelight Oil Co and the Petroleum SteamShip Co[13].

1954 the board of, what was by then, Anglo-Iranian Oil Co changed the company’s name to the British Petroleum Company.